Stocks are back on top in America’s heart, according to a new Bankrate survey. Nearly 28 percent of Americans point to the stock market as the best way to invest over a period of 10 years or more, more than any other option.

“Despite stocks falling by more than one-third in just over a month at the outset of the pandemic, more Americans point to the stock market as the best place to invest money long-term,” says Greg McBride, CFA, Bankrate chief financial analyst. “The swift rebounds this spring and following a 20 percent decline at the end of 2018 have convinced more investors of the market’s long-term merits.”

Bankrate surveyed 1,007 American adults from June 29 to July 5 about their investment preferences. Below are the main findings from the survey.

Stocks are the most popular long-term investment

The Bankrate survey showed that stocks topped the list of Americans’ favorite investments, garnering almost 28 percent of respondents. Real estate ran a close second, with 26 percent of Americans citing it as their top long-term investment. Real estate’s performance was down from 31 percent in 2019, and fell within the range of the past eight years of polling, McBride says.

The remainder of the responses came back as the following: 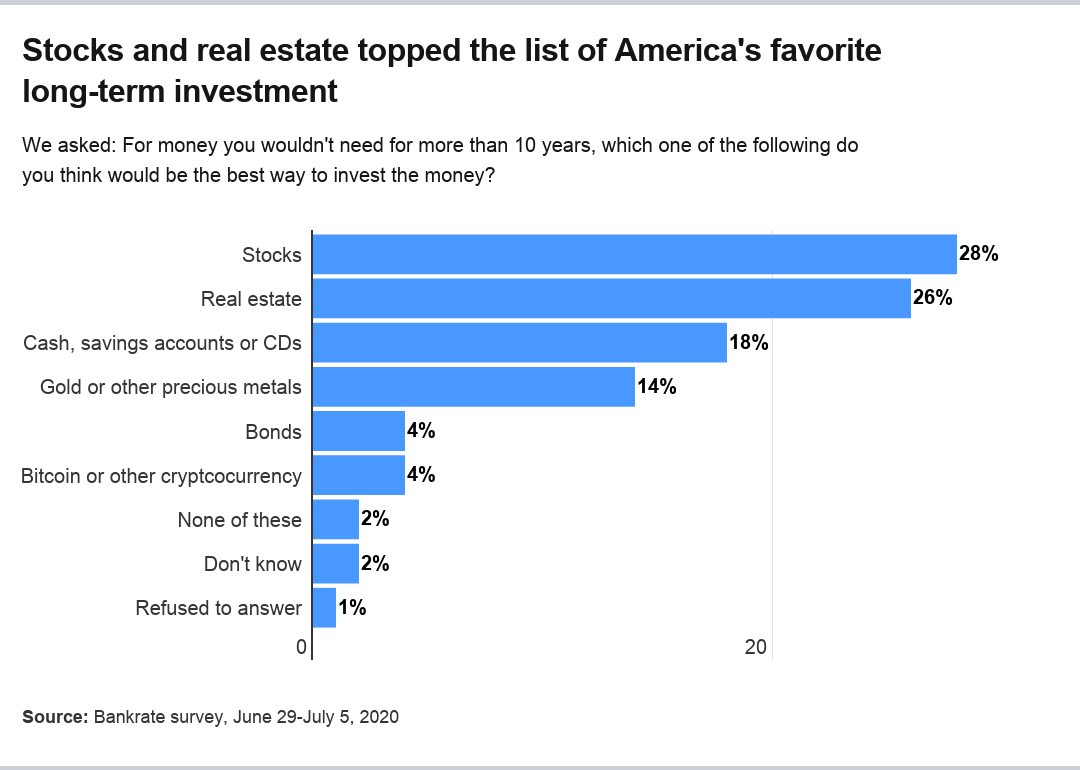 Cash investments came in at 18 percent, down from 19 percent last year, hitting the lowest level in eight years of polling, McBride says. At 14 percent, gold and other precious metals was up for the second straight year. Bonds and bitcoin were cited by just 4 percent of Americans, while 5 percent said either none of these investments, didn’t know or refused to answer the question.

The coronavirus is affecting the choice of top investment

However, a majority of Americans, about 57 percent, said the coronavirus won’t affect their long-term investment strategy.

Of those who did not select the stock market as the best way to invest long term, more than half (54 percent) cite the coronavirus as either a major or minor reason, including 34 percent who said it was a major reason for their decision.

Respondents who chose bonds or gold as their preferred long-term investment were the most likely to cite the pandemic as the reason they are steering clear of stocks, with 43 percent in both cases citing it as a major reason.

Investors who selected either bonds or bitcoin were the only groups where a majority said they would change their long-term investment strategy – either more or less aggressive – due to the coronavirus pandemic.

The results by age group differed sometimes from the overall figures. For example, younger millennials (ages 24-30) were the least likely to prefer the stock market for long-term investments and instead preferred real estate (30 percent).

In contrast, older millennials (ages 31-39) showed among the highest preferences for the stock market (33 percent) and among the lowest for real estate (19 percent). 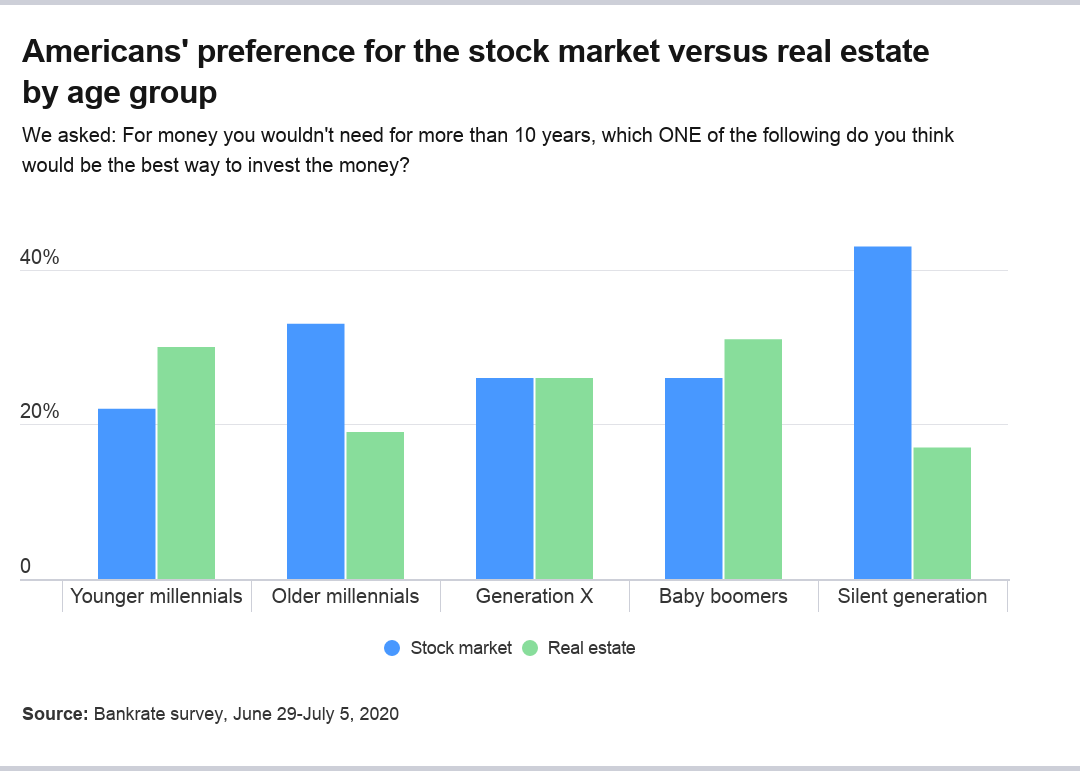 That divide was beaten only by the silent generation, which preferred the stock market at the highest rate (43 percent) and real estate the lowest (17 percent).

Among age groups, Generation X cited cash as a preferred long-term investment the most (22 percent), though overall it still preferred stocks and real estate about equally at 26 percent.

About 1 in 4 millennials (24 percent) said the coronavirus pandemic will prompt them to invest more aggressively over the long term, compared with 16 percent of Gen Xers, 7 percent of baby boomers, and 4 percent of the silent generation.

Cash is fine for the short term, but stocks are better long term

Americans’ preference for cash as a long-term investment is now at its lowest level in the eight years of this Bankrate survey. The switch away from low-yielding cash should ultimately be a net positive for their returns.

“While cash is the best place to park money for the short term, it is a very poor long-term investment,” McBride says. “Whether it is falling interest rates or better returns elsewhere, more Americans are getting that message, with fewer citing cash as the best long-term investment than at any time in the past eight years.”

Cash or cash equivalents such as savings accounts or CDs can be excellent places to store cash for shorter periods, such as less than two or three years. Inside an FDIC-backed bank account you won’t lose any principal, up to $250,000 per account type per bank. Rates are low now, so you’ll want to be sure to max out the rate you can receive by looking at the top-yielding accounts across the U.S., whether you’re searching for a high-yield savings account or CD.

In contrast to the low rates on short-term bank accounts, you may be able to take advantage of the attractive long-term return in stocks. The S&P 500 index, a collection of hundreds of America’s top companies, has delivered returns of about 10 percent annually over long periods. However, in any given year, the returns can fluctuate dramatically.

While the stock market can be a great creator of wealth, it’s important to remember that savvy investors assemble a diversified collection of stocks (such as the S&P 500) and hold their investments through good times and bad. That’s how to approach the market’s long-term return.

The market’s volatility, which we witnessed in early 2020, can scare many investors out of the market just when they should be holding tight or maybe even buying more. However, the price of those higher returns is enduring the market’s inevitable volatility.

This study was conducted for Bankrate via phone interview by SSRS. Interviews were conducted from June 29-July 5, 2020, among a sample of 1,007 adults. Data are weighted and are intended to be representative of all U.S. adults, and therefore are subject to statistical errors typically associated with sample-based information. 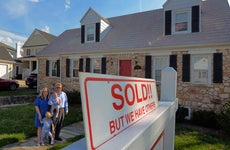 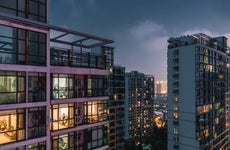 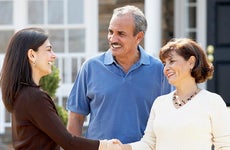 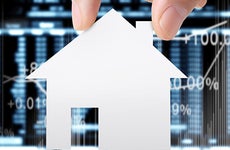