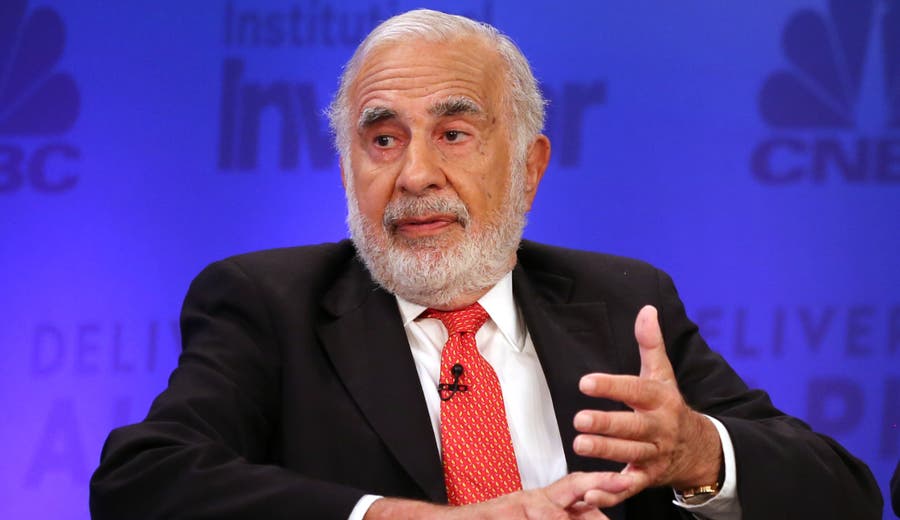 America’s top investors have achieved double-digit returns for years, sometimes decades. Following these top investors is a great strategy for two reasons. First, you can learn how these investors think and operate, potentially raising your own financial IQ. Second, their investments may offer you attractive ideas that you can choose to invest in as well.

From long-time titans such as Carl Icahn (pictured above) to recent superstars like Bill Ackman, here are seven of the most famous American investors and what you might learn from them.

As one of the world’s wealthiest investors, Warren Buffett almost needs no introduction. He’s CEO and chairman of Berkshire Hathaway, a $500 billion conglomerate that acts as the holding company for Buffett’s investments, both its wholly owned companies and its stock investments. You might recognize some of the companies – GEICO, Dairy Queen, See’s Candies – as well as some of the stocks – Wells Fargo, Bank of America, and Apple, among many others.

Buffett has been fabulously successful as an investor, and Berkshire’s stock is a legend in the industry. An investment of $1,000 in 1965, when Buffett took over the company, would have been worth about $27 million as of February 2020. Its “A” series stock currently trades for more than $300,000 a pop, while the B shares trade at a more manageable $200 or so. Buffett racked up such gains first as a value investor and then moved into more of a growth investor. He’s known for his long-term buy-and-hold style and has said that his preferred holding period is forever.

For this performance and his folksy manner – which belies a razor-sharp business acumen –  Buffett is known as the “Oracle of Omaha.” Berkshire’s annual meeting in Omaha is attended by tens of thousands of shareholders and is sometimes called the “Woodstock of Capitalism.”

Charlie Munger is perhaps most famous for being the longtime business partner of Warren Buffett, having assumed the title of Berkshire Hathaway’s vice chairman in 1978. While he’s famous for being Buffett’s right-hand man, he had a successful investing career of his own before joining the Omaha conglomerate and has a longtime practice as a lawyer, too.

At Berkshire’s annual meetings he’s famous for doling out two kinds of responses to shareholders’ questions. First, Munger might offer up a piece of acerbic wisdom on how to succeed in the world. For example, he might suggest that you’re more likely to be happy by setting your expectations low or that you’ll sabotage yourself if you are envious of others and pity yourself. He’s quick to call such strategies of self-sabotage dumb. Second, He may offer a terse “no comment” following a thorough response from Buffett to a shareholder question.

Munger is famous among investors for his intellectual approach to investing and life, often citing the mantra “Invert, always invert.” By this, Munger suggests that investors try to avoid the things they know will lead to failure rather than try to find only the practices that lead to success. By avoiding the sure-fire failures, investors are left with more opportunities to be successful.

Peter Lynch headed up one of the most storied mutual fund successes of all time – Fidelity’s Magellan fund – and racked up a seriously good return. During his tenure from 1977 to 1990, Lynch put up a 29.2 percent average annual return for investors who held on. Unfortunately, many didn’t. And that’s one of the key lessons that Lynch had to teach investors: Money chases the hot funds from year to year, so it can easily miss a rebound in a fund run by a good manager.

Lynch authored two classic investing books – ”One Up on Wall Street” (1989) and “Beating the Street” (1994) – and he’s perhaps most famous for his common-sense approach to investing. For example, one of Lynch’s most famous pieces of advice is “buy what you know.” By this he means that you should see what types of goods and services are becoming popular with your friends and family, because that may suggest a newly emerging company.

Bill Ackman runs Pershing Square Capital Management, and he’s one of the high-profile investors of the last decade. He’s made a number of big bets, and he’s not shy about going into the media to publicize them. One of Ackman’s first wins was his bet against mortgage insurer MBIA, which paid off during the financial crisis. He cleaned up on mall operator General Growth Properties and real estate play Howard Hughes Corporation, where he’s chairman of the board.

But while he’s known for such successes, he’s also experienced some tumbles, including highly publicized bets on a turnaround at J.C. Penney and a short position on Herbalife. His position at Herbalife would profit if the stock declined substantially or, as he alleged, if the company were a Ponzi scheme. In a tense confrontation with Carl Icahn (next on the list), Ackman made his case against the stock, which ended up spectacularly wrong, losing nearly a billion dollars. After being proven wrong, Ackman continued to hold, showing that even the greats make mistakes.

Carl Icahn is as tough as investors come, and this one-time Princeton philosophy student is known as one of the original corporate raiders of the 1980s. These investors used techniques such as greenmail (asking a company to buy back its stock from the investor at a high price in exchange for the investor leaving the company alone) to wring profits from companies. While Icahn has eschewed such techniques for many years, he’s been no less active in buying up companies, selling off divisions and forcing the sale of other companies. He’s been one of the most successful activist investors on the planet and is well known for his hard negotiating style.

Icahn famously took the other side of Ackman’s trade on Herbalife, called him a “liar” and “crybaby” on national TV and ended up making a fortune by buying up a huge chunk of the stock and holding for years. He took a bath on rental car company Hertz, however, basically wiping out a $1.8 billion investment there as the company announced bankruptcy in 2020.

Ben Graham is hailed as the father of value investing, an approach that tries to buy $1 in value for $0.75 or even less. He brought intellectual rigor to the practice of investing, and is also famous as the early instructor of Warren Buffett. His investing principles are laid out in the weighty tome “Security Analysis” (with co-author David Dodd) and “The Intelligent Investor,” one of the most perennially popular investing books because of its clarity and straightforwardness.

In the latter book, Graham introduces the character of Mr. Market, a metaphor for how the market works and an attempt to show how manic the market can be. One day Mr. Market may be willing to sell you a stock for low price but some days he decides to ask a high price, and you might never know which Mr. Market shows up. Graham is associated with “cigar butt investing,” an approach where there’s a puff of value left in a stock but little downside in buying it.

George Soros is one of the most famous investors on the planet, but he’s more a trader or speculator than an investor. That is, he takes positions (often hundreds of them) and looks to profit when a stock moves. He’s typically not an investor who buys to hold, as Warren Buffett often will. Instead, Soros will trade in and out of a position, and he’s not afraid to buy right back into a position that he’s just sold if new information makes him think it will move higher.

Soros is known as “The Man Who Broke the Bank of England” because of his massive 1992 bet against the U.K. pound sterling that reportedly netted him a $1 billion profit. Soros is also known for his application of the principle of reflexivity to financial markets. A key idea here is that markets can create their own successes or failures merely through the belief of investors. So if investors continue to fund a money-losing business through tough times, they may eventually allow it to succeed. Similarly, if they withhold money from a struggling business, they may cause it to fail. So belief can end up creating a self-fulfilling prophecy for the company, regardless of the reality.

Following the lives of famous investors is a great way to piggyback off their learning and decades of experience so that you might be able to skip some of the hardest and most expensive investing lessons. Why endure these costs if you can learn your way out of them?