Skip to Main Content
4 minute read Published November 14, 2022
Written by
Brian Baker
Written by Brian Baker Investing reporter
Bankrate reporter Brian Baker covers investing and retirement. He has previous experience as an industry analyst at an investment firm. Baker is passionate about helping people make sense of complicated financial topics so that they can plan for their financial futures.
Brian Baker
Edited by
Brian Beers
Edited by Brian Beers Managing editor
Brian Beers is the managing editor for the Wealth team at Bankrate. He oversees editorial coverage of banking, investing, the economy and all things money.
Brian Beers

Warren Buffett is arguably the world’s most famous investor, and his investment moves are closely followed. Each quarter, the company he runs, Berkshire Hathaway, discloses its current holdings to shareholders.

Here are some of the changes Buffett and his two investment officers, Todd Combs and Ted Weschler, made during the third quarter, according to the latest 13F regulatory filing with the Securities and Exchange Commission. The holdings are reported as of Sept. 30, 2022. At that time, the S&P 500 had declined about 25 percent for the year.

A new stake of nearly $300 million was announced in Louisiana-Pacific, a building solutions company that serves new home construction, repair and remodeling markets. The Nashville-based company operated 25 plants across the U.S., Canada, Chile and Brazil as of Dec. 31, 2021.

Berkshire added to its existing position in Paramount Global, which operates film and television studios, cable networks such as MTV and Nickelodeon, and the CBS Network. Berkshire held 91.2 million shares at the end of September, up from 78.4 million shares in June.

Berkshire added slightly to its Chevron holdings during the quarter, adding nearly 4 million shares to its already-large holding, increasing its stake to 165.4 million shares at the end of September. The company is one of Berkshire’s five largest holdings and comes with a dividend yield above 3 percent. Chevron has benefited from higher energy prices and reported $11.2 billion in earnings during the third quarter of 2022, up from $6.1 billion in the same quarter last year.

Berkshire also added to its position in Celanese, a materials provider to the chemicals, paints, and coatings industries. Berkshire held about 9.2 million shares at the end of the second quarter, and boosted that to more than 9.7 million shares in the latest quarter.

Berkshire increased its stake in furniture retailer RH, which operates the Restoration Hardware stores, by about 9 percent during the third quarter. The position was worth about $580.1 million at the end of September.

Berkshire also established a new position in Jefferies Financial Group, which is involved in capital markets, investment banking and asset management. The position was worth almost $13 million at the end of September.

Berkshire cut its position in U.S. Bancorp by more than one-third, reducing its stake from 119.8 million shares at the end of the second quarter to 77.8 million at the end of September. Berkshire has held a stake in the bank for more than 15 years.

Berkshire reduced its stake in video game maker Activision Blizzard, which has agreed to be acquired by Microsoft for $95 per share in cash. Berkshire now holds 60.1 million shares, down from 68.4 million at the end of the second quarter. Buffett said at Berkshire’s annual meeting in April that he established the position as an arbitrage bet on the deal’s closing. Activision recently traded for around $74 per share, and the companies expect the deal to close by mid-2023. EU antitrust regulators recently announced an investigation into the deal.

Berkshire trimmed its position in Bank of New York Mellon by about 14 percent during the third quarter, cutting its stake by more than 10 million shares. The investment was worth about $2.4 billion as of the end of September.

General Motors also saw its shares slashed by Berkshire, reducing holdings by about 5 percent quarter over quarter. The stake fell from about 52.9 million shares in the second quarter to 50 million at the end of September.

Berkshire further reduced its holdings in the large grocer Kroger, paring its stake by a little over 4 percent. Berkshire trimmed more than 2.1 million shares from its position during the third quarter, leaving a stake that was valued at about $2.2 billion. Kroger announced in October its plan to acquire rival Albertsons in a $24.6 billion deal it said would help it better negotiate with vendors.

Berkshire eliminated its position in STORE Capital during the third quarter. The position was first purchased during the second quarter of 2017 and was worth more than $430 million at the end of March. The real estate investment trust, or REIT, currently has a dividend yield above 5 percent and a market cap of nearly $9 billion.

Berkshire takes a concentrated approach with its investments, typically holding the majority of its portfolio in just a few companies. Its top holdings at the end of the third quarter accounted for 73 percent of the portfolio’s value, and included these top five positions:

Buffett spent about $5.2 billion repurchasing Berkshire stock in the first nine months of 2022. This is an indication that he believes the shares are undervalued and continuing shareholders will benefit from the buybacks.

Buffett and Berkshire have an excellent track record in selecting investments, but be sure to research any investments thoroughly before investing yourself. Even stocks owned by legendary investors decline and you’ll need to understand the businesses you’re invested in well enough to make a buy, hold or sell decision on your own. 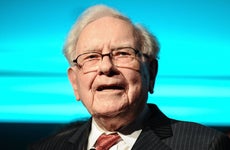 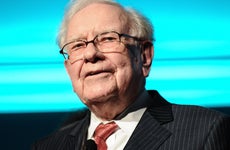 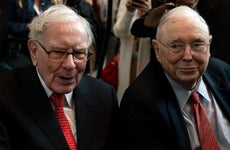 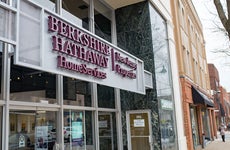 How to buy Berkshire Hathaway stock