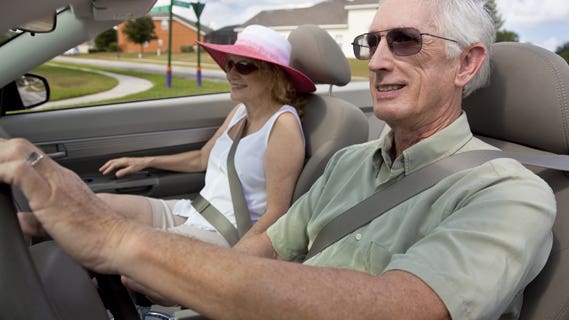 It’s the driving that prompted this post. In researching tips on what snowbirds should do in preparing their northern homes for winter (a post I’ll save for next fall), I read an article that said that Florida requires anyone who has a vehicle in the state of Florida for more than 90 days per year has to register the car in Florida and meet the state’s minimum car insurance requirements. To make matters worse, the day count isn’t 90 consecutive days.

In the first year, snowbirds may catch a break since the time spent is likely to cross two years with less than 90 days in each year. It’s when they repeat that migratory pattern in year two that there can be a problem.

U.S. residents don’t need a Florida driver’s license but Canadian residents who are snowbirds need a U.S. driver’s license. A spokeswoman for the Florida Department of Highway Safety and Motor Vehicles said that Canadian snowbirds face the same registration and car insurance requirements as those for residents of other U.S. states.

Some U.S. snowbirds make Florida their primary residence to enjoy the fact that there’s no state income tax. Those snowbirds would need to register their vehicle in Florida and have a Florida driver’s license.

While this post has focused on Florida law, snowbirds who migrate to other southern states should check with that state’s department of motor vehicles to see what’s required in the way of registration and insurance on their vehicle while enjoying the mild weather. If it sounds like too much of a bother, think of what could happen if your car insurance company won’t pay a claim because you misrepresented the location of your car.

I’ll also suggest that minimum car insurance coverage isn’t likely to be the best answer when insuring your vehicle. The best decision is likely to be to carry the same coverage you have in your home state. Accidents can happen anywhere.

If you’re a snowbird, what do you do about you car’s registration and insurance?