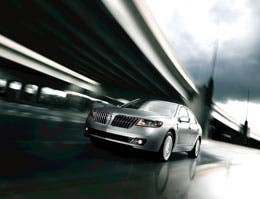 Most of the time, when you buy a hybrid car, you know you’ll be paying a higher sticker price in the hopes that you’ll make up the difference by saving on gas over the life of the car. Now Ford is changing the equation; the hybrid version of its MKZ sedan will cost the same as the nonhybrid V-6 version.

If you’re already considering buying an MKZ, this move makes choosing the hybrid version a no-brainer from a financial perspective. Based on the hybrid system developed for the Ford Fusion, the hybrid MKZ gets a combined rating of 39 mpg; the conventional V-6 version gets a combined 21 mpg. The EPA estimates the annual fuel cost of the conventional model will be $1,942, assuming you drive 15,000 miles a year. In contrast, the agency pegs the fuel cost for the hybrid at $1,044, a savings of nearly $900 a year.

Of course, there is a significant performance penalty for choosing the hybrid. Combined, the electric and gas motors in the hybrid MKZ produce 191 horsepower; the standard gas MKZ generates 263 horsepower. But for a lot of people, the financial and environmental advantages of the hybrid will outweigh performance.

I’m not sure if this move is a game changer. It may put pressure on other automakers to follow suit and narrow the difference in cost between hybrid and conventional models, but I see this as more of a “loss leader” type of move from Ford. They’re trying to rebuild the Lincoln brand, and this move makes the MKZ a considerable bargain over its luxury hybrid competitors.

But I doubt other luxury automakers will follow suit with an entirely free hybrid option. The batteries, electric motor and other machinery needed to build a hybrid simply cost more than conventional engines right now, and other brands probably won’t want to let that cost eat into their profit margins.

From the Detroit Free Press:

“The Lexus HS 250h, the MKZ’s closest competitor, costs about $2,500 more than the Lexus IS, a similar, small, gas-powered sedan. Ford charges $8,840 more for the hybrid version of its Ford Escape SUV.”

What do you think? Would this move make you more likely to buy an MKZ?