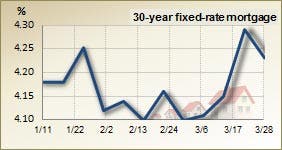 Mortgage rates dropped this week, as the latest economic data disappointed investors and the Fed reminded them that the economy is far from recovery.

The benchmark 30-year fixed-rate mortgage fell to 4.23 percent, compared to 4.29 percent the previous week, according to the Bankrate.com national survey of large lenders. The mortgages in this week’s survey had an average total of 0.39 discount and origination points. One year ago, the mortgage index was 5.01 percent; four weeks ago, it was 4.10 percent.

Results of Bankrate.com’s March 28, 2012, weekly national survey of large lenders and the effect on monthly payments for a $165,000 loan:

“It was a pleasant surprise,” that rates improved in recent days, says Michael Becker, a mortgage banker at WCS Funding in Baltimore.

As the stock market rallied last week, investors pulled their money out of government bonds in search of higher returns. That led to a spike in rates. But the upward trend reversed as Federal Reserve Chairman Ben Bernanke injected a dose of reality into the markets during a televised interview Tuesday. Bernanke says it’s far too early “to declare victory” in the U.S. economic recovery.

“We haven’t quite got to the point where we can be completely confident that we’re on track to a full recovery,” he says.

Consumers seem to share his view. The Consumer Confidence Index dropped 1.4 points to 70.2 in March, as consumers worried about inflation and rising gas prices.

The latest data on the housing market were dismal.

The pace of home sales also slowed down a bit in February, according to the National Association of Realtors. The Realtors index slipped 0.5 percent in February, but it remained significantly better than a year ago.

As investors continue to get mixed signals on the local and global economy, mortgage rates will fluctuate, Becker says.

“We might be entering another period of volatility, which is scary because we got so complacent with rates being in a tight range for a while,” he says.

“There is going to be a lot of volatility,” he says. “The next couple of days could be the best time to lock in. Beyond that, we’ll probably get a wave of ups and downs. The summer will be a real turning point for rates.”

Borrowers must get off the fence

Borrowers who think they should wait for better rates and homebuyers who want to wait for lower prices shouldn’t take the chance, Habib says.

“Would you rather buy a little higher at a much lower rate or a bit cheaper at a much higher rate?” he asks.

But many borrowers, including refinancers, seem to have gone on a waiting mode in recent weeks.

The decline in the number of applications comes as a surprise because industry experts expected a surge in refinances once HARP 2.0 rolled out.

“We’ve taken over 400 applications for HARP 2.0,” he says. “We’re extremely busy, and some lenders have increased their underwriting period from four days to 20 days.”