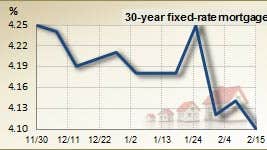 Mortgage rates fell this week and set a new record low — again — as investors welcomed recent improvements in the U.S. economy, while wondering if Greece really is near a deal to solve its debt problems.

The benchmark 30-year fixed-rate mortgage fell 4 basis points this week to 4.1 percent, according to the Bankrate.com national survey of large lenders. A basis point is one-hundredth of 1 percentage point. The mortgages in this week’s survey had an average total of 0.35 discount and origination points. One year ago, the mortgage index was 5.16 percent; four weeks ago, it was 4.18 percent.

This is the lowest the rate on the 30-year fixed has reached in the 26-year history of Bankrate’s weekly rate survey. The previous record was 4.12 percent on Feb. 1.

Recent economic reports show the economy is strengthening, and that’s “supposed” to be pushing rates up, says Michael Becker, a mortgage banker at WCS Funding in Baltimore. “But Greece seems to be holding them down.”

Another somewhat positive sign for the economy was the housing report by the National Association of Homebuilders, released Wednesday. The NAHB’s housing market index climbed to 29 in February from 25 in January. That’s the highest the index has reached since May 2007. The index measures builders’ assessments of current single-family home sales, traffic from potential buyers and sales expectations for the next six months.

“This is the longest period of sustained improvement we have seen in the HMI since 2007, which is encouraging,” says David Crowe, NAHB chief economist. “However, it is important to remember that the (index) is still very low, and several factors continue to constrain the market. Foreclosures are still competing with new home sales, and many builders are seeing appraisals come in at less than the cost of construction. Additionally, prospective homebuyers are finding it difficult to qualify for a mortgage.”

The January retail sales report, also released this week, was less than what economists had expected, but it shows sales picked up slightly. Sales rose 0.4 percent last month, according to the Commerce Department. While that’s a slight increase, it’s better than December, when sales were flat.

Thank the Greeks for the low rates

“The numbers coming out seem to show the economy is turning the corner a bit,” says John Walsh, president of Total Mortgage in Milford, Conn. But until investors feel confident about the debt situation in Greece, they will leave their money parked in safe investments such as U.S. Treasury bonds, he says. When investors seek safety in bonds, mortgage rates tend to drop.

On Wednesday, Greek leaders agreed to terms of a new financial bailout to prevent the country from defaulting on its debt. Investors were hopeful a deal would be reached soon, but there is talk that some of Greece’s eurozone creditors may delay the bailout until after Greek elections in April.

“That’s adding to the uncertainty,” Walsh says. “Once (the bailout) is approved and implemented, you could see rates go back up a little, maybe a half of a percentage or so.”

For those who are trying to decide whether to refinance now or wait, Walsh says:

“If it makes sense to refi today, do it,” he says. “You never know what’s going to happen to home values, interest rates and underwriting guidelines.”