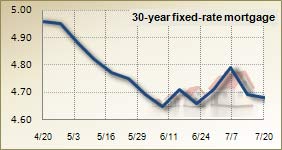 Mortgage rates barely changed this week as investors grew increasingly anxious about the looming threat of a U.S. debt default.

The benchmark 30-year fixed-rate mortgage fell 1 basis point this week, to 4.68 percent, according to the Bankrate.com national survey of large lenders. A basis point is one-hundredth of 1 percentage point. The mortgages in this week’s survey had an average total of 0.39 discount and origination points. One year ago, the mortgage index was 4.74 percent; four weeks ago, it was 4.66 percent.

Many investors remain in wait-and-see mode as Congress tries to hatch a budget deal to shrink the deficit and raise the $14.29 trillion debt ceiling. But with 11 days left before the Aug. 2 deadline set by Treasury, they are becoming more nervous about the situation, says Kevin Breeland, general manager of Residential Mortgage of South Carolina in Mount Pleasant, S.C.

Results of Bankrate.com’s July 20, 2011, weekly national survey of large lenders and the effect on monthly payments for a $165,000 loan:

There is no question mortgage rates will spike if the United States defaults on its debt, Breeland says, but rates might rise even before the deadline.

“If they are not close to a deal by the end of this week, we’ll start seeing the effect on rates early next week,” Breeland says.

Even if Congress works out a deal in the eleventh hour to avoid default, rates could still spike temporarily, he says.

“This situation is making foreign investors uncomfortable” with the U.S. bond market, he says. Once investors lose confidence and pull out of the bond market it will take a few weeks to rebuild trust and for rates to stabilize, he says.

Reaching a deal and simply raising the debt ceiling without significant cuts in spending won’t be enough to hold rates down, says Brett Sinnott, director of secondary marketing for CMG Mortgage in San Ramon, Calif.

“A lot is going to depend on the scope of the agreement,” Sinnott says. “A little Band-Aid fix may boost investors’ confidence on the short term, but when people realize there was no major fix we’ll see a big falter in confidence.”

When investors lose confidence and pull out of the U.S. bond market, Treasury yields have to be raised to attract investors back. That normally translates into higher mortgage rates.

On Tuesday, President Barack Obama indicated he would support a plan submitted by a bipartisan group of senators, known as the “Gang of Six.” The plan calls for about $3.7 trillion in cuts over a decade or more. It’s unlikely the plan will be approved without changes, and some fear it would not pass before the Aug. 2 deadline.

Amid all this uncertainty, mortgage rates have not changed much compared to last week, but that doesn’t mean the mortgage market has remained stable.

“They are up and then the next minute, they are down,” he says. “They are all over the place.”

The volatility frustrates potential borrowers as they shop around for rates.

“Sometimes they don’t understand it,” Becker says. “They’ll get a (quote) in the morning and then when they call back the rate has changed and they’ll say, ‘What happened to rate you gave me earlier?'”

As with others in the mortgage industry, he recommends not taking the risk of an unstable market and locking into a rate as soon as you feel comfortable with it.