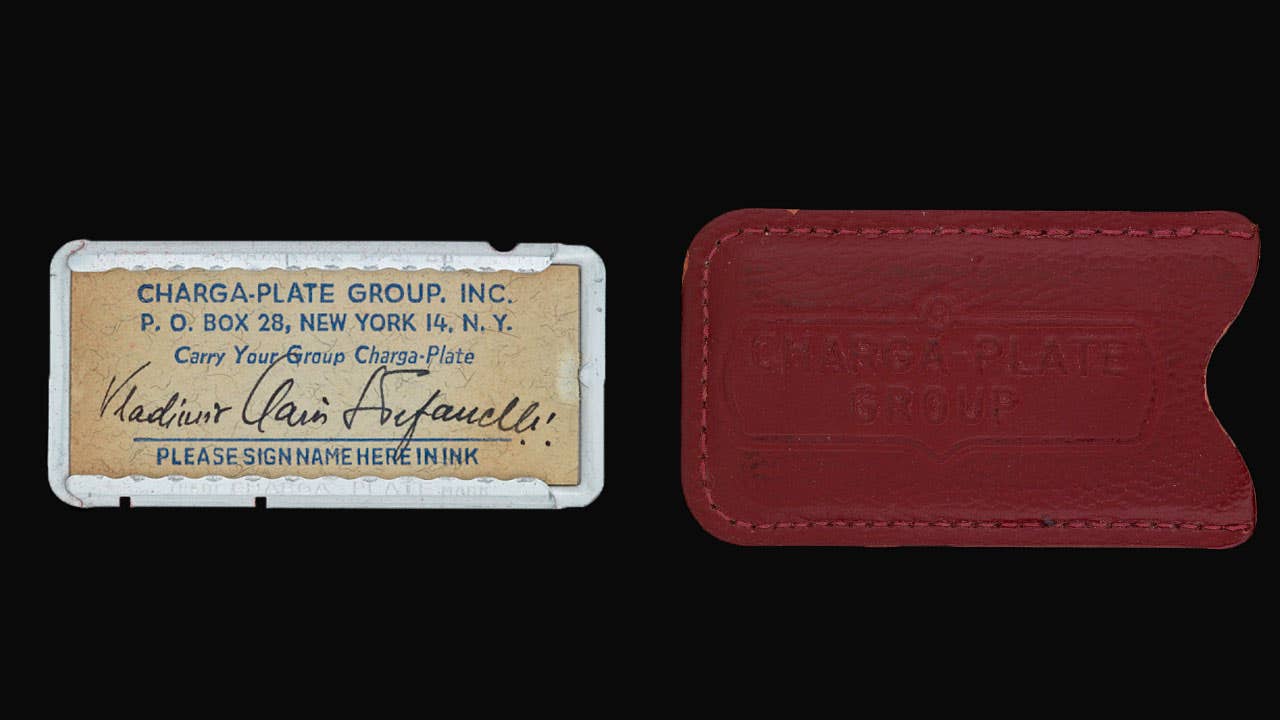 Courtesy of The National Museum of American History

Meredith Hoffman
Edited By
Brady Porche
Edited by
Brady Porche
Managing Editor
“If you’re a credit card user and you want to avoid getting into debt, it’s critical to create a budget and stick to it. Avoid spending more with your card than you can pay…

Today, the wide use of credit cards seems like second nature. When you leave the house you grab the essentials: keys, a cell phone and your wallet. Maybe there’s some cash in your wallet along with your ID and other needed cards, and for 79% of American adults, there is also another staple: a credit card.

The convenience of the modern credit card makes it hard to imagine a time without it, but for much of human history systems of credit—whereby one party lends money or resources to another party and does not expect immediate reimbursement—were handled verbally or written down in some form of ledger.

It was not until the early 1800s that any form of “credit card” existed, and even then, it came in the form of heavy metal plates rather than the sleek plastic (or completely digital) design we appreciate today.

The ancient history of credit

Economies that thrived on credit are older than money itself. During the Bronze Age, almost all economic transactions took place on what we would now consider a line of credit. This system of credit existed because the space between planting a crop and harvesting the crop was spread out over months. According to American economist Michael Hudson, our ancient ancestors would often rack up debt while their crops were growing that they would then pay off when harvest time came.

The first recorded transaction that laid a foundation for our modern credit card system occurred over 5,000 years ago when the ancient civilization of Mesopotamia used clay tablets to trade with the neighboring Harappan civilization.

Fast forward a few thousand years to the United States in the early 1800s and you can find further examples of credit card-like systems. The invention of payment methods called credit coins and charge plates were used by merchants in the budding Wild West to give farmers credit until their crops were harvested for the season.

From metal plates to the Charg-It card

The beginning of the 20th century saw further advancements in the concept of a modern credit card system when Western Union began to issue metal plates to a select group of their customers.

These metal plates allowed the consumer to defer payments on charges they had incurred until a later date. The metal plates issued by Western Union were like modern credit cards in concept, but they were highly limited when compared to their contemporary counterparts and could only be used by a select group of customers on certain transactions.

In 1946 metal plates became obsolete when a Brooklyn banker named John Briggins had the idea for a new type of payment method called the “Charg-It card”. The Charg-It card used Biggins’s bank as a go-between for transactions so that the bank initially paid merchants for items purchased by the consumer and was then paid back by the owner of the Charg-It card later. Briggins’s Charg-It card was the first example of a closed-loop credit card.

The dawn of modern credit cards

The first example of the credit card as we know it today is often credited to a man named Frank McNamara and his business partner Ralph Schneider, who created the “Diner’s Club” in 1949.

As the story goes, Frank McNamara was dining at Major’s Cabin Grill restaurant in New York City but when it came time to pay the bill, he realized he had forgotten his wallet at home. Though versions of the story vary, it is said that McNamara got out of having to wash dishes in the back of the restaurant by signing that he would come to pay his bill the next day.

This incident gave McNamara the idea for the first credit card – an idea that he then pitched to his friend Ralph Schneider, with whom he would go on to start the Diner’s Club.

The Diner’s Club started with cardboard cards that select men could use at 27 participating restaurants. When the Diner’s Club was formed it had 200 members who were primarily friends and acquaintances of Schneider and McNamara.

The Diner’s Club would go on to be the first credit card that was accepted outside of a limited geographic area, and within two years its 200 initial members would grow to an astonishing 42,000 all over the United States.

The plastic credit card as we know it today

American Express made the first plastic credit card in 1959 and it was quickly followed by Bank of America, Carte Blanche, Diner’s Club and other newly formed credit card companies.

A solution came when Parry took the card home and complained about the problem to his wife who then suggested he try to iron it onto the card. The iron proved to be hot enough to melt the magnetic strip into the card, and the invention was soon adopted by credit card companies as a tool for both convenience and security.

As time went on the credit card industry continued to innovate and increase security measures. EMV—an acronym for Europay, Mastercard and Visa—is a chip and pin card design that was invented in 1990 and began being used by the general public in 1993.

Chips embedded in credit cards increase the security of the card by generating a unique encrypted code each time you use your card in a transaction.

Legislation in the credit card industry

While the relatively new industry centered around credit cards was growing steadily from 1951 until the late 1960s, it was not a perfect system. Early credit card companies were often discriminatory and would not extend lines of credit to African Americans. Additionally, women were not allowed to get a credit card without a male co-signer until 1974.

The pitfalls of the credit card industry didn’t only impact women and minorities. Before 1970 there was little to no regulatory legislation protecting card owners in the United States. This meant no terms and conditions, no standard calculation of APR and no protection against predatory debt collection.

In 2009, the credit card industry was rocked once again by legislation centered around protecting card owners against excessive fees and penalties. The Credit Card Accountability Responsibility and Disclosure Act of 2009 was passed with bipartisan support and signed into law by President Barack Obama.

Also known as the CARD Act, this legislation protects consumers by making it illegal for credit card companies to change interest rates on existing accounts and drastically reduced “over-limit” fees.

The future of credit cards

The history of credit cards is long, with many trials and errors along the way. As time progressed so did systems of credit and eventually the credit card itself. From verbal agreements to clay tablets to metal charge plates, the ancestors of the modern credit card were as diverse as they were inconvenient.

The 20th century gave rise to a new age of credit systems and the invention of a modern and far more practical credit card, but with it came discriminatory business practices and predatory debt collection.

Today, the credit card industry is far more regulated and equitable than its predecessor and it is still growing and transforming. Physical credit cards are transforming, and a new generation of consumers seems to be favoring solely digital banking options.

As time goes on the future of the credit card is not set in stone. But if looking at history gives you any indication, it’s here to stay.

Read more From Meredith
Meredith Hoffman is a personal finance writer covering credit card news and advice at Bankrate. She is originally from Columbia, S.C., and received her bachelor's degree from the Univ. of North Carolina at Wilmington. Before joining Bankrate in October 2019, Meredith worked as the news editor of Wilmington’s local newspaper, The Seahawk.
Edited by
Brady Porche
Managing Editor