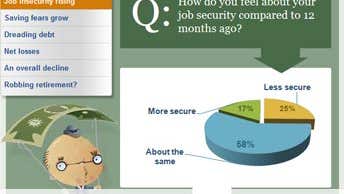 Nearly one-fifth of full-time employed Americans have raided retirement accounts in the past year to cover emergencies, according to a national Bankrate survey.

Despite increasing signs of a stabilizing U.S. economy, 19 percent of Americans — including 17 percent of full-time workers — have been compelled to take money from their retirement savings in the last year to cover urgent financial needs, the Financial Security Index found.

Though 80 percent of full-time workers didn’t dip into retirement funds, far too many consumers are ill-prepared for emergencies, says Kim McGrigg, manager of community and media relations at Money Management International, a credit counseling agency.

“Perhaps the most alarming thing about these numbers is that they suggest a lack of other options,” she says. “Consumers generally consider using retirement funds only as a last resort.”

Michael Masiello, founder of the Masiello & Associates wealth management firm in Rochester, N.Y., agrees. “I believe that 17 percent of full-time workers taking early withdrawals is a higher than normal number, and it’s certainly higher than it should be,” he says.

The potential consequences of tapping retirement funds include early withdrawal fees, taxes and the loss of compound earnings — not to mention the prospect of being unable to retire.

While workers might be able to replenish the funds pilfered from tax-advantaged accounts once they regain their financial footing, one of the main benefits of long-term savings is time and compound interest. An early withdrawal of $10,000 is not just $10,000. It’s actually $10,000 plus whatever that money would have earned over the lifetime of the account. Furthermore, with penalties and taxes an early $10,000 withdrawal may only yield $6,500 if you’re in a 25 percent tax bracket.

Compounding gains turns money into a snowball, gaining size as it rolls forward. Without the advantages of compounding, workers who take an early withdrawal will later need to sock away more savings than they otherwise would have in order to fund retirement.

While it’s fortunate that people do have the retirement savings to fall back on when they absolutely have no alternatives, they may be just delaying the day when they truly have no more resources and working is no longer be an option.

“That’s the scary thing. People are turning to this as a last resort; they have exhausted their other resources. At that point there is very little in the way of alternatives,” says Greg McBride, CFA, senior financial analyst at Bankrate.com.

In the years leading up to the recession, the easy availability of credit and plentiful home equity meant consumers could coast through emergencies with little money saved for a rainy day. But the Great Recession reaffirmed forgotten lessons from the Great Depression. Namely, saving money, minimizing debt and forgoing borrowing are the best insulation from financial adversity.

The survey suggests Americans increasingly feel their emergency preparedness is not what it should be. This month’s Financial Security Index plunged to 93.5 from 97 in March.

“Consumers are pessimistic on all five components of financial security. When you look at gasoline prices closing in on $4 a gallon and other events taking place around the globe, it can be unsettling.”

The PSRAI April 2011 Omnibus Week 1 obtained telephone interviews with a nationally representative sample of 1,004 adults living in the continental United States. Telephone interviews were conducted by landline (673) and cell phone (331, including 138 without a landline phone). The survey was conducted by Princeton Survey Research Associates International, or PSRAI. Interviews were done in English by Princeton Data Source from April 7-10, 2011. Statistical results are weighted to correct known demographic discrepancies. The margin of sampling error for the complete set of weighted data is ±3.7 percentage points.