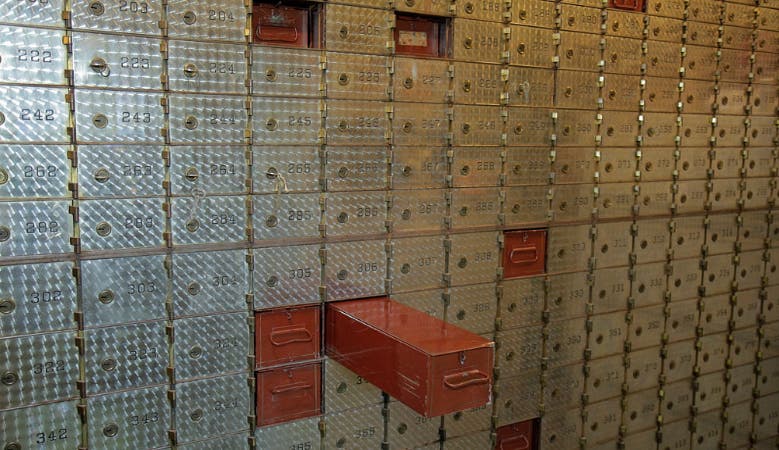 If you want to be savvy with your safe deposit box, here’s what you should know.

What is a safe deposit box?

A safe deposit box is a secure container usually made of metal that’s used to store valuables at a bank or credit union. These boxes are often kept in vaults and can be rented throughout the lifetime of a customer for an annual fee.

Modern safe deposit boxes have been around since the mid-1800s. Some banks today consider them to be an outdated service and have stopped offering safe deposit boxes altogether. But there’s still a demand for them, says Dave McGuinn, president and founder of Safe Deposit Specialists.

“My clients typically are the consumer banks, the credit unions,” McGuinn says. “They’re expanding their vaults, because they have waiting lists for some of the larger-sized boxes, and they just can’t help the client or the consumers when they come in with those requests. So they’re actually expanding the size of vaults, putting more boxes in there.”

Why use a safe deposit box?

McGuinn knows first-hand that keeping items in a safe deposit box is safer than storing them in a safe at home. Once while he was traveling, someone broke into his house and used the tools in his garage to get into his safe.

“A safe deposit box with the concrete or steel walls, the big, magnificent vault door with triple combinations on it and time clock and all that — that’s a much safer choice for consumers,” McGuinn says.

[READ: How does marriage affect my credit situation?]

What should — and shouldn’t — go in a safe deposit box

Antiques, documents and anything that’s difficult or impossible to replace that isn’t needed right away could be worth putting in a safe deposit box.

Good things to put in a safe deposit box include:

Keep in mind that a bank may limit the amount of items you can keep in a safe deposit box, based on their value. There may be other restrictions as well, like rules against keeping explosives and anything illegal in the box you’re renting out.

“It basically comes down to what the bank has got in their lease agreement that you signed and agreed to,” McGuinn says.

You should read your lease agreement carefully and avoid storing items you might need on short notice or in an emergency in your safe deposit box, like passports, medical directives and revocable living wills.

How much does it cost to rent a safe deposit box?

The cost of renting a safe deposit box varies depending on its size. Usually, they’re a dollar per square inch, McGuinn says. A 3-by-5 inch box could potentially be rented for $15 a year.

In addition to the cost of renting the box, you may be expected to make a deposit that’s only refundable if you bring both keys from the bank or credit union back. Fees for this deposit could range anywhere from $10 to $25, McGuinn says. Customers who attempt to duplicate their keys are automatically in violation of the agreement they made with their bank or credit union.

Before signing an agreement, it’s best to look at the banks and credit unions near the area where you work or live and see what they charge customers for renting out safe deposit boxes. Find out the cost of a 10-by-10 inch box and a 3-by-5 inch box, McGuinn says. Even if one option is more expensive, it might be the better choice if it’s close to home.

A safe deposit box lives within the vault of a federally-insured bank or credit union. But whatever you put inside that box is not insured by the institution or the government. The Federal Deposit Insurance Corp., for example, protects only the money in FDIC-insured checking, savings, CDs and money market accounts. Furthermore, there are no federal laws stating that customers must receive any form of payment when an item is damaged or stolen.

If you want insurance on the items within the box, you have to purchase it yourself. Why might you consider this? You could lose valuables stored in a bank vault following a natural disaster.

Consider adding a special policy to your home or contents insurance policy to cover valuable items. Whether it’s your diamond tiara or a collection of rare magazines, your home insurance agent can write a separate policy, called a rider. And insurers will often give you a discount for storing pricey items in a safe deposit box.

A personal articles floater can be added to your homeowners or renters insurance policy, McGuinn says. Another option is finding a company that specializes in providing policies for safe deposit box contents.

Other ways to protect your belongings include sealing them in water-safe, zippered plastic bags and keeping those inside Tupperware or similar containers. And before entrusting a bank with anything, McGuinn recommends asking the 30 questions that appear on his safe deposit report card to see whether your items will be kept in a secure location.

The elimination of the 2 percent miscellaneous deduction under the Tax Cuts and Jobs Act of 2017 means that taxpayers can no longer deduct the cost of investment expenses, such as safety deposit box rentals, according to Caroline Bruckner, managing director of the Kogod Tax Policy Center at American University.

Bruckner says tax simplification was one of the goals of tax reform, and this was achieved by doubling the standard deduction. In order to make up for the shortfall, certain tax breaks, such as this one, had to be eliminated.

Who should have access to your safe deposit box?

You can open a box for yourself alone, with one other person or with several other people. And some institutions will accommodate as many co-lessors as you’d like.

If you select co-lessors for your box, those people will have access and rights to the contents that are equal to yours.

Some institutions will allow you to set up access so that both (or all) lessors have to be present to open it. But that’s not smart or practical.

Experts say it’s smart to have a designated power of attorney to handle your financial affairs — including access to your box — in case you are unable to because you are disabled or traveling, among other reasons.

McGuinn says that a co-tenant, on the other hand, has survivorship in most of the states that he travels to. Check with your local laws and bank to see how a co-tenant is treated upon your death.

One smart move: Keep a running inventory of your safe deposit box — and revise it every time you put something in or take something out.

And, especially if you rent a box solo, make sure that your family or heirs know where the box is, and where to find the inventory and box key.

What happens to safe deposit boxes after death?

With several names on the safe deposit box account, the box should remain available.

But the deceased person’s executor might demand access to the box, and those situations can get sticky. Before you rent a safety deposit find out what happens if one of the parties on the safe deposit box lease dies.

If institution personnel don’t know or seem unsure, ask your own attorney or contact a local estate attorney.

If you alone rent the box, the box will be sealed when you die and it could be weeks or months before it’s opened. “Which means your attorney cannot gain access to that box to manage your estate,” Edelman says.

An executor that you designated to handle your estate after you die would eventually get access to your safe deposit box, but how quickly this happens depends on the state you live in and the bank you have a relationship with.