There’s a war brewing among the nation’s top online banks. They’re battling it out behind the scenes, competing to offer savers the best interest rates.

The races were off to a slow start in the first quarter of 2018. Banks like Live Oak and IncredibleBank, the online division of a community bank based in Wisconsin, raised the yields on their savings accounts before the Federal Reserve hiked its benchmark rate on March 21.

But several others — including Discover, Synchrony and CIT banks — waited to move. They didn’t lift their savings rates until about a month after the Fed rate hike.

After that, things started heating up. In April, IncredibleBank raised its savings account rate for the third time in seven weeks. American Express National Bank gradually bumped up its rates for savers, too, making three adjustments to its rates within a couple of months.

By the time the Fed hiked short-term interest rates again in the middle of June, there were two dozen banks paying at least 1.5 percent APY. The best savings account paid more than 2 percent APY. 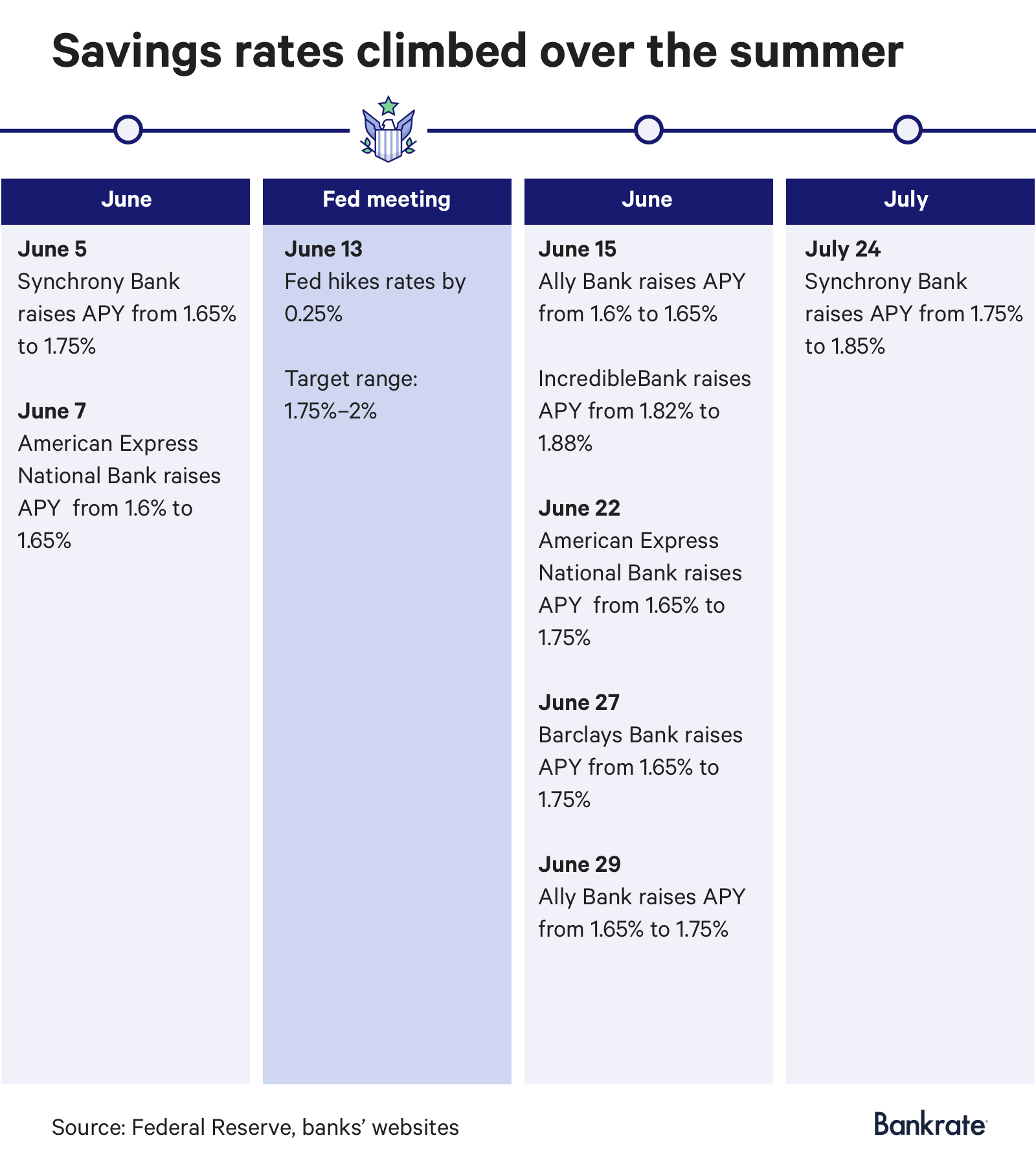 Some online banks couldn’t keep up. An online division of Emigrant Bank called DollarSavingsDirect had been steadily increasing its savings rate for nearly a year. But with time, it seemed to give up on competing for the top spot in the market. It went so far as to change its tagline from boasting that it had America’s best rate to stating that it offers “one of the top rates in America.”

Others, however, continued pushing their rates higher after the Fed rate hike in September. Ally Bank has boosted its savings yield eight times since April. It responded much more quickly to the second Fed hike than it did to the one in March. But after the September rate hike, it waited nearly a week to boost rates for savers.

The top savings rate available on Bankrate is currently 2.4 percent. More than two dozen banks and credit unions have savings yields of at least 2 percent APY. 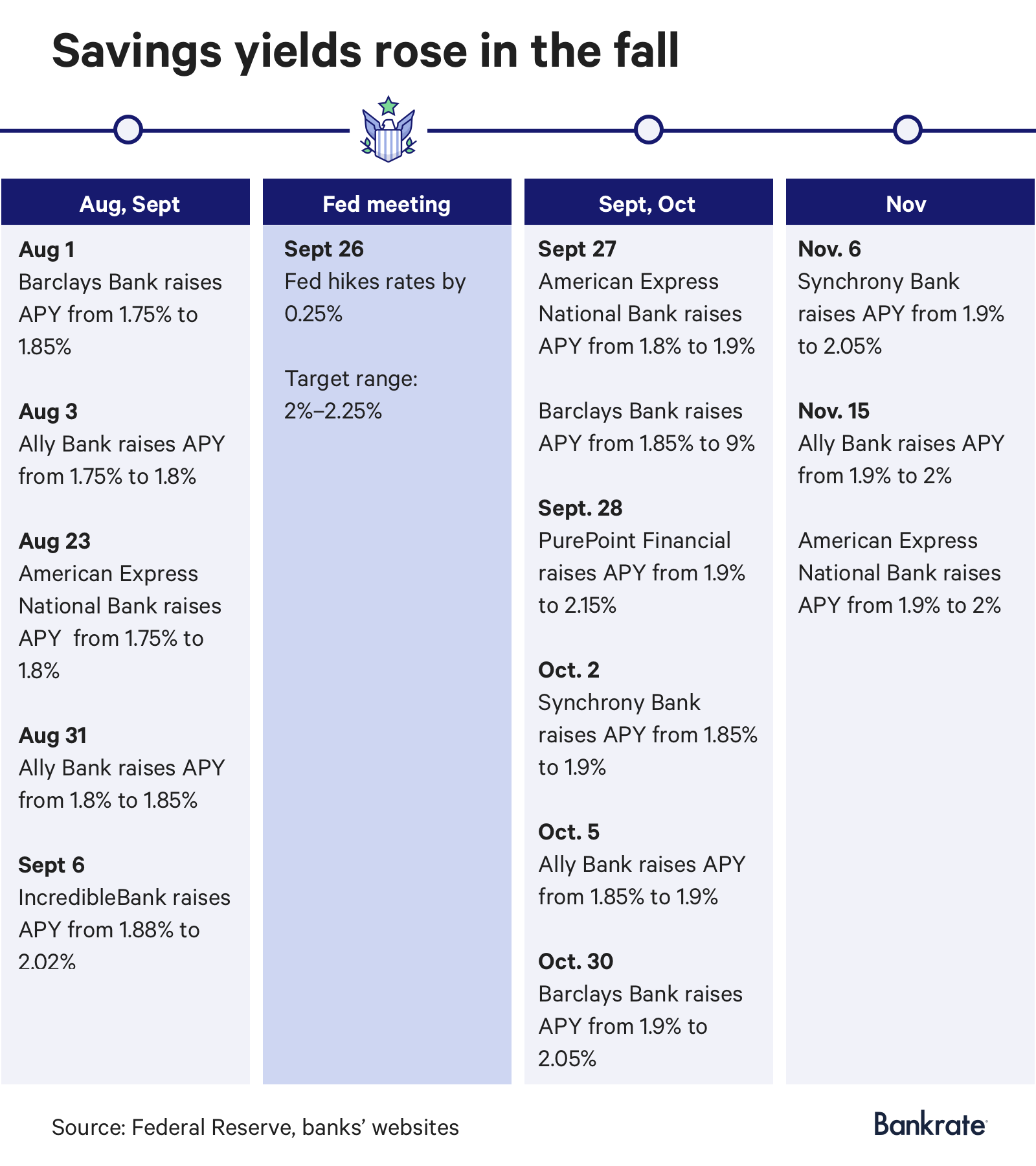 To be clear, most banks have not significantly raised deposit rates. Bankrate’s data shows that the average yield on a savings account is just 0.10 percent.

Still, the yield battle among a dozen or so online banks may leave savers in a bind. Should you pick a bank and move on or wait for a deal with a higher yield? As you plot your next move, compare rates among the top savings accounts.

With Fed hiking rates for the fourth time this year, the game of one-upmanship has no clear end in sight. Within the next several weeks, we could see a number of online institutions, like PurePoint Financial and Live Oak Bank, paying savers more interest.

“The returns paid on savings and CDs are a key point of competition among online banks and recent Fed interest rate increases have raised the bar,” says Greg McBride, CFA, Bankrate’s chief financial analyst. “There is real pressure to remain competitive if these banks want to retain the deposits they have and hope to bring in more.”

Putting your money in a high-yield savings account can help you build your emergency fund and hit short-term savings targets. But switching accounts just to grab the highest available yield could be fruitless in a rising rate environment.

“I would suggest to consumers not to go chasing the top interest rate bank right now,” says Kristin McFarland, a wealth adviser and certified financial planner professional at Darrow Wealth Management. “Banks are in competition with each other, so they’re not likely to let someone beat them by any meaningful measure for a sustained period of time.”

The case for having multiple savings accounts

Instead of closing a savings account each time you spot one with a better rate, you could have multiple accounts at different banks.

If there was another financial crisis, Vince Shorb, CEO of the National Financial Educators Council, says you’d at least have a safety net.

But not everyone can handle juggling accounts at different banks.

“Some people can manage multiple accounts without a problem. Other people have a problem even managing one account,” Shorb says. “So I think it comes down to systems, organization, making sure you have all your financial records in one place.”

Instead of holding out for better rates, consider choosing a savings account that currently meets your short-term financial needs.

“In terms of savings accounts, what I would suggest to one of our clients is to make the best decision for their personal situation based on the facts that they know today,” McFarland says.

If you come across a savings account that seems like a better bargain, run the numbers to see if opening it makes sense. The difference in interest may not be that big, and if you’re trying to build wealth, you’ll have to start investing in CDs and other products.

If you’re not saving money on a regular basis — by either automating your savings or finding ways to cut back on spending — a higher interest rate won’t help much.

“It’s wonderful that banks are now offering higher interest rates,” says Allie Vered, director of America Saves, a campaign under the Consumer Federation of America. “But at the end of the day, you know what’s most important is that you’re (saving) and that you’re committed to it because it’s good for you and it gives you security and peace of mind.”