Optimism is running high as the year 2020 kicks off, and more than 4 out of 10 Americans are expecting their finances to get better during this pivotal election year.

About 43 percent of respondents think their financial situation will get better in 2020, according to Bankrate’s latest Financial Outlook Survey. This figure includes some 28 percent who say their finances will get “somewhat better” and 15 percent who expect them to get “significantly better.”

Only 16 percent of Americans expect their finances will worsen in 2020, while 41 percent expect their situation to stay the same this year.

Americans’ optimism is only slightly below last year’s numbers, when 44 percent expected improvement. Meanwhile, pessimism climbed from 12 percent to 16 percent year over year.

“The optimism, or lack of pessimism, Americans have regarding the outlook for their finances in 2020 is consistent with an ongoing economic expansion and low unemployment,” says Greg McBride, CFA, Bankrate chief financial analyst. 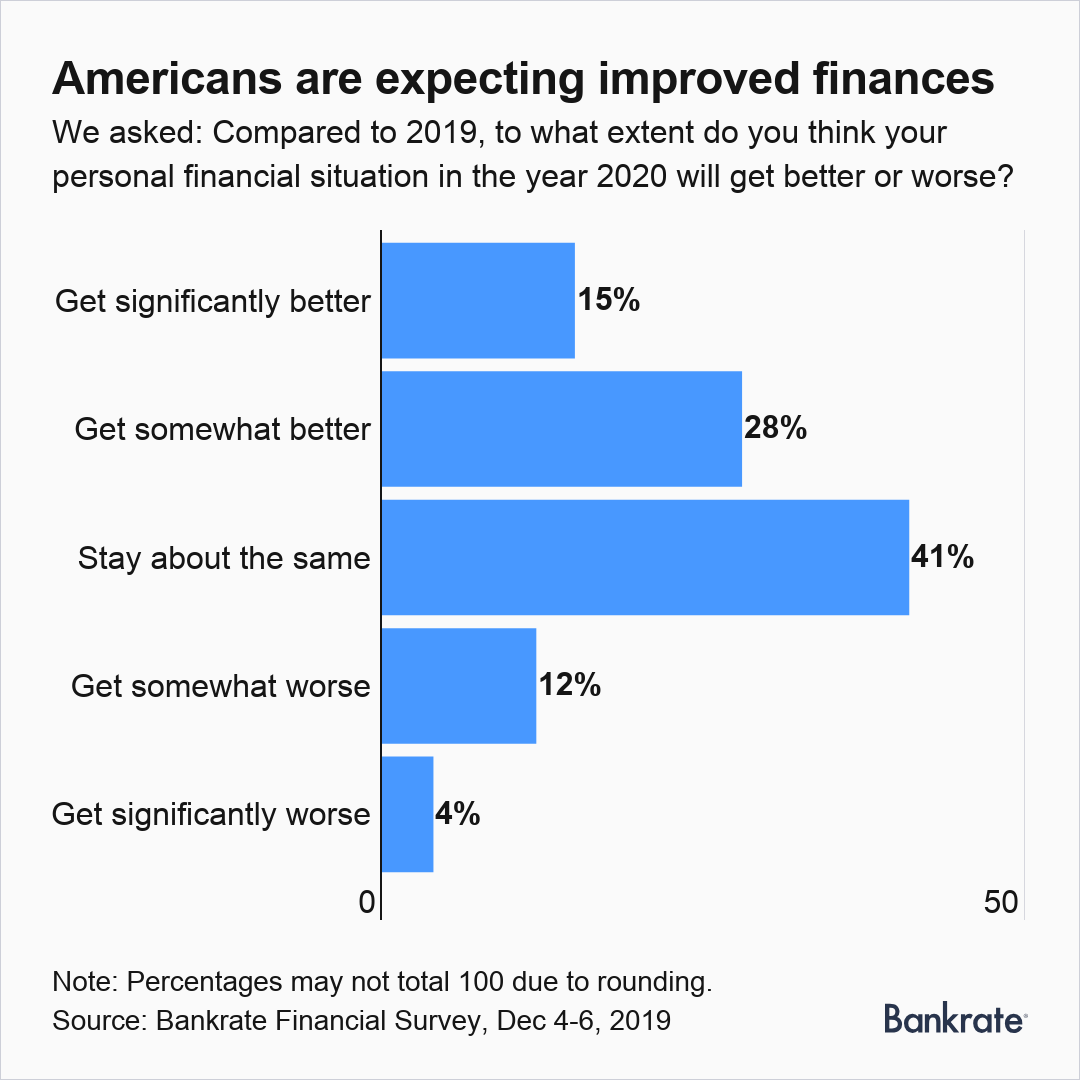 Unemployment is sitting at 3.5 percent, as of year-end 2019, near fifty-year lows, and average hourly earnings in December rose a solid 2.9 percent.

But while the economy looks good now, a few signs may show some weakening. December’s wage gains were the first below three percent since July 2018. Meanwhile, economists expect unemployment to edge up slightly in 2020, to 3.9 percent, according to a Dec. 2019 Bankrate survey.

Why Americans think their situation will change

Americans anticipate that their financial situation will improve for many different reasons.

The most commonly cited reasons for an improved financial situation include that they expect to make more money at work (49 percent) and will have less debt (42 percent).

Other responses included making more money from savings or investments (28 percent), change in life circumstances such as health or family (27 percent), the work done by political leaders in Washington (14 percent) and changing interest rates (8 percent). 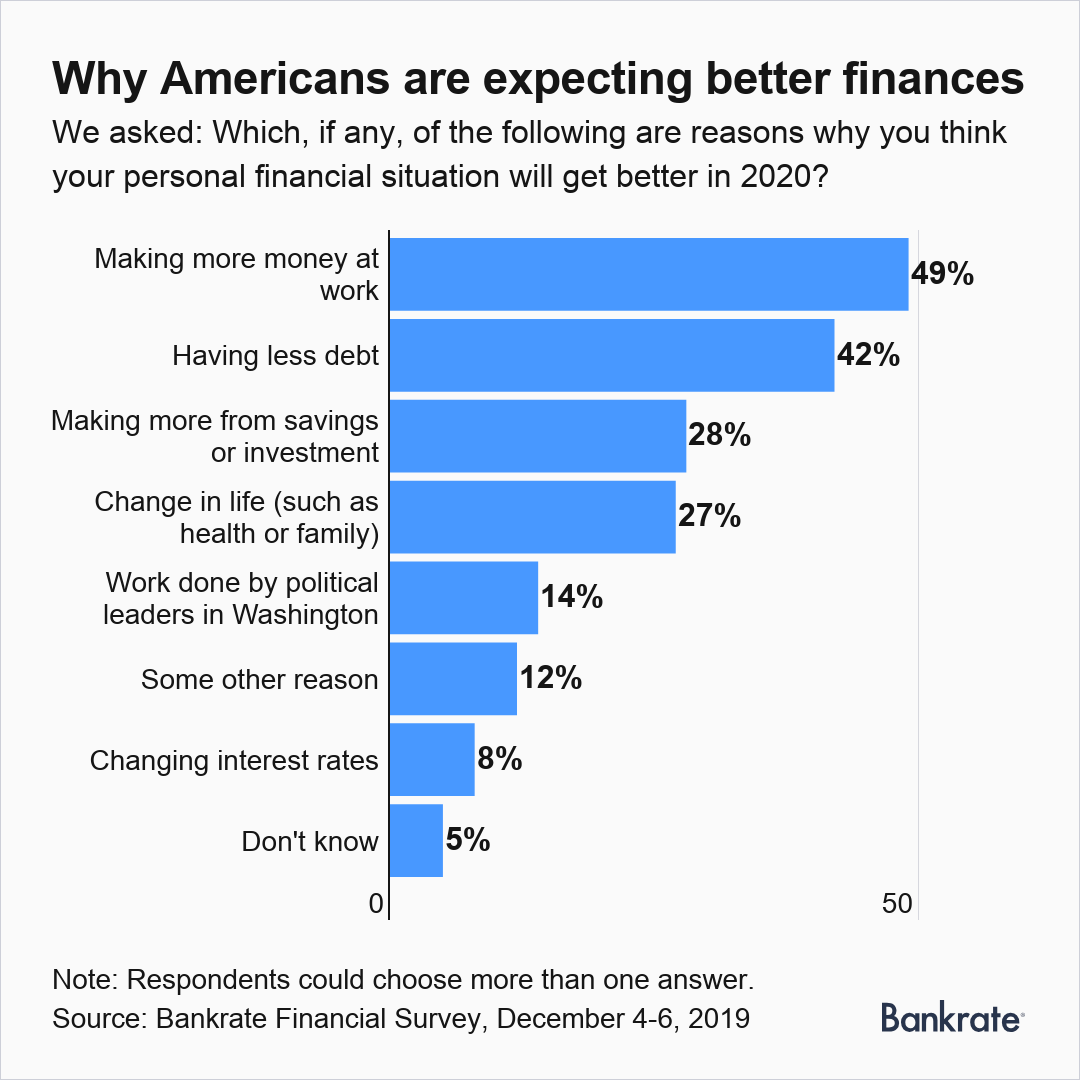 In comparison, those who expected their financial situation to worsen expressed similar causes for their concern, except they see those factors affecting them negatively.

The most commonly cited reasons for a deteriorating financial situation include the work done by political leaders in Washington (44 percent), a change in life circumstances such as health of family (33 percent) and increased debt (30 percent). 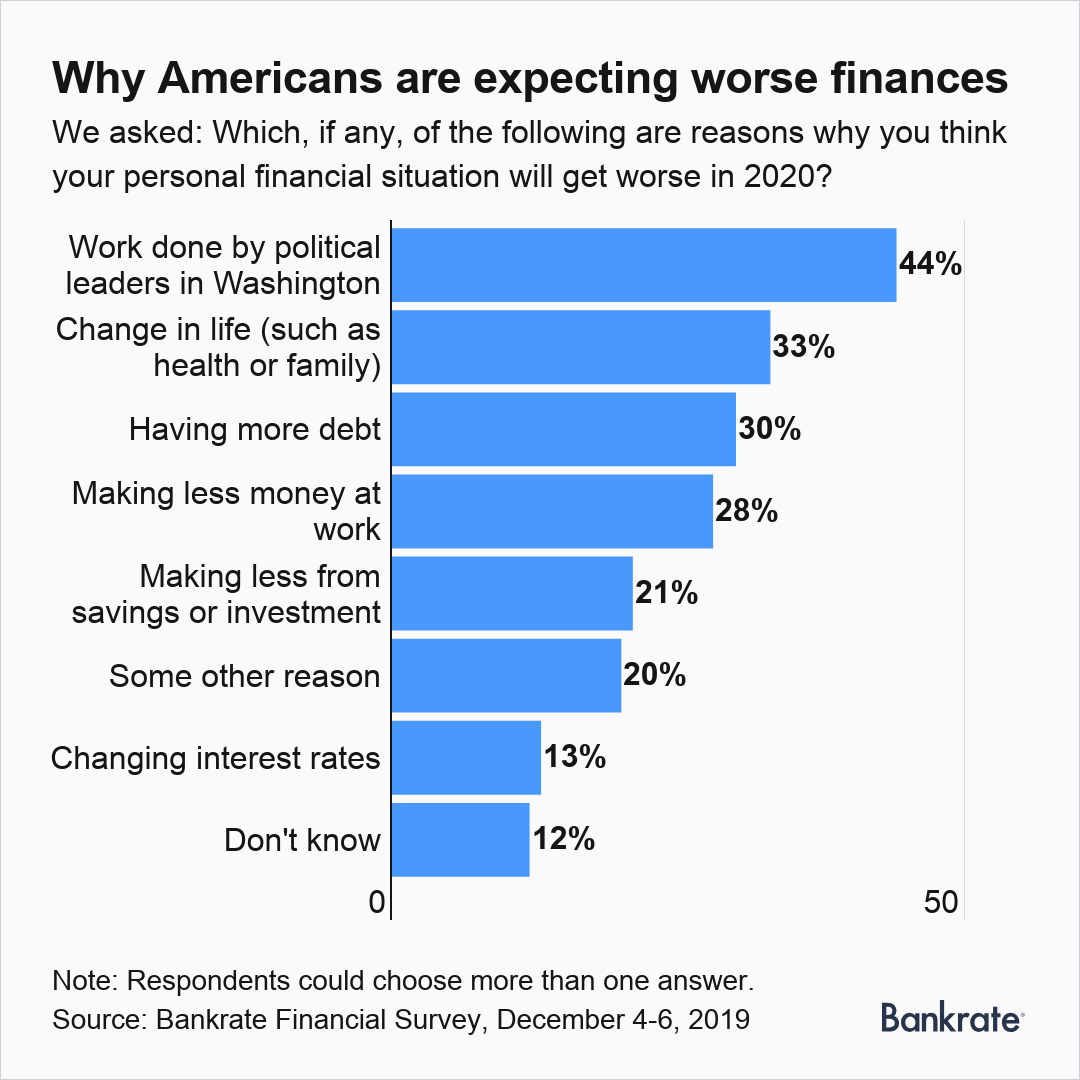 Which Americans are the most optimistic about 2020?

While Americans as a whole remain largely optimistic, some groups are more hopeful than others. Younger Americans tended to be more optimistic than older ones.

Those anticipating their financial situation to improve were skewed more toward millennials, with 56 percent reporting optimism. Generation X followed at 44 percent, followed by baby boomers at 31 percent and the Silent Generation at 28 percent.

Among these age groups, the reasons for optimism varied somewhat. Millennials (58 percent) and Generation X (51 percent) were more likely to cite making more money at work as a reason for optimism, while boomers (54 percent) were anticipating less debt.

Americans’ outlook didn’t vary that much when broken down by income, though more income correlated to somewhat higher optimism.

What are Americans’ main financial goals in 2020?

The Bankrate survey revealed that Americans have a variety of financial goals in 2020, but the goals tended to cluster around a few key categories.

When asked their one main financial goal, Americans most commonly responded that paying down debt was their goal, with 22 percent of respondents. Two other top answers included better budgeting (16 percent) and saving more for emergencies (12 percent). 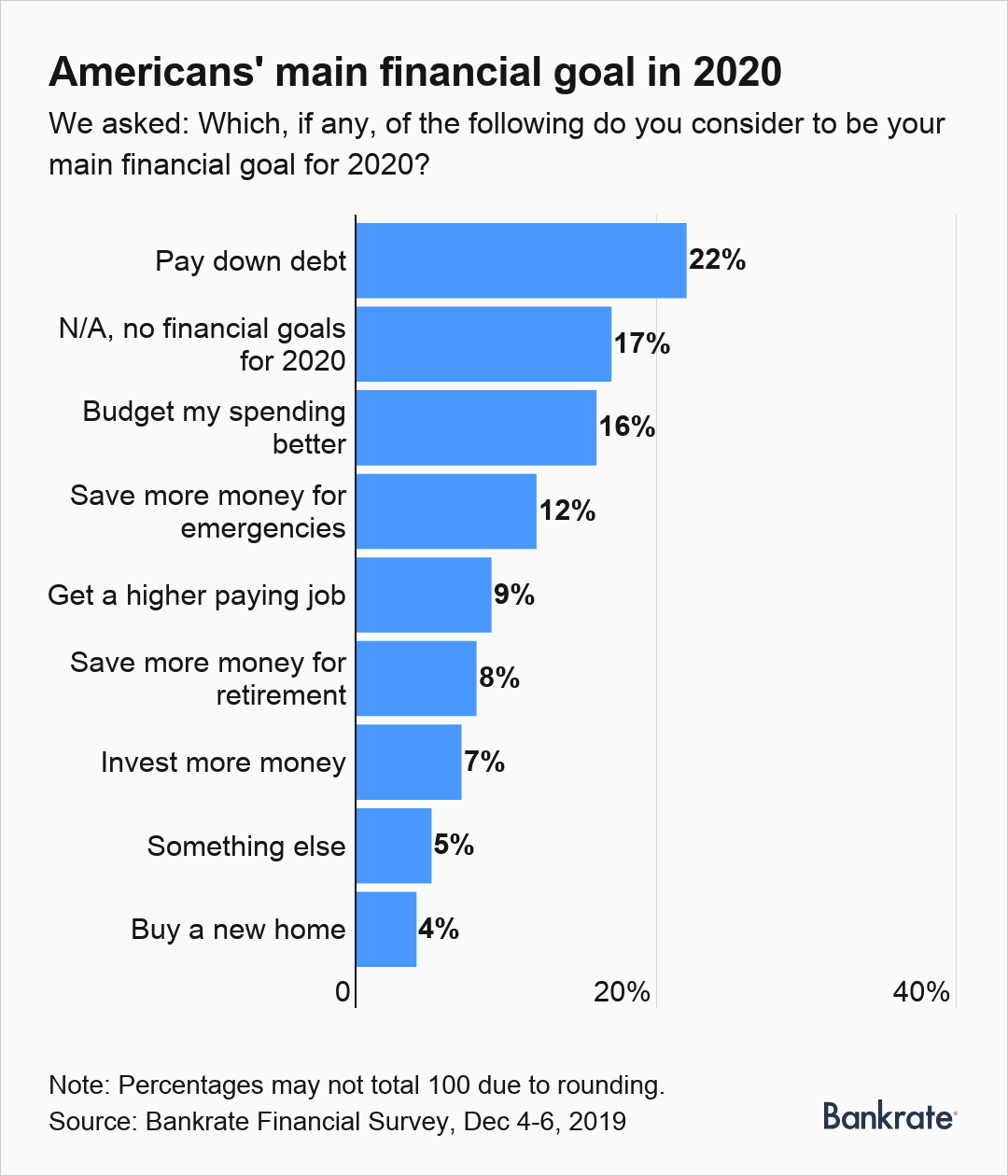 Significantly, paying down debt was the top financial goal among all age and income groups, though notably was highest for households with income of $80,000 or more.

How to improve your finances in 2020

Americans have a pretty clear idea of what they need to do to better their finances, according to the Bankrate survey.

“Improving your finances in 2020 revolves around the fundamental blocking and tackling of personal finance – budgeting, saving, and paying down debt – and Americans know it, commonly citing these as their top financial goal,” says McBride.

While the economy looks solid now, it won’t always be so, and those who are paying down debt and otherwise preparing for tougher times will find them easier to ride out when they do come.

Resolve to improve your finances today, especially while the year is new and your will is high. Whether it’s reducing your debt, getting a new job, asking for a raise or starting a budget to keep you on track – get going today.

And if you’re looking to save for retirement? A recent Bankrate survey showed that only 29 percent of American increased their retirement savings in 2019, compared with the year before. About 12 percent of respondents said they hadn’t gotten around to it.

While the economy is riding high, it’s easier to get debts paid down and money in the bank.

Many Americans’ financial priority begins with reducing debt, and that’s an excellent place to start. While it can be tempting to save money in order to invest, it’s safer to begin with paying off what you owe.

The reason is simple: the return that you make from investing is uncertain, but the savings you make from paying down a debt is certain. While the stock market’s average annual return has been about 10 percent over long periods, it can fluctuate dramatically in any one year.

In contrast, if you’re paying 10, 12, 15, 25 percent interest or more on debts (such as credit cards), that’s money that will you save – and effectively earn – for sure. So start with debt.

3. Then save and invest

After you’ve got your debts under control, then you can work toward savings. Experts recommend consumers begin with an emergency account with money needed for three to six months of living expenses. You can pack those funds in a safe high-yield savings account, and get one of the best rates in the country in an online account.

From there you can work your way up to investing in the stock market, either in a taxable account or via a traditional or Roth IRA. And then you can let the power compounding grow your money over time.

This study was conducted for Bankrate via online interview by YouGov. Interviews were conducted from December 4-6, 2019 among a sample of 2,634 adults. Data are weighted and are intended to be representative of all U.S. adults, and therefore are subject to statistical errors typically associated with sample-based information. 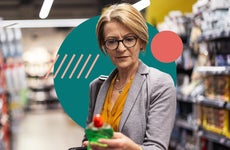 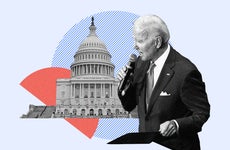 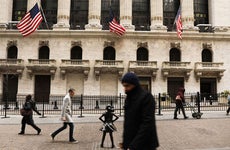 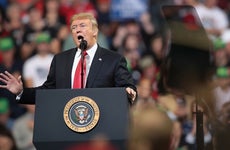