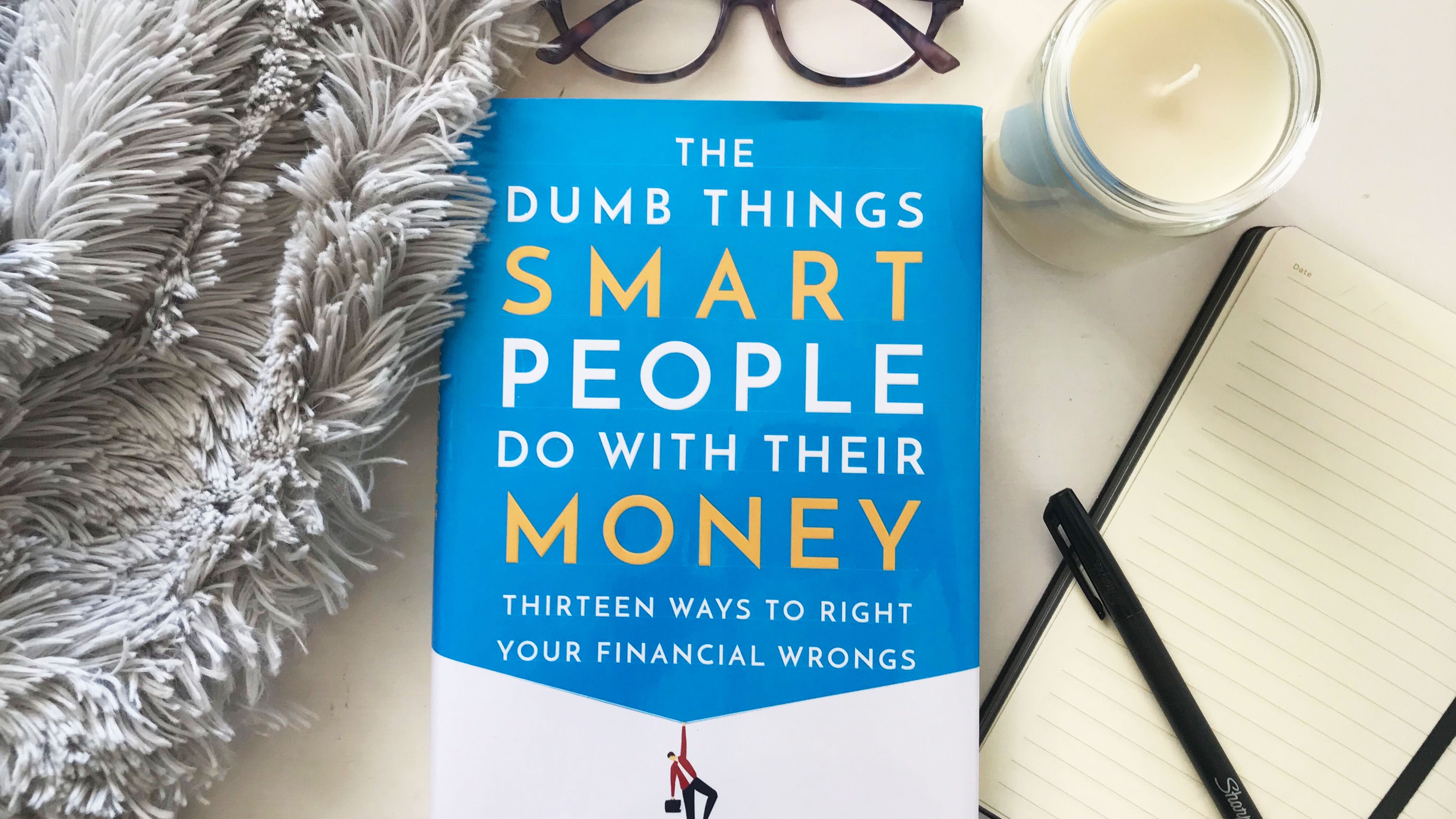 Danny worked hard in a stressful environment for years to finally achieve his retirement dream.

The retired professor paid $300,000 cash for a house right on the beach in the Florida Keys.

But Hurricane Irma and a lack of planning washed away Danny’s perfect retirement because he didn’t have flood insurance. A homeowner’s insurance policy alone wouldn’t protect his beachfront home in this instance. This smart person’s plan had a major hole in it. And it cost him his beach lifestyle, forcing him to teach part time.

Financial planning and buying the right insurance are a few of the key takeaways from Jill Schlesinger’s book,  “The Dumb Things Smart People Do With Their Money: Thirteen Ways To Right Your Financial Wrongs.” Also, not trying to time the market and diversifying your portfolio are other areas Schlesinger covers in the book.

Schlesinger is a certified financial planner, syndicated columnist and appears on CBS radio and television. She reminds readers about issues that can dramatically change lives and does this by injecting her personality and experience into the anecdotes.

[This is the Bankrate Book Club’s first book. The book club reads a personal finance book together every month and discusses it in the Money Masters group on Facebook. You can also follow along on Instagram for more announcements and group discussion.]

Really smart people can make big financial mistakes. Schlesinger brings attention to these errors that her clients and listeners have actually made (although the names are changed for privacy reasons, the stories are real). This style does a good job in keeping the reader engaged. A book just about common mistakes, without these examples, wouldn’t make quite the impact that these real-life stories do.

The 13 chapters/topics in the book cover a wide range of financial issues. Many of those that read this book should find something they can change to help improve their financial future.

It could be as simple as learning that emailing wire transfer instructions isn’t the best practice. (One of Schlesinger’s clients did this. The person he billed followed the instructions and the money went to a different account because someone intercepted the original email and sent one with different wiring information.)

Or it could be getting the courage to talk to your aging parents about their future care. As Schlesinger points out, realistic conversations with your children about the most cost-effective college options is also a must-have talk.

This is a 200-plus page book. But it feels like a conversation with a friend. Schlesinger’s entertaining voice and her financial knowledge helps keep the flow of the book from getting mundane. She also has a knack for explaining subjects in an easy-to-understand way.

Schlesinger emphasizes the importance of picking an affordable college and not having your child graduate with a lot of debt. She brings up an interesting point that many smart and successful parents already have a great network.

So going to a school just to access an elite network might not be a cost-effective move. (Unless it is at one of the absolute top schools.) In the book, she gives an example of someone who graduated with an MBA from a college Schlesinger describes as “middle-of-the-pack at best.” The MBA graduate ended up getting a job through his network of family and friends because he struggled getting interviews on his own. So it really didn’t matter what school he graduated from in this instance.

Since student loan debt holds many back from achieving their financial goals, it’s important to invest time into making the smartest college decision possible. This book reminds us of this and the consequences of a parent sacrificing retirement savings in order to pay a child’s tuition.

She illustrates this by using the common airline announcement to secure your oxygen mask before helping others in an emergency. In this case, you need to have your retirement solidified before trying to help your children pay for college. Or this may lead to a domino effect of other financial problems.

The payoff for reading this book

Unless you’re already a financial expert, you’re probably going to learn quite a bit from this book. Even those who are financial professionals with expertise in the space will receive helpful reminders about topics that may have been put off or forgotten about — including life insurance, disability insurance, taking care of elderly parents, trusts and wills.

The items that Schlesinger addresses are vital. In the book, she gives an example of a client named Randy who left a job that had full benefits — including disability insurance — to start his own business. A few years later, not having this insurance cost him dearly.

“Then in 2006, the unthinkable happened,” Schlesinger writes in the book. “No, Randy didn’t have a heart attack. He was right — his ticker was perfectly fine.”

He could have paid $8,000 a year in disability insurance premiums for coverage if he listened to Schlesinger. But instead without this income protection, she calculates this became a $476,000 mistake.

“I could understand Randy’s perspective. I was asking him to pay a big bill for something we both hoped he’d never need,” Schlesinger writes.

Schlesinger also raised awareness about the risks of having too many eggs in one basket — especially when that basket is filled with too much of an employer’s stock.

She had a colleague who had around half of their $1.5 million retirement account invested in CBS stock. When the stock was at $70, he promised Schlesinger he’d diversify his portfolio. At $55 per share, he didn’t want to lock in a loss. But Schlesinger reminded him that he bought the stock when it was trading at only $6.

“When I point out to people that they’re timing the market, they often acknowledge that it’s a bozo move, but they present all sorts of excuses as to why in their situation doing so makes sense,” Schlesinger writes in the book.

This advice can be used when investing, buying (or selling) a home or opening up a savings account. A year ago if you were holding out for higher CD rates in 2019, you would have been wrong. Trying to perfectly time things rarely works.

For me, the important reminders in this book — especially when it comes to preparing for death, the death of others and unforeseen circumstances — are why this is must-read content.

As someone who suggests people get a credit freeze from all three credit bureaus, it was helpful to learn there’s a fourth company that you might want to contact too.

Innovis offers a security freeze and you can get a free consumer report every 12 months, according to the Consumer Financial Protection Bureau (CFPB). Innovis provides data for fraud detection and prevention.

I hope the “buying a house when you should rent” advice is read carefully. Obviously, the opera singer who just moved to New York probably would be better off renting, especially at first.

But home ownership can be a great decision for many to build equity in an asset. Of course, making money on real estate is never a sure thing. So, I’m glad Schlesinger makes people think about this decision.

Schlesinger does make a good point in that you shouldn’t feel like you have to buy and that renting can be a wise choice in certain instances.

I think there’s some very smart people who spend without totally thinking about where every dollar goes. While I think Schlesinger picked 13 great topics, I would have really liked to see a section focused on her budgeting tips.

Like her other advice, I think this could have been a useful reminder to readers to audit their expenses to allow them to save more for the future. She probably has some great advice on this topic, and it would have been a great addition to this book — even though I understand it wasn’t meant to be about managing your day-to-day finances.

But living life without budgeting can turn into a very dumb mistake if you don’t maximize your savings.

Overall, there was a good deal of helpful information in this book. But the friendly reminders of the things you put off (mainly things having to do with financial decisions around death) are why this book is a must read for those who don’t have all of their planning 100 percent solidified. If someone depends on you (spouse, child, etc.) or if your parents are still alive, this book does a great job of reminding you about things we don’t like to think about. Or things we’ve conveniently purged from our to-do list. But really, these need to be a priority.

About the book and author

Published by Ballantine Books, “The Dumb Things Smart People Do with Their Money: Thirteen Ways To Right Your Financial Wrongs” retails for $25.

Schlesinger appears on CBS radio and television stations nationwide. She covers investing, the economy, markets and other financial topics. She’s also a weekly guest on NPR’s “Here and Now” and has a podcast called “Jill on Money with Jill Schlesinger.”

Previously, she was editor-at-large for CBS MoneyWatch.com and she spent 14 years as the co-owner and chief investment officer for an independent investment advisory firm.

— Note: Ratings are based on the opinion of the reviewer.