Clinton: Go to college, let US pay for it 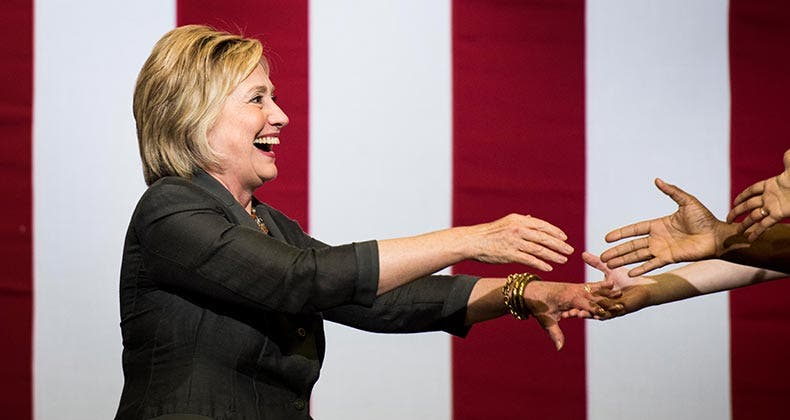 Hillary Clinton wants you to go to college and she’ll pay for it — or at least part of it.
Not personally. Not even Clinton has that much money. The presumptive Democratic presidential nominee put out a campaign platform earlier this month, outlining how the government would pick up the tab for college tuition.

By 2021, families with income up to $125,000 will pay no tuition at in-state 4-year public colleges and universities. And from the beginning, every student from a family making $85,000 a year or less will be able to go to an in-state 4-year public college or university without paying tuition.
The plan would cover more than 80% of families, according to the Clinton campaign.

Elisia Howard, a college consultant in Seattle, says the program would cost $350 billion over 10 years.

RATE SEARCH: Are you looking for a student loan? Check out the student loan rates today at Bankrate.com.

Some flaws with the plan

In addition to the huge cost, Clinton’s proposal has some holes. It would be hard to get stingy Republicans to approve it, says Mark Kantrowitz, publisher and VP of strategy for Cappex.com, a financial aid website.

In addition, it doesn’t account for the differences in appropriations and tuition costs among the states, where generally tuition has been rising, although it encourages states to “invest in higher education” and holds colleges and universities to control tuition costs.

It doesn’t include the cost of books and room and board, which can be significant, Kantrowitz says.

“They seem to be characterizing it as an add-on, on top of existing federal student aid, so the federal Pell Grant may be used to pay for textbooks and room and board,” Kantrowitz says. “I would not be surprised, however, if some of the states redirect state grant programs into paying for their share of the costs.”

A Pell Grant is financial aid that the U.S. federal government provides to students in financial need to pay for college.

RATE SEARCH: Do you need a student loan to go college? Check out the college loan rates today at Bankrate.com.

Still, there is a need for a program like Clinton’s. “State investment in higher education has been declining on a per-student, inflation-adjusted basis for decades. It is the primary driver of increases in public college tuition,” he says.

Read: 7 do’s and don’ts of student loans for millennials.

Revising her New College Compact, Clinton floated an educational plan that had been offered earlier by former Democratic opponent Bernie Sanders.
As part of her plan, Clinton also would:

“It is outrageous that young people are being asked to pay interest rates that are so much higher than interest rates to buy a house or buy a car or any other product,” Clinton says. “You’re going to be able to lower your interest rate.”

Whether Clinton will make inroads with voters who are considering student loans or who have them already is uncertain, but the topic is on the minds of students.

“We now know that education loan debt is an ongoing worry for an overwhelming proportion of students,” says Alex Neal, CEO of CampusBooks.com.