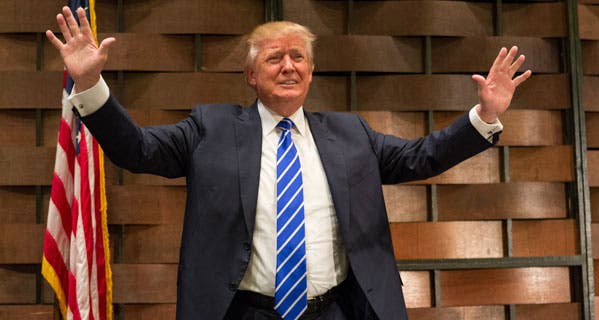 Donald Trump says his new tax plan will cost him a fortune. Why don’t I believe that?

The Donald today released his proposal to overhaul the tax code. He has some interesting ideas.

Most of them, though, have been proposed, and a few were even implemented before with little success.

At tax filing time, according to Trump, taxpayers under these filing thresholds would “get a new 1-page form to send the IRS saying, ‘I win.'”

“With this huge reduction in rates, many of the current exemptions and deductions will become unnecessary or redundant,” says Trump.

This looks to be very similar to the existing itemized deduction phaseouts already in place.

And even The Donald trembles a bit when it comes to cherished tax breaks. Charitable giving and mortgage interest deductions remain unchanged for all taxpayers in the Trump tax plan.

Businesses and wealthy benefit, too

Trump is proposing lowering the corporate tax rate from 35% to 15%. This would make international companies more competitive globally, he says.

But Trump wants to make sure that the lower rate doesn’t just apply to larger companies. Under the current tax code, income earned by freelancers, sole proprietors, unincorporated small businesses and pass-through entities are taxed at their personal income tax rates, which could be as high as 39.6%.

Under the Trump plan, a new business income tax rate within the personal income tax code will match the 15% corporate tax rate.

Plus, there is no estate tax in Trump’s tax world. I’m sure his kids are thrilled about that provision.

Losing loopholes to pay for a simple tax plan

To offset all these cuts, Trump is relying on the elimination of most tax deductions and loopholes.

As noted earlier, many individual tax breaks are phased out as people earn more. And since under the current tax system, it’s mostly richer filers who itemize and use many of these tax breaks, they would indeed pay more of a tax price.

But leaving the mortgage interest deduction alone, while a smart political move, keeps one of the more costly individual tax breaks in place.

True to his slam on hedge fund managers whose earnings, characterized as carried interest, are taxed at lower capital gains tax rates, Trump does propose that some of them pay more taxes. But not all of them.

Trump’s plan targets carried interest for “speculative partnerships that do not grow businesses or create jobs and are not risking their own capital.” Other such arrangements would still enjoy the lower tax rates.

So hedge funds that are deemed good will still get favorable tax treatment. Got it. I can’t wait to read the regulations in this area.

Basically, though, much of the Trump plan relies on a reworking of trickle-down economics.

The success of the plan is based on economic growth that the Republican presidential nominee front-runner says will average between 3% and 6% a year. That, he contends, will help everyone.

“I actually believe they’ll do better, because the economy will grow,” Trump said, with “they” being middle-class taxpayers. “It’ll grow rapidly, and we’ll have something very special. If we have more than 3(%), these numbers are really spectacular.”

The devil, as they say, is in the details. And right now the details look very similar to ideas that have been floated in past and even this year’s presidential campaigns.

In fact, some analysts have noted that Trump’s proposal offers even more cuts for the rich than does the plan offered earlier this year by former Florida Gov. Jeb Bush, the establishment candidate that Trump loves to trash talk.

The reality is that Trump, ever the showman and salesman, is taking old ideas that haven’t worked and dressing them up as a shiny, new, “amazing” tax code. What’s really amazing is that he keeps getting away with such stunts.