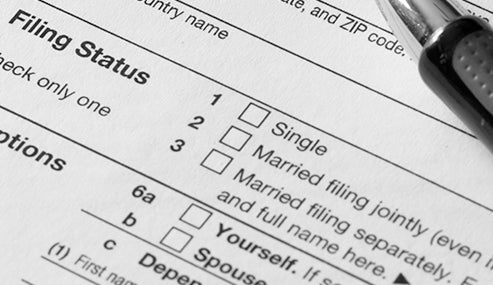 There are seven tax brackets for most ordinary income: 10 percent, 12 percent, 22 percent, 24 percent, 32 percent, 35 percent and 37 percent. The U.S. has a progressive tax system, which means that as you move up the pay scale, you also move up the tax scale.

Your tax bracket depends on your taxable income and your filing status: single, married filing jointly or qualifying widow(er), married filing separately, and head of household. The deadline to file taxes each year is April 15, unless that date falls on a weekend or holiday or you get an extension, such as the one the government granted in 2020 because of the Covid-19 pandemic.

How do federal tax brackets work?

Tax brackets are not as intuitive as they seem because most taxpayers have to look at more than one bracket to know their tax rate.

How to get into a lower tax bracket

There are basically two ways to get into a lower tax bracket: tax credits and tax deductions.

While tax credits reduce your actual tax bill, tax deductions reduce the amount of your income that is taxable. If you have enough deductions to exceed the standard deduction for your filing status, you can itemize those expenses to lower your taxable income. For example, if your medical expenses exceed 10 percent of your adjusted gross income in 2021, you can claim those and lower your taxable income.

The tax code has seven income/tax brackets, with the lowest tax rate being 10 percent. The highest earners pay 37 percent.

The Tax Cuts and Jobs Act overhauled the tax code, resulting in some changes that save taxpayers money, others that raise their taxes. One big change, especially for people in high-tax states, is the $10,000 cap on the amount of state and local property tax, income tax and sales tax that can be deducted. Those taxes were almost fully deductible before.

The law also hits people with high mortgage debt a little harder. The amount of mortgage debt on which the interest is tax-deductible has been reduced from $1 million to $750,000.