With the explosive rise and fall of Bitcoin and other cryptocurrency prices over the last year, you may be sitting on some sizable capital gains or losses. You’ll need to report those to the IRS when you file your taxes each year, and Form 8949 is the place to start.

You’ll have to pay capital gains taxes on any profits, though you can receive a deduction for any losses that you’ve realized, reducing the taxes that you owe. Though you may think that crypto trades are untraceable, some firms are reporting your trades to the IRS on Form 1099. Fail to report your gains, and the IRS will come knocking on your door asking for its cut of the action.

“Cryptocurrency is an area that the IRS is continuing to focus on for enforcement,” says Brian R. Harris, tax attorney at Fogarty Mueller Harris PLLC in Tampa, Florida. He emphasizes that even if you don’t receive a 1099 or another statement from your exchange, you still must report the income.

Here’s what to know about declaring your gains and losses and how to use Form 8949.

If either of these cases apply to you, you have a taxable capital gain and you legally need to declare it.

However, if you’ve realized a gain in a tax-advantaged account such as an IRA, you needn’t report your transactions. That’s not a taxable gain. Crypto is not widely available in IRAs, though.

Finally, if you’ve suffered a loss while trading crypto, it’s worthwhile to declare that as well, since you’ll be able to take a deduction and reduce your tax bill. That might be cold comfort for losing money, but you’ll get a tax break for doing so.

How to report your gains on cryptocurrency

Before filling out Form 8949, you’ll need to declare that you have transacted in cryptocurrency near the top of the Form 1040. The IRS requires all filers to state whether they’ve received or transacted in digital currency in the relevant tax year.

When reporting your realized gains or losses on cryptocurrency, use Form 8949 to work through how your trades are treated for tax purposes. Then you’ll enter this information on Schedule D, which totals up your net capital gains and losses.

On Form 8949 you’ll report when you purchased the cryptocurrency and when you sold it, and the prices at which you did each. The purchase and sales dates are important, because the length of time you owned your cryptocurrency determines how much you’re taxed on it.

If you owned your cryptocurrency for less than a year, any gain will be taxed at short-term capital gains rates, which are the same rate as your ordinary income rates. These rates go as high as 37 percent, so they may be higher than you’d have to pay if you qualified for the long-term rates. Short-term sales are reported in Part 1 of the form, such as the one below.

If you held the property for more than a year, however, it’s considered a long-term investment, and it’s eligible for a more favorable treatment. Long-term capital gains tax rates are zero percent, 15 percent or 20 percent, depending on your income level.

Sales of long-term investments are reported on Part 2 of the form, which looks nearly the same as Part 1 above.

It’s also worth noting that if you generate income from cryptocurrency staking, you’re also obligated to declare that. But that income will be reported elsewhere on your tax return.

Provide the details of your crypto gain/loss on Form 8949

After you determine whether your gain or loss is short-term or long-term, you’ll need to enter the details of the transaction in the appropriate section of Form 8949. Every transaction requires the same pieces of information, entered in either Part 1 (for short-term transactions) or Part 2 (for long-term trades), in the relevant column.

For most transactions, you’ll fill out:

(a) The name or description of the asset you sold

(b) When you acquired it

(c) When you sold it

(d) What price you sold it for

(e) The asset’s cost or other basis

(h) The gain or loss

Once you’ve detailed all your transactions on Form 8949, total your entries and then transfer the information to the corresponding sections of Schedule D. On Schedule D, you’ll subtract your cost basis from the total proceeds to arrive at your total capital gain or loss. From there, Schedule D will determine how much tax you owe or what kind of deduction you receive.

What if you don’t receive a 1099 from your crypto exchange?

All brokers and some crypto exchanges provide detailed information on your trades each year on a Form 1099. The tax form typically provides all the information you need to fill out Form 8949. However, many crypto exchanges don’t provide a 1099, leaving you with work to do.

“Most crypto exchanges don’t do 1099 reporting, and they’re not yet required to,” Harris says. He notes, however, that laws are already in place that require crypto exchanges to report trades in tax year 2023 for filing in 2024. Until then, it’s up to traders to figure their tax liability.

Without that reporting, it’s quite a bit more difficult for traders to figure their potential gains and losses.

“It’s going to be up to you to establish your holding period, your cost basis and your proceeds,” Harris says.

That means digging through the records of your transactions, noting the purchase and sale dates, proceeds and anything else required on Form 8949. That’s no one’s idea of a fun Saturday afternoon, but it can become even more complex due to what’s called ordering rules.

Ordering rules govern which tax lots are sold when, meaning they determine whether a given sale is a short- or long-term investment.

For example, imagine you purchased 100 bitcoins in January, 100 in February and then another 100 in December. Then in March of the following year you sold just 250 of them for a profit. You’ll have both a short-term gain (for assets held for less than a year) and a long-term gain (for coins held more than a year). But how do you split the tax between short- and long-term?

Harris says that unless you can identify a specific individual bitcoin unit, then you must use what’s called “first in, first out” accounting. That means you’ll account for the oldest purchases first, up until you’ve accounted for all the coins that were sold.

Continuing the example from above, you’ll record a long-term gain on the first 100 coins bought in January and the second 100 coins from February. The next 50 coins would be counted as a short-term gain since they were held only from December to March of the following year.

You’ll need to divide the transactions this way and report them according to their holding period on Form 8949.

How do you report gains on cryptocurrency you’ve spent?

As mentioned above, trading cryptocurrency is not the only way you can rack up a taxable gain. According to IRS rules, you can also spend your way to a cryptocurrency profit, a fact that makes cryptocurrency cumbersome to use as actual currency.

“If you spend cryptocurrency, it’s a sale or exchange of cryptocurrency and it could be a taxable event,” Harris says. “For example, if you’re exchanging crypto for a pizza, then you’ll have a gain or loss compared to the fair market value of that pizza.”

You’ll have to figure out what the fair value of your purchase is (in dollars) and then compare that to your cost basis (what you paid for the cryptocurrency). Then to determine your holding period, you’ll need to identify when you bought the crypto and the date you spent it.

Total up the gains and losses from these kinds of purchases and enter them in Form 8949 just as if you were otherwise trading cryptocurrency.

Form 8949 helps you report realized capital gains and losses, ensuring that your taxable gains are recorded correctly and that you’re not taxed more than you should be. It also ensures that if you’ve realized a loss, then you’re able to claim any taxable benefit that you’re entitled to.

Finally, while you may not receive a statement of your taxable income from an exchange, that doesn’t alleviate you from the responsibility of reporting and paying your tax liability. 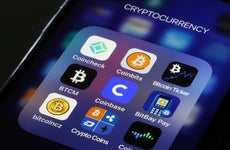 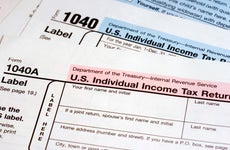 Schedule D: How to report your capital gains (or losses) to the IRS

Declaring an investment loss on land