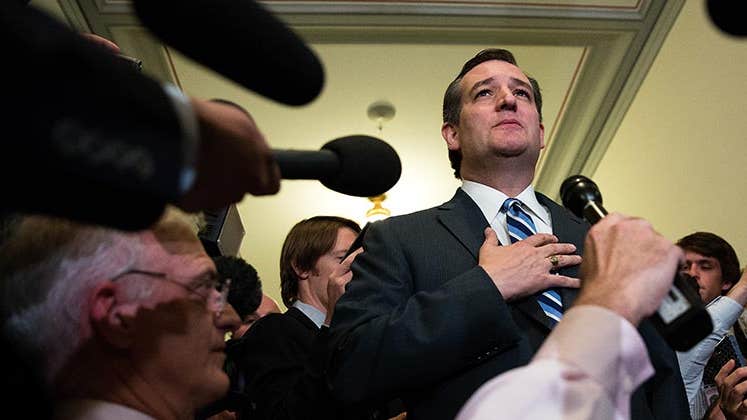 A Cruz tax stance gets a nod early in the document. The GOP’s official statement of principles on page 2 acknowledges a growing sector of the party that supports consumption taxes. But it calls for any value added tax, or VAT, to be offset by repeal of the 16th Amendment, which established the federal income tax.

A VAT is a consumption tax that is added to goods at every step in the production process. Basically, it bumps up the price of products as they are manufactured and because of that it often is referred to as a hidden national sales tax.

VATs are the favored method of taxation across much of the world. It’s widely used in Europe, as well as by Canada.

During the 2016 Republican primaries, Cruz’s tax plan called for, in part, a 16% business flat tax, which most tax policy experts agree was a version of a VAT or business transfer tax.

In addition to a VAT, Cruz also argues for a simplified, 10% flat-rate individual income tax. His tax plan, Cruz says at his campaign website, would be so easy that we would just need his flat tax postcard to file our annual returns.

In fact, Cruz says, the simplification would mean abolishing the IRS as we know it.

Such Cruz suggestions get implicit kudos in the 2016 Republican Party platform.

In the platform section titled simply “Internal Revenue Service,” the document hails GOP support for “making the federal tax code so simple and easy to understand that the IRS becomes obsolete and can be abolished.”

In that same IRS section, Cruz gets one more shout-out.

On his website, Cruz argues for abolishing the IRS because of what he described as “institutional corruption and political self-dealing that abuses taxpayers.”

Specifically, the junior senator from Texas accuses the tax agency of being used as a political weapon. He refers to the Tea Party targeting scandal, in which the IRS, while reviewing applications for 501(c)(4) tax-exempt status, was found to have given improper scrutiny to groups that, in Cruz’s words, held certain “religious beliefs, or conservative values.”

Since the IRS-Tea Party scandal broke in May 2013, Cruz and his Republican colleagues on Capitol Hill have been fighting IRS efforts to consider political activities of groups in determining whether they get tax-exempt status.

“We value the right of America’s religious leaders to preach, and Americans to speak freely, according to their faith. Republicans believe the federal government, specifically the IRS, is constitutionally prohibited from policing or censoring the speech based on religious convictions or beliefs, and therefore we urge the repeal of the Johnson Amendment.”

The Johnson Amendment to which the platform refers is Internal Revenue Code section 501(c)(3), the designation given to public charities that can accept tax-deductible donations. It gets it nickname because it was sponsored by Sen. and future President Lyndon B. Johnson in 1954.


The code section prohibits tax-exempt organizations, such as churches, from endorsing political candidates. If they violate it, they are supposed to lose their 501(c)(3) tax-exempt status.


So while Cruz, who got a consolation speaking role at this week’s Republican National Convention, still has to be smarting over losing the presidential nomination to Trump, he has to be thrilled about how many of his tax ideas made it into the Party’s platform.

You can keep up with tax and related political news, as well as find filing tips, calculators and more at Bankrate’s Tax Center.