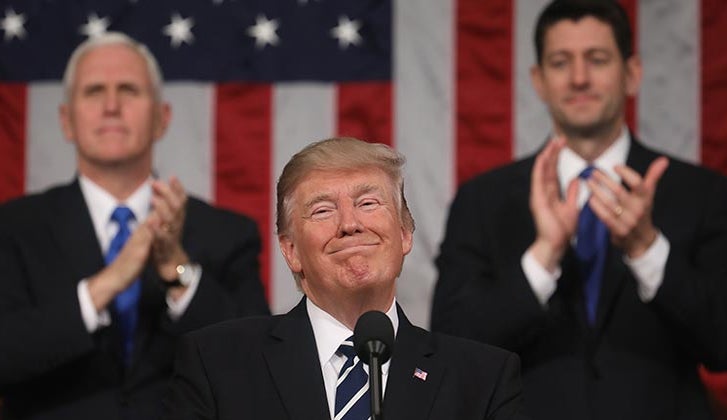 The odds of a Federal Reserve rate increase this month almost doubled overnight, but it wasn’t because of a big speech Tuesday night.

Hours before President Donald Trump gave his joint session of Congress address Tuesday, William Dudley, president of the Federal Reserve Bank of New York, hinted that a Fed rate hike could be coming sooner rather than later.

There’s now a 68.4 percent probability the Fed will increase the federal funds rate at its policy meeting on March 14 and 15. Just a day earlier, the probability had been 35.4 percent. That’s according to the CME Group’s FedWatch Tool, which calculates the odds by analyzing the prices of futures contracts.

“After the election, we’ve seen very large increases in household and business confidence, we’ve seen very buoyant financial markets — the stock market is up, credit spreads are narrow,” he said. “And we have the expectation that fiscal policy will probably move in a more stimulative direction.”

Dudley didn’t predict whether the central bank will hike rates this month or in May. When CNN’s Richard Quest asked whether he was implying that a rate increase would come sooner rather than later, Dudley replied, “I think that’s fair.”

Would would a Fed rate hike mean for you? Interest rates on common financial products will climb.

Rates that will rise soon

Interest rates on credit cards, auto loans and home equity lines of credit will rise shortly after the Fed raises the federal funds rate. Here’s what you should do now.

1. Before the Fed increases its rates, pay down the balances on your credit cards and home equity lines of credit.

Another option? Move your credit card debt to a low-interest balance transfer card.

Interest rates on home equity lines of credit are variable. Even if you rush to open a HELOC now, the interest rate will increase after the Fed takes action.

You also have the option of getting a fixed-rate home equity loan, although fewer lenders are offering them. Interest rates on those are likely to rise soon. See the differences between home equity loans and lines of credit.

2. If you’re about to buy a car with an auto loan, get the deal done before March 15.

Interest rates on auto loans are affected by the Fed’s rate moves, too.

Rates that could rise later

1. Wait a while before getting a certificate of deposit.

If you’re getting ready to save money in a certificate of deposit, wait until after the Fed acts. Rates on short-term CDs tend to follow the short-term interest rates that track the federal funds rate. Longer-term CDs are influenced by Treasury bond yields and developments in the broader economy.

Excited about the promise of higher CD yields? Read about seven surprising benefits of a rate hike.

Mortgage rates are on the rise. A Fed rate hike this month could accelerate that. Lock the interest rate if you are in position to.

Long-term mortgage rates are indirectly affected by Fed monetary policy. In fact, rates on 15- and 30-year, fixed-rate mortgages don’t always move in the same direction as the Fed. If investors become increasingly sure that the Fed will hike rates this month, then mortgage rates probably will rise in advance of the Federal Reserve’s policy meeting. That means higher mortgage rates will have “baked in” the Fed rate hike ahead of the Fed’s meeting.