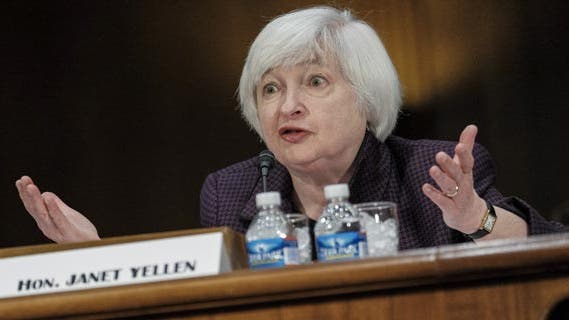 Patience was the buzzword as Federal Reserve Chair Janet Yellen sat down in front of the newly Republican-dominated Senate Banking Committee.

Yellen continued to embrace the notion that the Fed will observe “patience” before raising short-term interest rates. That’s the word used by the Federal Open Market Committee in its statements following the last two meetings on monetary policy. Repeating what she said at her December news conference, Yellen indicated that a rate hike is unlikely for at least a couple of FOMC meetings.

Patience was also the order of the day for Yellen herself as the chief central banker, nominated by Democratic President Barack Obama, was grilled by Republican panel members.

“There is an even greater need now for additional oversight by Congress and further reforms” of the Fed, said Alabama Sen. Richard Shelby, the committee chairman.

Regarding the Fed’s management of interest rates, Shelby said, “Many question whether the Fed can rein in inflation and avoid destabilizing asset prices when the time comes to unwind its massive $4.5 trillion balance sheet.”

Before Republicans won control of the Senate last November, Shelby had voted against Yellen’s appointment as Fed chief.

Mixed signals on the economy

On the economy, Yellen said, “Since my appearance before this committee last July, the employment situation in the United States has been improving along many dimensions.”

While acknowledging that the 5.7 percent unemployment rate is down “from 10 percent at its peak in late 2009” and that the U.S. is seeing rising monthly job gains, Yellen said, “Room for further improvement remains.” She noted two areas of particular concern: The number of Americans working-part time who would like full-time work and the lack of wage growth during the recovery.

Still, she said: “There is reason to feel good about the economic outlook.”

In the face of lower oil prices and despite risks abroad, including slow or slowing growth in Europe and China, Yellen said, “The risks to the U.S. outlook are nearly balanced.”

Sen. Sherrod Brown of Ohio, the ranking Democrat on the committee, questioned Yellen about the “Audit the Fed” effort backed by Sen. Rand Paul, R-Ky.

The Fed chief was ready for the question, holding a large volume which she said was an independent audit conducted by Deloitte & Touche. Yellen said she “strongly opposed” the audit proposal in Congress, saying that the central bank already faces thorough review. If the monetary policy decisions were subject to further oversight, Yellen said the effect would be to apply “short-term political pressures” on the Fed.

As was the case during her confirmation hearing last year, Yellen found support from Republican Bob Corker of Tennessee. He concurred with her assessment that Congress could interfere with Fed decision-making, and said that is “not a good idea.”

Some of the most-tension filled moments during the hearing came during questioning from Sen. Elizabeth Warren, D-Mass., one of the staunchest critics of big banks in the Congress. Warren quizzed Yellen about an attempt to get a briefing from the Fed about an internal investigation into alleged “market-moving” leaks of information during an FOMC meeting in September 2012. Warren said that she and Rep. Elijah Cummings, D.-Md., had sent a letter earlier this month asking for information about the probe.

Upon repeated “yes or no” questions, Yellen eventually said a briefing would be provided. In response to the alleged incident, the Federal Reserve changed its procedures allowing journalists to be given early access to statements on monetary policy.

The FOMC’s next meeting is slated for March 17-18, with other scheduled gatherings to follow in late April and mid-June. Economists have generally thought that the Fed could raise interest rates as early as the June meeting. Yellen said little if anything to force a re-thinking of that possible timeline.

In reaction to the Fed chair’s Senate appearance, Lindsey Piegza, chief economist for Sterne Agee, said, “Investors looking for clarification in terms of the timing of the first rate increase were once again disappointed.” One should also add they likely were also not surprised.