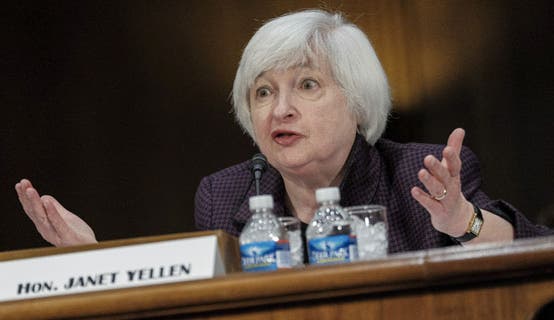 The Federal Reserve is “likely” to raise interest rates before the end of this year if the economy remains on track, Fed Chair Janet Yellen told Congress on Wednesday. She noted that the central bank remains, as ever,  dependent on economic data for guidance.

The central bank’s own data, contained in a Beige Book survey released hours after Yellen’s appearance at a U.S. House hearing, portray an economy that’s picking up steam.

“If the economy evolves as we expect, economic conditions likely would make it appropriate at some point this year to raise the federal funds rate target, thereby beginning to normalize the stance of monetary policy. Indeed, most participants in June projected that an increase in the federal funds target range would likely become appropriate before year-end.”

Yellen’s testimony didn’t clarify “whether the move is likely in September or a bit later,” a note from High Frequency Economics reported.

What’s going on in the economy that’s so acceptable to the central bank? Look no further than the Beige Book, which takes the temperature of the national economy on the basis of anecdotes and data collected across the 12 Federal Reserve districts. Fed policymakers will refer to the survey findings during their upcoming meeting, July 28-29.

In general, economic growth expanded in all 12 Fed districts. Consumers spent at a decent clip over the period between mid-May and the end of June.

The outlook for employment in most districts was optimistic. “Employment levels picked up in various industries across districts since the last reporting period,” the report notes.

Wages, as many workers already know, aren’t exactly straining at the seams, except for some specialized areas such as IT and construction. But there is good news. There may be some momentum gathering toward higher wages, at least in some areas.

“… Announcements of minimum-wage hikes and pay increases at a number of large retailers could prompt broader wage pressure across other industries as firms compete to remain attractive employers,” the Fed report says.

Between the middle of May and the end of June, inflation stayed “subdued” and retail price growth even slowed in some areas. The strong dollar may be responsible for some of the reported squishiness in prices.

Best, worst industries for the period

It’s a seller’s market in the construction industry: The report says that shortages of skilled labor have bedeviled several districts, including Boston, Atlanta, Minneapolis and Dallas.

Generally, stronger industries over the period were: tourism, save for in New York, which is having something of a drought of tourists; non-financial services; real estate and construction; as well as banking and financial services.

Manufacturing, agriculture and natural resources readings seemed a bit lackluster. Rain and avian flu hurt the agricultural industry in several areas, and reports on the energy industry were mixed as were reports on manufacturing.

Here are some of the anecdotes collected in the Beige Book across industries and areas.

In Boston, “One contact reports having raised some prices in order to cover salary increases for a class of employees that had not seen a salary increase in five years.”

Jobs in New York went like hot cakes between May and the end of June: “A major New York City employment agency reports that conditions have strengthened substantially across the board in recent weeks and notes that hiring activity is unusually brisk for this time of year.”

In Cleveland the job market is a bit cutthroat: “One chain noted that its employees are more enthusiastic and turnover is lower as a result of an increase in the hourly wage rate. Another contact said that retail employees will readily change jobs for an additional 10 cents per hour.”

The Richmond district experienced improving home sales. “A Realtor in Baltimore reported an active market for homes below $500,000, noting that properties in excellent condition sell quickly.”

St. Louis was a bit too soggy for agriculture over the period. “A southern Illinois corn farmer noted, ‘There is good drainage around here, but there’s no way to deal with that much rain.'”

The next issue of the Beige Book from the Federal Reserve will hit in September.