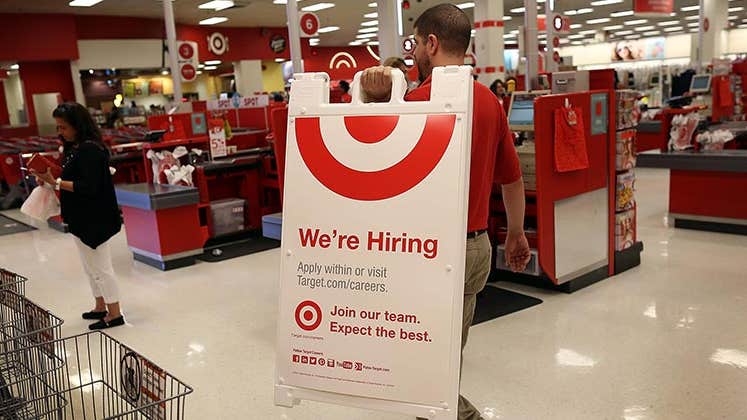 Hiring fell short of expectations in September, as new figures from the Labor Department show the economy continues to expand slowly and steadily. That’s not a bad thing for a middle-aged expansion that first emerged in the wake of the financial crisis in mid-2009. It probably means that the Federal Reserve, led by Chair Janet Yellen, remains on course toward a December interest rate increase.

The unemployment rate edged up to 5% in September as hundreds of thousands of Americans resumed looking for work. “This bolsters Yellen’s view that there is still excess slack in the labor market that is still getting absorbed. Discouraged workers do appear to be re-entering the labor market today,” says Scott Anderson, chief economist with Bank of the West.

Employers added 156,000 jobs to their payrolls last month, down from a gain of 167,000 in August and below analysts’ expectations.

Impact on the election?

There’s just one more jobs report from the Labor Department before Election Day, and it will cover the employment situation for October. Let’s not forget, though, that ballots are already being cast across much of the country, via absentee and early voting. It is highly unlikely that the story line about the economy is going to change substantially between then and now so much that it alone would shift allegiances in the presidential slugfest.

A broader measure of job market stress, what’s called the U-6 rate capturing those who are under-employed or too discouraged to look for work, was steady at 9.7% last month, down sharply from the recession peak of 16.9%.

Wages are on a bit of a rebound. But average hourly earnings that rose 2.6% over the past year simply reset things to where we were just a few months ago.

Where were the job gains?

With manufacturing relatively weak, the goods-producing sector is a virtual no-show when it comes to jobs creation. Employment growth is dominated by services:

Recent news about a rise in household incomes has been a welcome development. But it will take further gains for more Americans to have a sense that they’ve arrived at a financial destination they’ve been dreaming about. If the recovery, now mature, can continue, that should help. For every month that we see more than 100,000 jobs added, we reduce slack in the job market.

Get some interest on your savings beginning today by shopping money market accounts.

What about the Federal Reserve?

Despite what Fed officials say publicly, they want to get past the uncertainty of the election before pulling the trigger and raising interest rates again. Earlier this year, they held off on a rate hike just ahead of the U.K.’s vote to exit the European Union. That vote didn’t go as many expected.

After seeing the latest jobs data, Stu Hoffman, chief economist with PNC Financial Services, says: “This will give Yellen a green light to go (that is, raise rates) in December.”

Circle your calendar: The last meeting of the year for the Fed’s policy-setting Federal Open Market Committee is scheduled for December 13-14.