Half of American women worry about becoming a bag lady, according to a 2013 Allianz survey, and those fears aren’t necessarily irrational: Poverty rates for older women are nearly double those for men. The gap has persisted in recent decades even though more women work and contribute to retirement funds.

Researchers are still trying to puzzle out all the reasons elderly women’s poverty rates have remained stubbornly high, said Matt Rutledge, research economist for Boston College’s Center for Retirement Research. But findings so far indicate several ways women can reduce the odds of ending up old and broke. 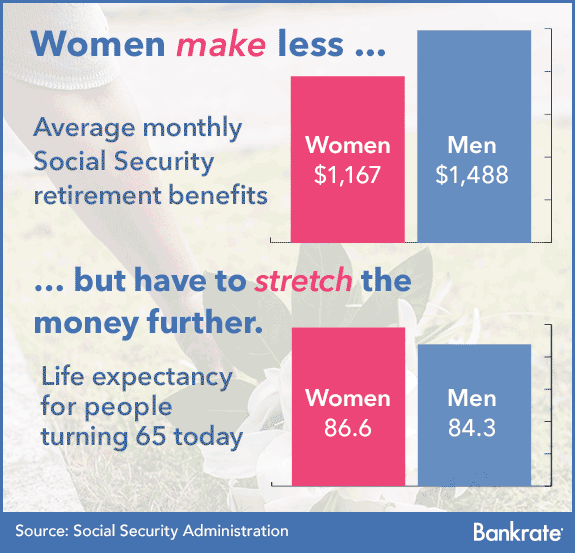 People on average plan to retire 4 to 5 years too soon to maintain their pre-retirement standard of living, a study for the Center for Retirement Research recently found, and poorer households are more likely than wealthier ones to quit work prematurely. Working a few extra years, even part time, helps preserve retirement savings and can dramatically decrease the odds of running short of money in old age.

For women, working longer can help offset the retirement-threatening risks of living longer, being paid less and having gaps in earnings. (Women on average have fewer years in the workforce than men, largely because of caretaking responsibilities.)

Your Social Security checks will be permanently reduced if you apply before full retirement age (currently 66, but rising to 67 for those born in 1960 and later). That reduction can come back to haunt you, because the longer you live, the more likely you are to exhaust your savings so that Social Security is your only source of income.

Making sure your benefit is as large as possible can help assure a better quality of life. This is critically important for women, whose greater longevity means they often outlive their spouses. If both partners can’t delay benefits, married couples should try to make sure the higher earner waits as long as possible because that’s the amount the survivor will have to live on.

Passing up money today in favor of more money tomorrow is hard for us to do.

Nearly all retirees living in poverty have at least 1 chronic health condition: 96% report health problems such as high blood pressure, diabetes, mental illness or arthritis, compared with 62% of retirees living above the poverty line, according to the Employee Benefit Research Institute. What’s more, 70% of poverty-stricken retirees have suffered an acute health crisis, such as cancer, lung disease, heart problems or a stroke, compared with 48% of those above the poverty line.

A healthy lifestyle won’t make you immune to medical issues and the rising costs of health care. But you can increase the odds of avoiding disease by maintaining a healthy weight, eating right, exercising, not smoking or using drugs, and drinking only in moderation.

Another Center for Retirement Research study found that people were less likely to wind up in poverty if they didn’t take lump-sum distributions from their retirement funds before age 55 and if they opted for “joint and survivor” payouts from pensions. Joint and survivor payouts offer married couples smaller monthly payments compared with the “single life” option, but those payments continue even after 1 member of the couple dies.

Passing up money today in favor of more money tomorrow is hard for us to do, behavioral economists tell us. That’s why it’s tough to save for retirement in the first place. But leaving retirement funds alone for retirement, and factoring in the risks of longevity, can help the money you save last longer.