Flood insurance too high? You may have options 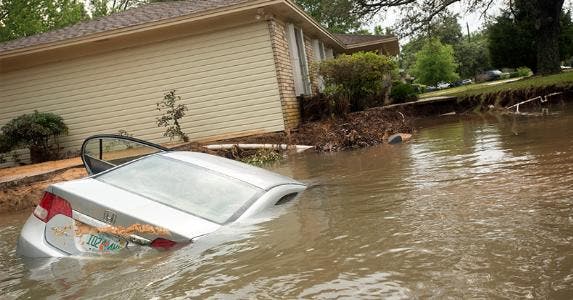 The federal government’s flood insurance program is deep in debt, and the financial burden is flowing to its policyholders. Consumers in coastal areas who feel they’re getting soaked by surging premiums are anxiously searching for relief. And some are finding that less expensive private flood insurance options may be available.

The government’s National Flood Insurance Program, or NFIP, is administered by FEMA, the Federal Emergency Management Agency. NFIP offers coverage that protects property owners from damage caused by rising water — a hazard not covered by a standard home insurance policy.

Homeowners in high-risk flood zones have been trying to keep their heads above hefty flood insurance rate hikes that took effect in 2013 as part of a law overhauling the NFIP. The Biggert-Waters Flood Insurance Reform Act was meant to shore up the program after it took major financial blows from recent natural disasters.

Compare Home Insurance Quotes and Save!

“Following Hurricane Katrina and then Superstorm Sandy, the National Flood Insurance Program is tremendously in debt now,” running a deficit of at least $24 billion, says David Marlett, an insurance professor who chairs the department of finance, banking and insurance at Appalachian State University in Boone, North Carolina.

The reform law brought increases in premiums of as much as tenfold — or worse, he says.

So what else is there?

Private companies that provide flood insurance are few and far between, and their premiums may not be considered affordable when compared with the federal flood coverage, says Don Griffin, vice president of personal lines for the Property Casualty Insurers Association of America.

This goes back to why the federal flood insurance program was created: Many private insurance companies stopped offering coverage for flooding following massive and expensive floods that plagued communities along the Mississippi River in the 1960s.

Griffin says his group conducted a study in 2011 that found that for private insurers to offer flood insurance, they would have to charge two to three times what the government charges.

“There’s a lot of speculation that the industry might be able to better price this product, which we may,” he says, “but for those that are in harm’s way — and those are the ones that are seeing the dramatic increases — the private alternative will not likely be less expensive.”

One private flood insurance option is offered by a Florida-based company, Homeowners Choice Property & Casualty Insurance Co. It recently began to offer flood insurance policies in the Sunshine State that are said to be “priced similarly to what Florida residents were paying before the Biggert-Waters Act,” according to a statement.

For example, a property owner in a high-risk flood zone seeking $250,000 of building coverage and $100,000 of contents coverage could get a premium for nearly $3,000, says Kevin Mitchell, a vice president of HCI Group Inc., which owns Homeowners Choice.

“Our opportunity here is to get the word out and let homeowners in Florida — policyholders and non-policyholders — know that there’s an alternative to the National Flood Insurance Program,” Mitchell says.

Lloyd’s of London, the insurance giant based in the United Kingdom, also underwrites flood policies, through another Florida-based company called The Flood Insurance Agency. The coverage is available in more than 20 states, including Alabama, Florida, Louisiana, South Carolina and Texas.

However, if you have a mortgage, there’s no guarantee that your lender will approve of flood insurance outside of the federal program.

“Even though there might be a private market solution on a very limited basis, even then the banks may not accept that as acceptable flood insurance,” Marlett says.

If purchasing a private policy does not work in your favor, “self-insurance” — setting money aside to cover a potential loss — may be another option, although it is not recommended.

“While most people can sustain a partial loss to their property, if their home is indeed washed away, then they have nothing left,” Griffin explains.

The newer law also has required insurers to refund some of the steep premium increases that resulted from the 2012 law. And, it paves the way for a study to be completed on how to keep flood insurance affordable, particularly for the poor.

The changes “reduce some of the harmful effects of Biggert-Waters without undoing the numerous positive provisions within the law,” Robert Rusbuldt, president and CEO of the Independent Insurance Agents and Brokers of America, said in a statement.