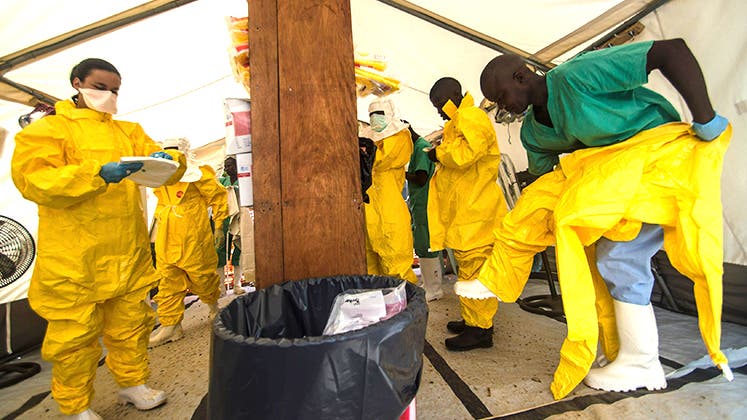 Humanitarian workers willingly place themselves in harm’s way by traveling to the world’s most remote and underdeveloped regions to fight poverty, hunger, illiteracy and disease.

Who has their backs while they’re making the world a better place from dangerous threats, such as the Ebola virus?

Although the recent evacuation to the United States of two American aid workers who contracted Ebola while working in West Africa made headlines nationwide, such airlifts are both commonplace and typically covered under these insurance plans.

“Evacuation is often used, probably more than you would see with traditional expat insurance,” says Bart Jordens, general manager of global IGO/NGO insurance for Vanbreda International, a division of Cigna based in Antwerp, Belgium.

“In remote areas of Africa, South America or South Asia, adequate health care may not be available, so we need to evacuate them to Nairobi, Johannesburg or maybe Bangkok or Singapore,” he says. “It’s used a lot.”

And yes, policies for humanitarian workers typically cover all diseases, including Ebola.

“No diseases are specifically excluded,” Jordens adds. “While some health products would exclude HIV/AIDS, for example, that would be unheard of for the IGO/NGO population; it’s even explicitly included for them.”

However, experimental drugs, such as those that saved the Ebola-afflicted American volunteer workers Dr. Kent Brantly and Nancy Writebol, would likely not be covered.

“Typically, experimental drugs are excluded, with the exception of some drugs being used in clinical formal trials or considered for ‘compassionate use,'” says Cigna spokeswoman Jessica Iben.

While aid-worker insurance might best be described as international travel insurance on steroids, its core is a robust group health plan, says David Tompkins, president of TFG Global Insurance Solutions, an international insurance specialist based in Vancouver, British Columbia.

“It’s just like buying a health plan in the United States, but it covers them globally, essentially, and includes the capacity to pay claims directly, whenever possible,” he explains.

A package of protection

Health plans for humanitarian workers can be tailored to specific regions. Worldwide coverage, however, typically comes in two flavors: either including coverage in the United States or specifically excluding it.

“There’s a big price break for plans that exclude the United States, but if they’re sending Americans abroad, they would most likely have a plan that includes it,” says Tompkins.

How the coverage costs are borne

Who pays for this suite of insurance coverage?

Nongovernmental organizations in war-torn regions may also tack on policies to cover war and terrorism, kidnap and ransom, and accidental death and dismemberment, says Frank Zuccarello, an executive vice president with Exceptional Risk Advisors, an insurance brokerage based in Mahwah, New Jersey.

“The benefits can run one or two times salary for things like bodily harm, a war risk, a shooting, a mine going off,” he says. “These are the good souls of the world; we try to help them out where we can.”

Jordens admits it’s difficult to compare aid-worker policy costs with everyday employer-based plans, as no two of these specialty insurance policies are exactly alike and all differ dramatically from domestic coverage.

While underwriting typically takes into account the region and even the individual countries where the workers are stationed, the policies are notable for adhering to the international “duty of care” concept, which calls for humanitarian organizations to provide for their workers — before, during and even after they’ve served in harm’s way.

“If something happens to you while you are on a critical mission for an organization, that organization has a duty of care to also make sure that, in the future, you are protected (with disability and other benefits, if you need them), even though you are no longer working for the organization,” he says.