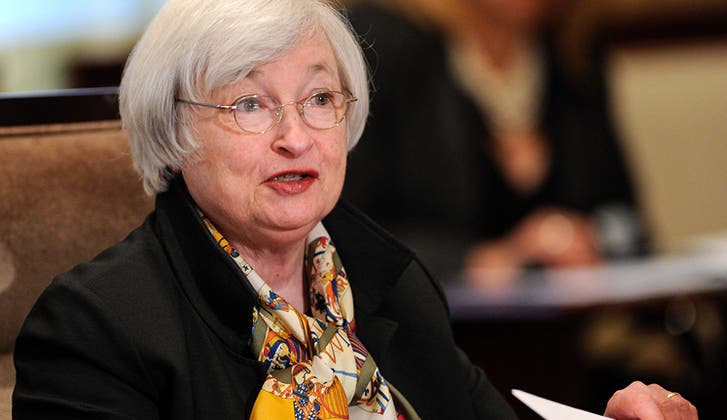 In the lead-up to Christmas, the Federal Reserve will put a bow on the first year under Chair Janet Yellen and try to avoid delivering a lump of coal for financial markets during the last monetary meeting of 2014.

The Fed may give a stronger signal that a change in interest rate policy is coming in the new year, given the ongoing improvement in the job market and the boom times on Wall Street. But it must continue to move delicately, so that it doesn’t rattle the markets and risk throwing the economy’s progress off track.

As a first hike in rates since 2006 likely draws closer, the policymakers on the Federal Open Market Committee have kept clinging to language saying they expect to keep interest rates low for “a considerable time” following the Fed’s bond-buying program. That economic stimulus concluded in October. The official statement after this week’s meeting will be examined closely for any new clues on the rate hike timing.

The statement will share a spotlight with a Yellen news conference and the FOMC’s updated economic projections.

The overwhelming majority of economists responding to the recently published Bankrate Economic Indicator survey looked for the Fed to hike rates in 2015. A popular prediction was that the first increase would come in June.

Economist Neil Dutta with Renaissance Macro Research says the so-called hawks and doves at the Fed agree a rate hike should come, but the question is: When, exactly?

“A dove is going to be advocating for a September rate hike, and a hawk is advocating for April or June rate hike,” he says. “The real question at this moment is how quickly they go (raise rates), once they begin.”

Time for ‘considerable time’ to go?

Minutes released after the FOMC’s most recent meeting in October tell of debate over whether to remove the “considerable time” language. Some of those opposed to ditching that phrase worried that the Fed could be “signaling a significant shift in the stance of policy, potentially resulting in an unintended tightening of financial conditions.” The minutes stated that “a couple of others” thought the change risked suggesting an earlier “liftoff,” or rate increase, than was appropriate.

At the October meeting, the wording stayed in.

Dutta thinks we’ve seen the last of it. “There is increasing evidence that they will remove the ‘considerable time’ language from their statement,” he says.

“They should have dumped it a considerable time ago,” says economist Robert Brusca of FAO Economics, adding that he’s been surprised by how long the language has lasted. “It’s like Yellen is giving her FOMC speeches clutching her favorite teddy bear.”

As the Fed inches cautiously toward a rate hike, it’s taking cues from the recovering job market.

The Labor Department’s surprisingly strong November employment report showed that a healthy 321,000 jobs were added to payrolls and indicated a slight acceleration in wages for the first time in years.

Analysts generally agree a series of blockbuster jobs reports is needed before the FOMC will feel confident that the economy can handle higher interest rates. “The November report was a welcome step, but the strength will have to be repeated and for numerous months, a feat that will not come easily,” says Lindsey Piegza, chief economist with Sterne Agee.

Yellen holds news conferences after only four of the Fed’s eight regularly scheduled policy meetings each year. She’ll make one of these appearances following the upcoming FOMC meeting.

Simultaneously, the FOMC releases a new “Summary of Economic Projections” after every other meeting. Included is the so-called dot plot, which shows FOMC members’ forecasts for the path and timing of future interest rate moves. The dots also reveal expectations for inflation, unemployment and growth.

After the September meeting, the dot plot showed a path toward steeper rates than had previously been indicated. But it competed for attention with the official FOMC statement. At her news conference, Yellen sought to downplay the change and the potential for conflict.

“What you don’t see in the dot, so-called dot plot is also the uncertainty that each individual, each participant, sees around their own projection. So things will depend on how the economy evolves. That will change over time, and there’s a good deal of uncertainty associated with it,” she told reporters.

The Fed is required by law “to promote effectively the goals of maximum employment, stable prices and moderate long-term interest rates.”

While the job market is looking better, with unemployment at 5.8 percent, it has yet to see “full employment.” Inflation has been running below the central bank’s 2 percent target. Falling crude oil and gasoline prices are being welcomed by consumers, but may make reaching the inflation target more difficult.

New York Fed president William Dudley recently noted that “the Committee is still undershooting both its employment and inflation objectives. Unemployment is too high and inflation is too low.”

Most Fed policymakers have refocused on weak inflation and have stopped talking about unemployment, Brusca says. He also notes that you don’t hear Fed officials “saying that the economy looks good.”

“Lower oil prices and lower inflation, of course, will ease some pressure for the Fed to act,” says Doug Handler, chief U.S. economist with IHS Global Insight. At the same time, “lower energy prices are acting like a huge stimulus for the economy,” he says, adding that it’s similar to a tax cut for Americans.

A big question for the year ahead is whether the Federal Reserve finally will apply a kind of tax on the economy through a rate hike and whether it will be the first of several. As Dudley indicated in a recent speech, how consumers, investors, borrowers and the markets respond remains the great unknown.