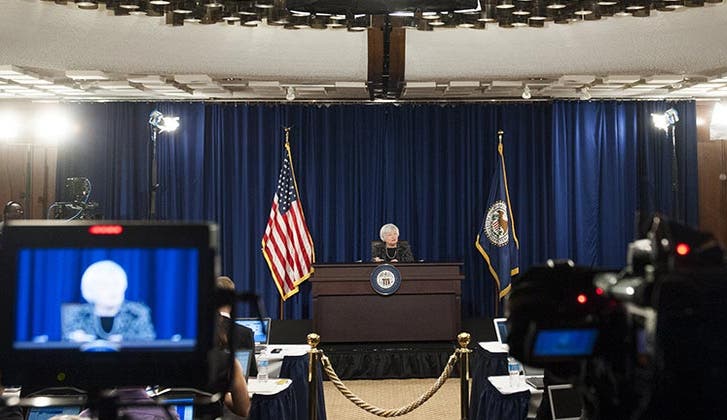 The May jobs report poked a hole in the balloon of gossip that surrounds the monthly rate-setting meeting of the Federal Open Market Committee.

The CME Group FedWatch index, an indicator that predicts the possibility of a Federal Reserve rate hike, dropped to below 4% on June 3. The probability had been 19%.

A boost in the federal funds rate, the rate at which banks and credit unions lend reserves to other institutions overnight, seemed less and less likely even before the announcement.

Then came the Labor Department’s report that put the number of jobs created last month at only 38,000. It also revised downward the 2 previous months’ estimates.

“When I first heard the number, I was shocked. It was so far below my guess,” says Alan MacEachin, corporate economist for Navy Federal Credit Union.

With 6-figure job increases in both previous months, MacEachin had thought 200,000 new jobs would have been created.

Still, many economists thought the June meeting was a no-go for a rate increase for factors other than just jobs.

For one thing, the referendum in the United Kingdom known as Brexit, on whether to exit the European Union, is scheduled for June 23, a week after the FOMC meeting. The Fed is sensitive to taking any action that would interfere with the vote.

The Fed pays close attention to an inflation measurement called the personal consumption expenditures price index. The April index increased by 1.1%, year over year. Excluding food and energy, it increased by 1.6% year over year, according to the Bureau of Economic Analysis.

Scott Summer, director of monetary policy at the Mercatus Center at George Mason University, sees a dilemma for the Fed on inflation that makes it difficult to raise rates until inflation is going in the right direction.

Softness around the globe

Global economies also are struggling. Some have been hurt by the fall in the price of commodities and raw materials. China has suffered a downturn. Brazil is facing political instability. Fiscal austerity is still the policy in Europe, but the European Central Bank cut its deposit rate to -0.4% to encourage banks to lend money rather than hold it overnight.

“The Fed has made it pretty clear that that’s where the majority of the risk to their forecast lies — the global economy,” says Curt Long, chief economist for the National Association of Federal Credit Unions.

Some Fed presidents have said a rate increase is due. Some had said they could foresee 2 or 3 rate increases by the end of the year. But, that was before the jobs report.

“I’m sorry that too many of them have been hawkish. Their arguments are that we shouldn’t have rates this low this long, and that’s not good logic. I mean, I normally don’t like to be mean-spirited, but it’s silly,” says AFL-CIO chief economist William Spriggs.

Looking ahead to the timing of the FOMC’s July meeting, the Fed will no longer have the UK vote to fret over. It also will have one jobs report for reference before its meeting.

Even so, some economists see September as more realistic timing for a rate hike. The Fed will have 3 jobs reports to ponder, giving rate setters plenty of data to pore over. And it’s still 6 weeks removed from the presidential election, MacEachin says.

“The Fed doesn’t raise interest rates near an election,” he says.

RATE SEARCH: If a home equity loan or home equity line of credit is in your future, you’ll find the best rates today at Bankrate.

Regardless of a July or September rate hike, it’s difficult to imagine more than 2 additional rate hikes through the end of the year.

“The last time the Fed raised rates — back in 2004 — they raised them by 2% in a year. Now we’re raising rates a half of a point. That extremely cautious, extremely modest,” says Steve Rick, chief economist of CUNA Mutual Group in Madison, Wisconsin.

To be sure, the opinion leader in this argument is likely to be Yellen herself.

In a speech last week, Yellen admitted that the May jobs report was disappointing. “Although this recent labor market report was, on balance, concerning, let me emphasize that one should never attach too much significance to any single monthly report,” she said.

She was even upbeat at times. The May unemployment rate fell to 4.7%, wages grew by 2.5% year over year and the quits rate was at an all-time high in March, she said. The quits rate is the share of employees who voluntarily leave their jobs, a sign they are confident about the job market.

RATE SEARCH: Even if your weekly wages aren’t huge, you might want to invest some money in certificates of deposit. You’ll find great CD rates today at Bankrate.

Yellen also may have signaled how she will vote. She said the Brexit vote could have significant repercussions. (Read: “We don’t want to screw things up in the UK.”) She said inflation has been below the Fed’s 2% goal, with the oil prices falling since 2014 and the value of the dollar strengthening against foreign currencies, holding down the price of imported goods. (Read: We still have room for inflation to move higher.)

“As the downward pressure on prices from these 2 forces dissipates and as the labor market strengthens further, I expect inflation to move back to 2%,” she said.

Scanning the Fed statement for clues

With a rate increase in June off the table, Fed watchers will comb the FOMC’s statement and tune into Yellen’s press conference on Wednesday, looking for signs for when the Fed will actually raise rates.

Some variables that the Fed likely is monitoring include whether the job market is tightening, wage growth is accelerating and inflation is moving toward the Fed’s 2% target.

“Just that phrase, ‘continued tightness in the labor market.’ If they believe it’s continuing to tighten, which would bring on higher wage pressures, which leads to inflation, that would be a big sign,” CUNA Mutual Group’ Rick says.