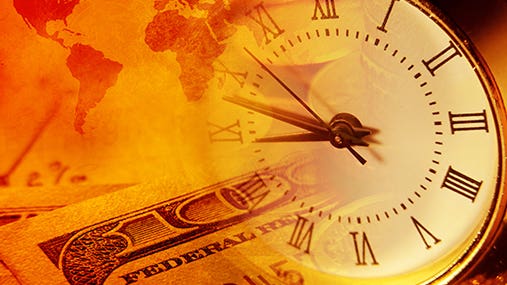 For a century, the Federal Reserve has tried to steer the economy by deploying its tremendous financial resources in various ways. Since the 2007 financial crisis, its primary goal has been to help businesses borrow money, create jobs and grow the economy.

To that end, it has been aggressively buying bonds and mortgage-backed securities and flooding banks with billions of dollars, giving them a surplus of cash that could be used for consumer loans.

The Fed's primary target is the closely watched federal funds rate, which determines how much interest banks charge to loan each other money, usually overnight. If the rate goes up, borrowing costs go up, and that makes it harder for individuals and businesses to get loans.

The Federal Reserve has tried to influence this rate by pumping billions of dollars into the bond market. This has given the banking industry plenty of cash, forcing interest rates lower.

The Fed has been snapping up Treasuries, driving up demand in the bond market and greatly impacting retirement plans. The Fed's strategy boosts the trade value of the bonds while weakening yields and any retirement plan that relies on those yields.

Research by Morningstar Investment Management shows that a slump in bond yields can greatly diminish the lifespan of retirement investments. People who are just entering retirement will be especially vulnerable if their investment portfolios are funded, at least partially, by bonds.

The federal funds rate has a big impact on rates for auto loans. It's so fundamental that it can influence auto loan rates, without even moving. There simply needs to be an expectation by the market that it'll rise or fall in the future, said Steven Szakaly, chief economist at the National Automobile Dealers Association.

Szakaly compares the federal funds rate to the basement of a building. It sets the foundation for other interest rates. When it rises or falls, they do, too.

Aggressive bond buying by the Fed increases the supply of dollars flowing through the banking system. This can devalue the dollar and spark inflation, which the Fed follows closely. So far, however, inflation has been relatively mild.

During the past few years, the dollar has held its value in relation to other currencies. The U.S. economy has grown faster than many of its trading partners since the recession, and that's kept its currency afloat, said Stephen Buser, a finance professor emeritus at Ohio State University.

Since September 2012, the Federal Reserve has been buying $85 billion per month in bonds and mortgage-backed securities in a strategy to keep interest rates low, and mortgage rates have cooperated.

According to Bankrate research, the 30-year fixed rate slipped below 4 percent from May 2012 to May 2013. Like rates on auto loans and other consumer loans, your individual mortgage rate will depend greatly on your individual loan history and credit score.

Returns on other cash-like investments such as bank deposits and money market accounts also suffer as returns plummet.

As bonds are a key component of most retirement investments, especially among seniors as they rebalance their 401(k)s, aggressive bond buying by the Federal Reserve increases the market value of the bonds in their portfolios, since the Fed is essentially boosting demand.

Conversely, if the Federal Reserve eases off its bond-buying efforts -- economists call this "tapering" -- then demand drops in bond markets, and the market value of your bonds will fall.

Nobody wants to get stuck paying higher shipping costs. Instead, the cost increases usually get passed down from producer to wholesaler to shipper to retailer to you. During the past several years, as Fed policies helped boost fuel prices, shippers of produce, florists and pizza parlors added or increased delivery fees. FedEx and UPS have boosted fuel surcharges, as well.

When fuel costs decline, as they are doing now, many of these stores have held on to those charges, just in case prices rise again.

Ever since we've been pumping oil, it's been the yin to the dollar's yang. When the value of one goes up, the other goes down. The reason has to do with the relationship between oil and the dollar.

Oil, which is priced in dollars, is directly influenced by how the dollar is valued versus other currencies. When the dollar weakens, buyers holding foreign currency will have more purchasing power and will buy more oil. That boosts oil demand, which forces prices higher.

The economy also is driven by consumer spending, and that makes it especially sensitive to inflation. When prices go up, people tend to spend less. When they go down, people spend more.

Inflation can impact consumers at different times. For example, when gas prices spike, it hurts taxi drivers more directly than others, since they drive for a living. A weaker dollar also increases costs for manufacturers that import raw materials.

When Fed-driven inflation boosts oil prices, it drives up the cost to make gasoline and other petroleum-based fuels. Those cost increases usually get passed along from refinery to gas pump, forcing drivers to shell out a few more dollars every time they fill up.

Higher fuel prices also raise costs for taxi services and airlines, and when possible, they try to pass along those higher costs in the form of higher fares and airline baggage fees.