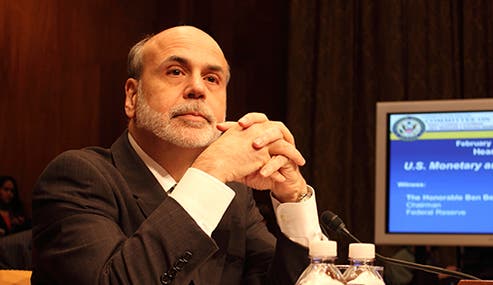 The Federal Reserve is at risk of failing its two primary responsibilities: control inflation and foster full employment. That’s why this week it may hint that it will keep printing money through the year — possibly more money, if needed.

The Federal Open Market Committee will continue to maintain the benchmark federal funds rate near zero percent and buy $85 billion a month in securities at its meeting this week. Both efforts help keep interest rates on loans very low, so businesses and consumers will borrow, spend and stimulate the economy.

What’s uncertain is when the group will scale back its third round of asset purchases, called quantitative easing, and eventually end the program altogether. Not long ago, investors and economists had expected the central bank to taper its QE3 purchases in the second half of this year. Minutes from the FOMC’s March meeting showed similar sentiment among many members.

But that was before the beginning of what could be another spring swoon:

“There has been almost a pivot around the desire to end QE3 early to strengthening it because inflation is so low,” says Paul Edelstein, director of financial economics at IHS Global Insight. “Some Fed members are starting to change their tune.”

During the first and second rounds of quantitative easing, the major concern was that inflation could rise too high. That same worry popped up last year, when QE3 was introduced in September and expanded in December to compensate for the end of Operation Twist, which swapped out shorter-term securities on the Fed’s balance sheet for longer-term ones.

But in recent weeks, the conversation has changed. The worry is that inflation may be too low.

The FOMC’s target for inflation is 2 percent. This year, it’s been running uncomfortably lower than that, with February’s year-over-year reading coming in at about 1.3 percent. Weak inflation indicates that people are reluctant to buy and they expect weak growth, says Edelstein.

With inflation no longer a concern, the FOMC is more likely to consider maintaining the monthly $85 billion in Treasury and mortgage-backed security purchases until the beginning of next year. Increasing the program isn’t out of the question, either, especially if the jobs outlook remains dim.

The other mandate: Jobs

While inflation is running too low for comfort, unemployment is raging too high. The Fed won’t increase the federal funds rate until the jobless rate falls to 6.5 percent. And the central bank is expected to rein in QE3 purchases only as the job market improves.

But here’s where that fares: The economy produced only 88,000 jobs in March, well below what investors were expecting. The unemployment rate fell last month to 7.6 percent. But many worry the decline was not because more people found jobs, but because more have thrown out their resumes and have settled in Mom’s basement for the long haul. April’s unemployment report is due out Friday.

“The jobs numbers are not ramping up as the Fed would like. They don’t want to see that let-up going into summer that we’ve seen the last few years,” says Brian Rehling, chief fixed-income strategist for Wells Fargo Advisors. “They won’t take their foot off the pedal.”

No one expects any new action from the Fed this week, but investors and economists will pick apart the Fed statement for any indications of future moves. The key takeaway is how the committee characterizes the softening economy, says Bernard Baumohl, chief global economist for The Economic Outlook Group.

“The Fed,” he says, “might make references that while the economy is growing, it doesn’t yet have sufficient evidence that this strength can be sustained without quantitative easing.”

When it can, remains to be seen.