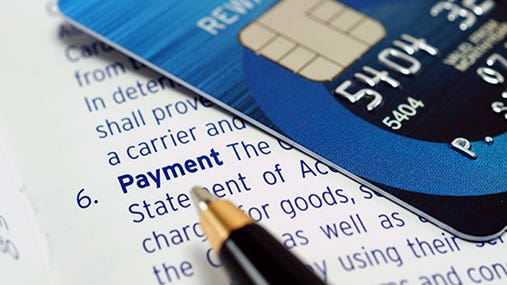 The prepaid debit card industry is undergoing a transformation, and this makeover is looking good for consumers.

Bankrate’s 2014 Prepaid Debit Cards Survey shows that while prepaid card offerings continue to vary widely, the industry is moving toward lower fees and more transparency as it becomes a more mainstream product.

“Prepaid cards initially were rife with all kinds of ancillary charges,” says Bankrate chief financial analyst Greg McBride. “The evolution of the marketplace over the past couple years has not only brought fees down, but also made them more transparent.”

The evolution of the prepaid business

For years, the prepaid card business was relegated to the periphery of the financial sector, seen by those in the industry as mostly a product for underbanked or unbanked consumers, people who rarely use traditional banking services.

But while the financial industry may have seen reloadable prepaid cards as a fringe product, the average consumer did not, says Ben Jackson, a senior analyst at Mercator Advisory Group.

Between 2009 and 2012, prepaid card payments increased faster than credit, debit and check payments, according to a 2013 report by the Federal Reserve. Consumers loaded an estimated $71.6 billion onto general-purpose reloadable prepaid cards in 2013, according to the research firm Mercator, up from $56.8 billion in 2011. Mercator forecasts that number to jump to $97.9 billion by 2016.

Companies are taking note by ratcheting up their prepaid card offerings, catering to different niches of customers.

“This product really went from a fringe product to, ‘Oh, no, wait, this can be a tool for the mainstream,'” Jackson says. “That was a cardholder-driven trend.”

Some fees are marginalized

The increased competition has helped marginalize some of the fees associated with general-purpose reloadable prepaid cards, McBride says.

Of the 30 cards examined in Bankrate’s 2014 survey — conducted Feb. 10 to Feb. 19 — 77 percent do not charge for declined transactions under any circumstances, while 10 percent charge $1 to $2 for transactions declined at an ATM.

Only 17 percent charge a fee for making a PIN-based point-of-sale purchase, although 7 percent of the prepaid cards don’t allow users to make PIN-based transactions.

Still, fees and offerings vary widely depending on the cards, the survey data show. And many other types of charges are still common. For instance, most of the cards surveyed charge a monthly fee, although 33 percent will waive that fee, typically based on the amount loaded onto the card.

About half the cards have a one-time activation fee, and all charge a fee for using the card at an out-of-network ATM.

“There’s tremendous variation (among different cards),” McBride says. “You have to shop around and be mindful of those other, ancillary charges that can crop up. That can really increase your total monthly cost.”

Mercator’s Jackson says the difference in fees among the various cards is based on the companies behind the cards and the audience being targeted.

While the overall trend is lower fees for prepaid cards thanks to increased competition, there’s no standard fee structure for cards, he says. Instead, companies set fees based on the audience they’re reaching and where the prepaid cards fit into their business models, he says.

For instance, if a consumer wants a prepaid card to be used in lieu of a checking account, he or she will look for features such as where the card is accepted, how easy it is to load cash onto the card and what the network of ATMs looks like, Jackson says. 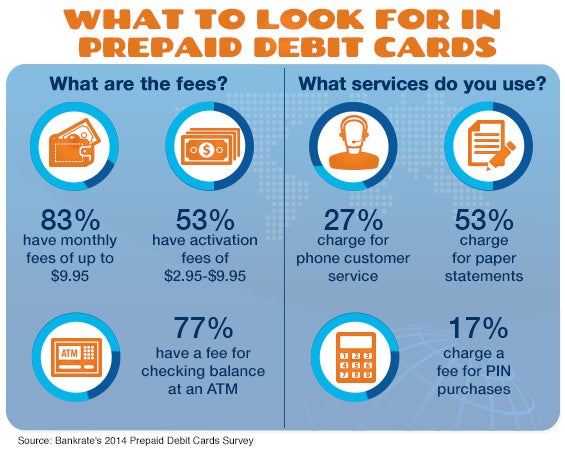 A consumer will look for different features if he or she just wants to use the prepaid card for traveling, or to shop online or to give to a college-aged child.

“Consumers should shop around based on how they think they’re going to use the card,” Jackson says.

A replacement for checking accounts?

The Pew Charitable Trusts recently published a couple of reports on the prepaid card industry noting that, in many instances, a prepaid card can be more affordable than a basic checking account, especially if a consumer tends to overdraft his or her account.

Bankrate’s McBride says one of the advantages for consumers using certain prepaid cards is in knowing how much in fees will be charged each month. In contrast, if a consumer overdraws a checking account more than once in a month, it’s unclear how much could be charged in total, since the overdrafts keep piling up until you discover the problem.

But it’s important to be clear on exactly what fees are involved in a prepaid card, especially given the differences in fee structures. A 2014 Pew survey found that only 32 percent of consumers compare terms before choosing a prepaid card.

Weinstock says Pew bought five cards, cut open the packaging and read the disclosures. She says a card’s monthly fee and activation fee often are printed on the package, but other fees are only in the document, “which you can’t get to unless you purchase the card.”

She adds that the disclosure documents are often long. “They’re dense. Some of them are on onion skin paper,” Weinstock says.

Looking to the future

Weinstock says Pew would like the Consumer Financial Protection Bureau to require adoption of this disclosure form and provide other protections to consumers using prepaid cards, such as mandating that all be insured by the Federal Deposit Insurance Corp.

For its part, the CFPB posted a blog in March saying it is developing a model disclosure form and is working on a proposed rule about prepaid cards and consumer protection. It is soliciting comments from the public on the disclosure form.

Jackson and McBride say the industry is already moving toward more transparency.

“They want to have customers that use their cards,” Jackson says.

But when consumers are tagged by a surprise fee, they may walk away from the card. “All of a sudden, it’s going to be, ‘You ripped me off,'” Jackson says. “The industry doesn’t want that.”