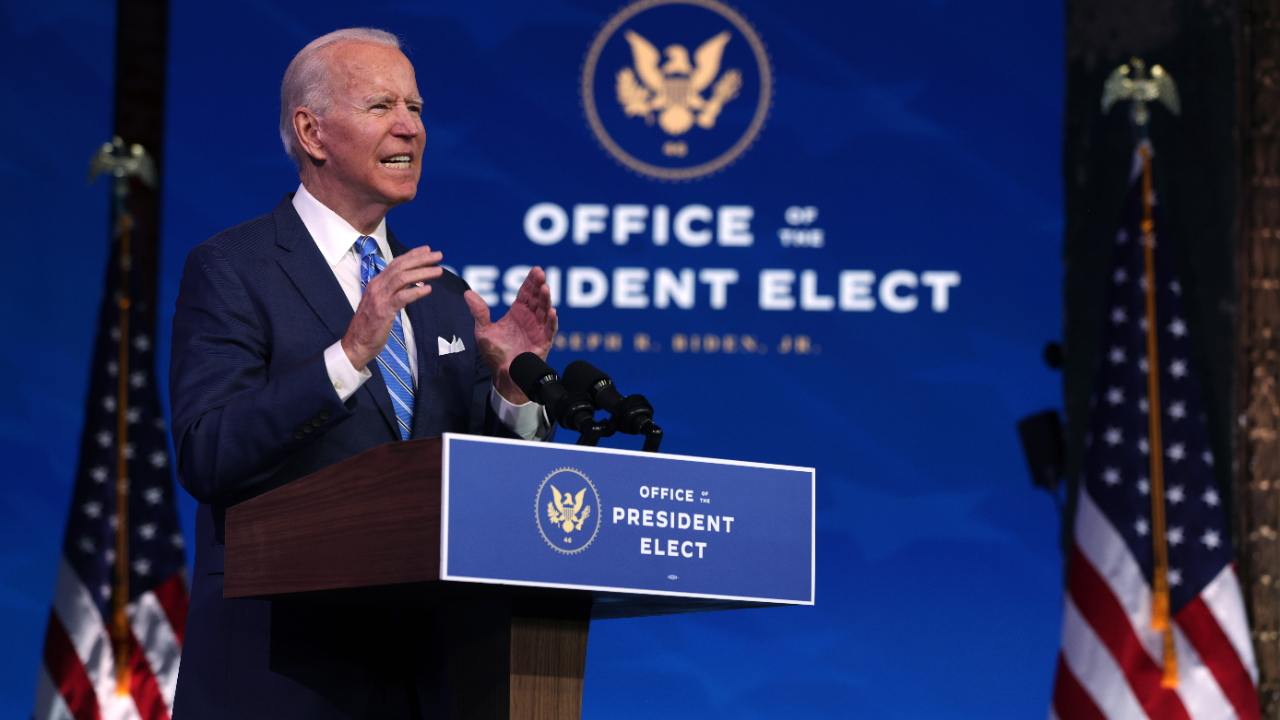 A third round of stimulus payments worth $1,400, enhanced jobless benefits until at least September, tax credits for families with children, more eviction protections and a federal minimum wage hike to $15.

Those are just some of the items on President-elect Joe Biden’s sweeping $1.9 trillion proposal to help both consumers and the economy weather the coronavirus crisis at its most crucial inflection point yet, which he unveiled Thursday less than a week before his administration officially takes office.

Biden will ask Congress to pass his “American Rescue Plan” at a time when U.S. health care workers are racing to vaccinate the public — the U.S economy’s best hope to officially beat the devastating outbreak that’s led to almost 400,000 deaths, cost 22.2 million jobs and put the most Americans out of work since the Great Depression. The rebound also appears to be losing steam, after the most workers since March filed new applications for jobless benefits last week and U.S. employers cut 144,000 jobs last month.

The proposal mirrors the $2 trillion-plus CARES Act from March, with Biden stressing that the $900 billion supplemental coronavirus relief package passed in late December was just a “down payment” on his wish list. The Biden administration in the coming weeks is also poised to release a more comprehensive infrastructure plan to spur job-creating investments.

The plan “will not come cheaply,” Biden said in prepared remarks from Delaware. “But failing to do so will cost us dearly. The consensus among leading economists is we simply cannot afford not to do it. … We need more action, more bipartisanship, and we need to move fast.”

Here are the highlights from the proposed $1.9 trillion package, including what’s in it, how it could impact you and what still needs to happen before the aid hits your wallet.

Another round of stimulus payments worth $1,400 (or more)

The Biden plan includes a $1,400 direct stimulus payment to most middle-income Americans, what’s been touted as a top-up payment to the $600 second stimulus check that millions of Americans received through the Coronavirus Response and Relief Supplemental Appropriations Act of 2021. Between the two packages, that means you’ll see a $2,000 total stimulus check.

Adult dependents would also be eligible for stimulus payments, if Biden’s proposal is approved. Under the previous two relief packages, an individual claimed on another’s tax return was only eligible for a reduced payment, so long as they were under the age of 17.

The Biden plan also expands stimulus check eligibility to households with a mixed immigration status (individuals married to undocument immigrants, for instance), according to documents provided by the Biden transition team outlining the proposals.

Progress on the supplemental economic relief package was nearly derailed back in December, when President Donald Trump demanded lawmakers up their payments to $2,000 from the allotted $600. Senate Majority Leader Mitch McConnell blocked the request, assuming it wouldn’t pierce Republican opposition to sending out more relief checks to those who’ve taken a lesser financial hit during the crisis.

Biden’s plan doesn’t appear to change who is and isn’t eligible based on their income. As was the case during the first and second stimulus check, individuals earning up to $75,000 and married couples making $150,000 a year would receive the full $1,400 and $2,800 payment, respectively. After that, checks would decrease by $5 per every $100 over the income lineup until an individual income level of $103,000 or more a year and a household income of $206,000 or above annually.

Extra $400 in weekly unemployment checks through at least September

Biden’s plan includes a boost to weekly jobless benefits to help backstop unemployed Americans’ finances at a time when more than 18 million are claiming some type of benefit, according to the Department of Labor — though the actual number is bound to be higher amid technological issues, delays and a temporary lapse in benefits at the end of the year.

The proposal includes increasing checks by an extra $400 a week — down from the initial $600 weekly boost included in the CARES Act, but up from the $300 in December’s stimulus program.

Biden’s plan would fund extra jobless benefits through at least September 2021, a six-month extension from the December aid package that boosted the maximum weekly unemployment insurance (UI) amount to 50 weeks from 39, an expiration that in many cases was set to happen as soon as March 14, 2021.

Individual workers who are still jobless after exhausting their weekly benefits and typically ineligible gig economy and contract workers would also be eligible for UI, the latter through the CARES Act-backed Pandemic Unemployment Assistance (PUA) program. More than 7.4 million workers are currently utilizing this special benefit, according to the Department of Labor’s most recent claims.

Hiking the federal minimum wage to $15 an hour

Biden is also slipping in plans to boost the federal minimum wage to $15 an hour from $7.25, where it’s been since July 2009. The incoming president also wants to end the tipped minimum wage that gives many hospitality and service-sector workers at least $2.13 an hour, as well as a sub-minimum wage system for individuals with disabilities.

A Congressional Budget Office (CBO) report found that a $15 minimum wage by 2025 would impact 27.3 million low-wage workers and pull 1.3 million people out of poverty, but at a cost: 1.3 million people could also be displaced from work. Raising the cost of labor could be expensive to implement at first, particularly for small businesses, the analysis found. That burden may also fall on the mom-and-pop firms and industries already struggling.

The other wallet-impacting provisions of the Biden administration’s plan include:

The ultimate question is whether President-elect Biden can secure enough votes for the relief package’s passage. Democrats hold a more powerful legislative edge after the Georgia Senate run-off elections, with Vice President-elect Kamala Harris holding a key potential tiebreaker vote in the chamber’s 50-50 split. But even just one vote could derail Biden’s wide-ranging proposal, though Trump’s support for sending $2,000 relief checks might be a key driver in converting some Republicans’ opposition.

If the package is passed, the Treasury Department and Internal Revenue Service would likely begin distributing stimulus checks in a matter of days. Funds sent through direct deposit would be the fastest to deliver, while mailed checks and debit cards could take three to four weeks to reach recipients once they’re sent, according to the IRS’ latest estimates.

“The emergency relief framework announced by the incoming Biden-Harris administration tonight is the right approach,” House Speaker Nancy Pelosi and Senate Minority Leader Chuck Schumer vowed in a joint statement after Biden’s announcement. “We will get right to work to turn President-elect Biden’s vision into legislation that will pass both chambers and be signed into law.”

AGF Investments’ chief U.S. policy strategist Greg Valliere foresees push back particularly over a provision that would send $350 billion in aid to state and local governments, but said it’s realistic to expect that Biden can get at least $1.5 trillion worth of his plan passed by mid-February, “which ain’t bad,” he says.

Hiking minimum wage could also prove to be a barrier. “While Biden is signaling his preference for passage of the legislation on a bipartisan basis, it remains to be seen whether there will be sufficient support for a measure of this size, as well as the long neglected proposed increase in the federal minimum wage to $15 an hour,” says Mark Hamrick, Bankrate’s senior economic analyst. “Years ago, the minimum wage was not seen as divisive. Indeed, many states and localities have since taken it upon themselves to boost their own minimums in the wake of action in Washington, many of which are going into effect this year.”

In the meantime, Americans should ask for help if they need it. Work with any lenders or financial firms you regularly pay a bill to to see if you can work out a forbearance plan. Meanwhile, cut back on expenses as much as possible for the sake of propping up your emergency fund.

“Biden spoke about the need to build a bridge to the other side,” Hamrick says. “In the distance is the much hoped-for prospect of a rolling reopening of the economy after substantially more Americans receive vaccinations enabling increased consumer spending and other activities previously taken for granted.”