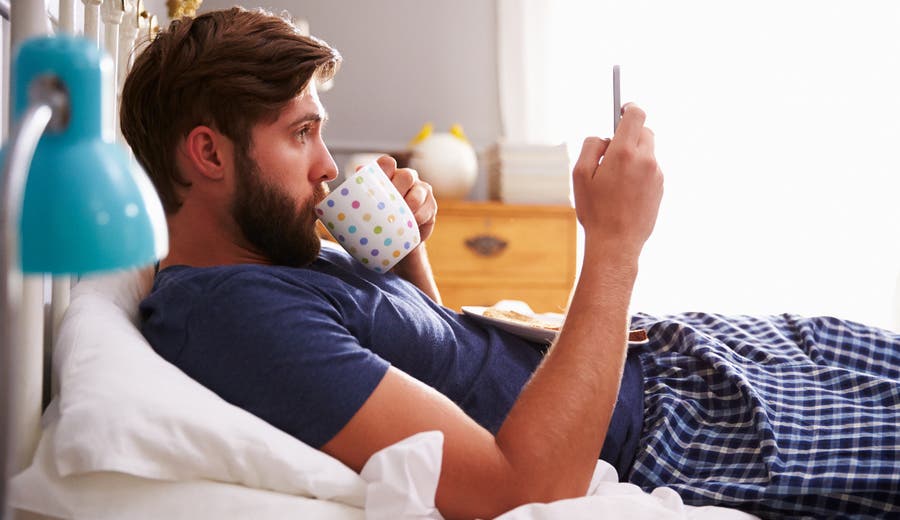 Digital banking was on an upswing well before the coronavirus outbreak. Deposits at popular online banks, Ally Bank and Marcus by Goldman Sachs, were soaring.

Now with Americans stuck at home, the digital banking trends are even more pronounced. Banking on the phone, while already popular, is now surging, contactless mobile payments are becoming more common and consumers are discovering alternative options from lesser-known digital brands. Chime, which claims 8 million customers, told Yahoo Finance it hit its largest enrollment in its history — opening more than 100,000 new checking accounts in a couple of days. Varo Money told Bankrate its metrics are up across the board. Even the newest challenger bank brand, HMBradley, is getting more customers than it initially expected.

“Businesses like ours and others are seeing a big jump in new customers coming through,” says Colin Walsh, founder and CEO at Varo Money, which is in the middle of becoming a bank, rather than just partnering with one. “This could be a real shift at a moment that has been pent up for a while now where customers were frustrated with poor service and frustrated with all these fees and charges. Suddenly, this crisis has forced people to really reevaluate.”

The appeal for a different kind of banking

Right now, comparing deposits at big banks to challenger banks is a bit like comparing the word count of “War and Peace” to that of a fortune cookie message. But if challenger banks become more broadly appealing amid the coronavirus shutdown, it could change the landscape of financial services in years to come. These digital alternatives offer basic banking services that are built on the premise of improving peoples’ financial outcomes. They defy traditional business models and entice customers with less-conventional perks designed to navigate them through challenging times.

Varo, which competes on yield and offers rarer features like the ability for customers to overdraw their account for free and find at-home jobs through its partner Steady, reports its applications have increased by roughly 70 percent in the last month and its deposits are up 300 percent since the beginning of the year.

Even one of the newest brands, which launched a hybrid high-yield savings and checking product amid the pandemic in late March, is getting a warmer reception than the startup anticipated.

HMBradley, which pays savers more when they deposit a higher percentage of their paycheck into their accounts, expected a younger audience when it opened its digital doors. In reality, the appeal is already broader. “We have seen people setting up Social Security deposits,”  says Zach Bruhnke, co-founder of HMBradley. “It’s not just millennials who walk in the door and are ready to try out anything new.”

Coronavirus as a catalyst for change

If challenger banks become more popular, it would mark a profound change. Consumers cling to their primary checking accounts and take years to drop them. And most consumers can’t resist going to the branch to become a customer. Even in 2020, 55 percent of consumers said they went to a branch to open a new bank account or product, according to J.D. Power data. In a pandemic, that option is all but removed. While banks are considered essential businesses, institutions nationwide have been slashing branch hours if not temporarily closing locations. Even if branches are open, plenty of people wouldn’t want to risk their health to open an account or deposit a check.

Bob Meara, a senior analyst at Celent, says the pandemic has caused many consumers, himself included, to behave in ways that defy our historical preferences. “Damn our preferences,” Meara says. “We can’t behave the way we used to. COVID-19 is a catalyst to accelerate changes that have been happening over the last decade or more.”

That isn’t across the board when it comes to winning over new customers, however. As consumers shelter at home, regional banks have seen their account openings dramatically drop. In the week ending March 27, banks with the largest concentration in cities had acquisition declines of 60 percent, while other traditional banks’ declines were 25 percent, according to Novantas’ data analysis. For the third week in a row, checking account acquisition remains generally flat since then, the firm’s most recent data shows.

It’s not the right moment to stress sales, of course. But for consumers seeking a new account, they may feel more open to alternative brands that offer quick signup experiences, charge few or no fees and offer compelling features that cater to specific group’s needs. For example, Chime and Current recently made a big splash by advancing government stimulus funds early to thousands of their customers. While not everyone needs the cash quickly to pay for essentials, others living on the edge are depending on the source of income.

“They are the ones who are paycheck-to-paycheck and whose paycheck didn’t come,” says Adam Hadi, vice president of marketing at Current. “We’re in this crucial position in their lives and we’re in a position to make things a little bit better even if it is in a small way.”

As of April 13, Current said it had credited 16,595 accounts with stimulus payments, with about 45 percent of money already spent on items like food and sending money to friends and family.

The idea of building a better bank has been tested before. On repeat. After the financial crisis, neobanks like Simple and Moven, launched products to woo customers away from the big banks. But the path to profitability is formidable. Now, Simple is owned by a bank and Moven is closing its direct-to-consumer operations in the U.S. and recommending its existing customers sign up for Varo accounts instead.

It’s not easy now either. If there is an opportunity for a challenger bank to become mainstream in the months to come, it will come with plenty of risks amid a deeply troubled economy.

Challenger banks, which partner with traditional banks to hold deposits, often rely on the money they make when customers swipe their debit cards. “That is a significant risk right now,” says Stephen Greer, a senior analyst on the banking team at Celent. “As transactions are so suppressed, their ability to turn a profit is going to be significantly hampered.”

The conditions are different from the last recession, too: Banks aren’t the villains this time around and have been improving their digital experiences over the years, as well. Some even offer similar perks to the challenger banks’ latest and greatest. Citizens Bank of Edmond in Oklahoma, for instance, worked with Mark Cuban to whip up a plan to advance stimulus checks to consumers before the challenger banks made a buzz about it. Randolph-Brooks Federal Credit Union, for another, lets direct deposit members receive their paycheck or federal benefits up to two days faster.

It’s not as if banks are losing deposits either. Quite the opposite. Deposits are rising since the start of the year, according to statistics released by the Federal Reserve. Not all challenger banks are seeing customer growth either.

For now, there are obvious limits to challenger banks’ broader appeal. While the new guard has been expanding their product lines, they lack a full menu. You can’t get CDs or mortgages from the challenger banks — yet. There is even a running debate about the limitations of the products they offer: are consumers using challenger banks as their main account or just as a side piece to play with, not plop paychecks in.

The virus is changing the way more of us bank: Will it stick?

And yet, living through a quarantine and a probable deep recession that is already revealing itself will have ramifications. For now, many are unknowable. Only time will tell what companies endure and which ones flame out.

But it’s almost certain sheltering-in-place policies will expose cracks in the digital banking experience. While large banks support well-reviewed apps, plenty of banks across the country don’t and tech issues are inevitable regardless — when customers were trying to login to their accounts in recent weeks, apps broke down. Once the branch opens up again, many believe banks will have to pour more resources into the apps they support. But challenger banks believe it could mark a turning point for something bigger.

“This may be the year that you see a lot of people who probably would never have considered an online bank, seriously consider it,” HMBradley’s Brunhnke says. “I think we are going to change a lot of our habits. We are all looking at the world a little bit differently right now.”