When you’re traveling abroad, the last thing you want to worry about is money, so the first thing you need to do is spend a few minutes planning the smartest and best methods to pay for your adventure.

Be sure you research the specific place that you’re traveling to. Advice that’s likely to apply in Canada, Europe and Mexico, may not work in more exotic or remote destinations.

Here are the four best payment strategies to use when traveling internationally:

1) Pay with a no foreign-transaction fee credit card

Many cards add an extra fee to each transaction you make in a foreign currency. Typically the highest foreign transaction fees are around 3 percent. That can add up quickly if you’re charging dining, lodging and other expenses when traveling internationally. It’s easy to avoid this fee by having at least one credit card without foreign-transaction fees in your wallet.

A little more than half (52 out of 100) of credit cards in the 2018 CreditCards.com Credit Card Fee Survey had a foreign transaction fee. That number’s down from 77 out of 100 in the 2015 survey. But there’s still a lot of cards that have this fee. So it pays to choose the card you use abroad wisely.

Visa and Mastercard are far more widely accepted overseas than Discover and American Express, so if you are only going to take one card make sure it’s one you can use in the most places.

Some of the credit cards that don’t have a foreign-transaction fee, also don’t have an annual fee. But sometimes cards with annual fees may have more perks or earning potential when it comes to cash back, miles or points. So choose the card that best fits your spending and the perks or benefits you want in a credit card.

Keep in mind that in Europe, for instance, many merchants require chip and PIN transactions. Some transactions, such as at unattended transportation payment stations, may be rejected if your card doesn’t have a PIN.

Carrying large amounts of cash is far from ideal, and making lots of small transactions to get cash can get costly.

First, see if you can find a bank in the U.S. that doesn’t charge you a fee, or will reimburse your fee, for using an ATM abroad.

“I recommend checking to see if your bank is a member of a Global ATM Alliance which can help eliminate or reduce fees, and then just taking cash out in a local currency that way,” says Melanie Lieberman, travel editor at The Points Guy.

For instance, Bank of America is a part of the Global ATM Alliance with nine other banks in different countries. For instance, if you were traveling to Italy, you can go to the BNL D’Italia website to find an ATM. As a Bank of America customer, going to one of these ATMs would help you avoid the non-Bank of America ATM usage fee, which is $5 as well as the fee charged by the ATM.

As long as your ATM or debit card works abroad, this method can be a way to potentially get a more competitive exchange rate than you would at a U.S. currency exchange.

“Personally I wouldn’t bring any foreign currency with me unless I had some leftover from a previous trip,” Julian Kheel, senior analyst at The Points Guy. “I’ve never had an issue getting local currency from an ATM, even in China, so I’d save myself the exchange fees. However, if someone isn’t as comfortable with that as I am, they can certainly bring some local currency with them — they’ll just be paying extra for the privilege.”

It’s a good idea to let your bank know that you may be using your debit, ATM or credit card internationally. Some banks recommend you contact them before traveling, while others say there’s no need to. But generally, it’s better to take a few minutes and let your bank know to avoid problems away from home.

“I would recommend that travelers research their options upon arrival, notify their bank before departure, and make sure there are ATMs at the airport or that you’ve arranged transportation in advance,” Lieberman says. Bank branches in the U.S., a AAA location, a local currency exchange or the airport are potential options for obtaining foreign currency in the U.S. While these methods allow you the comfort of having foreign currency in your hand when you land, you’re likely to pay a premium for this convenience in fees and potentially unfavorable exchange rates.

If you use your credit card to withdraw cash at an ATM, you may face the following fees:

When using international ATMs, you’re better off withdrawing foreign currency and not selecting the option to have the currency debited from your bank account in U.S. dollars, Kheel says.

“This is called Dynamic Currency Conversion (DCC) and it’s a way for ATM owners to force a horrible currency conversion rate onto unsuspecting consumers,” Kheel says. “You’ll get a much better rate by choosing to have your account debited in the foreign currency and allowing your home bank to make the conversion instead.”

Generally, you’ll be asked if you want your withdrawal converted to U.S. dollars after entering your PIN in and requesting the amount you want to withdraw. But some machines may ask more than once. So select local currency every time you’re asked, Kheel says.

The same holds true if you’re making a purchase at a business abroad.

“If a merchant ever offers to do the conversion for you, say no,” says Ted Rossman, industry analyst at Bankrate.com. “Because their terms are not going to be as good in the vast, vast majority of cases.”

If you have extra foreign currency at the end of your trip, it may make sense to use it to partially pay for an expense that’s already been incurred, such as your hotel stay, says Connie L. Miller, VP of business development at Your Travel Center / Montecito Village Travel in Santa Barbara, California.

“Or other last day purchases with cash,” says Miller, who is a member of the American Society of Travel Advisors (ASTA). “I’m always sad to see people frantically buying trinkets in the airport just to use their foreign dollars.”

Depending on where you travel, you may be able to bypass foreign currency altogether. Some tourist attractions may accept U.S. dollars.

“That’s what I do every time I travel,” Kheel says. “I never bring anything but my credit cards, debit card and a few emergency bucks in U.S. cash, which I almost never use.”

When choosing to bring U.S. dollars, consider bringing crisp, new bills and also an assortment of bills. This range will give you the versatility to either tip or pay for larger purchases, if necessary.

Below are some locations where you can use U.S. dollars while traveling, according to Joni Wu, luxury travel advisor and an independent contract with LUXE Travel, who is a member of ASTA. 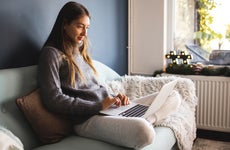 How to make an international money transfer 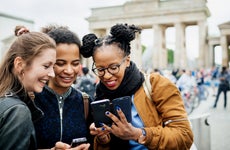 A guide to foreign transaction fees 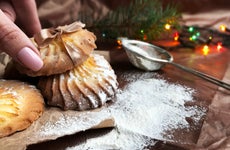 5 ways to get your finances ready for holiday spending