Homebuyers who buy a unit within a housing cooperative, or co-op for short, are purchasing shares in a corporation. When a buyer becomes a shareholder in a co-op, they are also granted a proprietary lease that gives them the legal right to occupy their particular unit within the co-op community.

What is a proprietary lease?

Also referred to as an occupancy agreement, a proprietary lease is what gives a co-op shareholder the right to occupy their home.

When you buy a co-op, you’re not purchasing what’s referred to as “real property.” The corporation owns the property — typically an apartment building or other residential development — and you own a stake in that corporation. In place of a deed, co-op owners are granted a set number of shares in the corporation, and a proprietary lease to occupy their unit.

The proprietary lease governs all aspects of the relationship between the co-op and each shareholder. It spells out the rights and privileges associated with ownership of the unit, including:

One of the things a proprietary lease governs is who is responsible for fixing problems within a co-op building. For example, if you own a co-op and a pipe bursts inside your bathroom wall, it is generally the co-op’s responsibility to open the wall and fix the pipe. This is different from owning a single-family home, in which you as the owner would be responsible for repairs.

However, the co-op will not necessarily repair or replace anything outside the wall once the pipe is fixed. It will only return the wall to a paintable surface. If you have expensive wallpaper, for example, you will likely have to pay to replace it.

How do proprietary leases work?

A proprietary lease is considered to be a form of residential lease like any other. As a result, the relationship between the co-op and its shareholders is governed by the laws applicable to residential leases: landlord-tenant law.

Of course, before you sign a proprietary lease you’ll need to have your financing in place. Co-op mortgages are slightly different from conventional mortgages, in which the property serves as collateral for the loan. With a cooperative mortgage, the shares in the co-op corporation and the proprietary lease are the collateral. They are typically not as valuable to the lender, because they can’t be sold as easily as actual property.

This is due to the way co-ops are purchased: It’s not as simple as just ponying up the asking price. Co-ops tend to be tight-knit communities, and before being allowed to buy into one, prospective buyers must be vetted by the co-op’s board of directors. They will review a buyer’s finances — and sometimes much more — as well as interview them before deciding whether to permit them to become a shareholder. Because the board needs to keep the corporation solvent, a certain financial threshold, usually including a minimum gross income, is required for prospective buyers. A co-op’s board members are typically volunteer shareholders who are voted on by their fellow shareholders to run the corporation, which places them in the unique legal position of being, in a sense, both landlords and tenants.

Co-ops vs. other types of real estate

Co-ops have several important differences from other types of real estate. The co-op board governs all, and can impose significant restrictions in their bylaws. For example, they can dictate whether or not you can sublet your unit, and who you can sell your property to.

A co-op and a condo may have very similar physical structures. Co-ops usually are cheaper to buy, but they aren’t eligible for low down payment mortgages. They may also have higher monthly fees, which usually include utilities.

The benefits of co-op living include a sense of community in which you know your neighbors (at least by sight) and know that the building is well-managed and everyone is following an agreed-upon set of rules. There won’t be an Airbnb next-door with strangers in and out all the time, for example, or an all-night dance party, or a marching band practicing upstairs. Co-op apartment buildings can feel safer than condo buildings for these reasons, especially in densely populated urban areas — like New York City, where co-ops are extremely common. 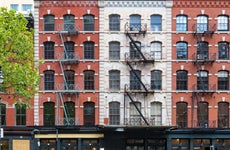 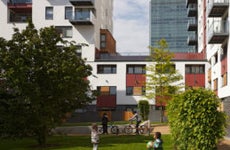 Co-ops and condos: The pros and cons of each 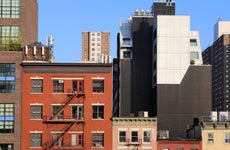 What is real estate? 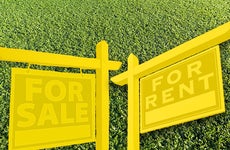 Renting vs. buying a home: Which is right for you?