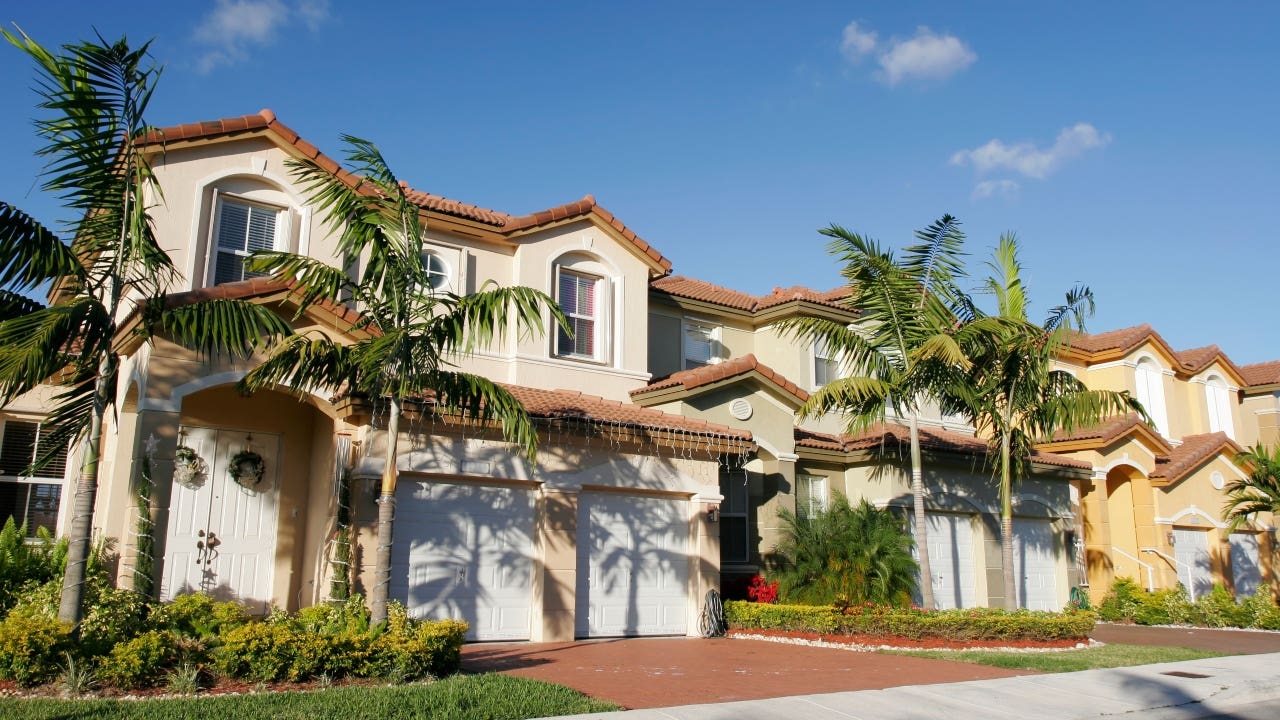 No matter where you live, dozens of architectural house styles exist, from the extravagant to the quaint to the modern. Some styles even mix several elements from a variety of classic and current-day designs.

“A home’s style first has to resonate on an emotional basis with the buyer,” says Deryl Patterson, an architect and president of Housing Design Matters in Jacksonville, Florida.

Patterson, for her part, can still recall visiting her aunt’s mid-century modern home in the early ‘60s.

“I remember looking at how austere her family room was,” Patterson says. “The most colorful thing in the whole room was the Kleenex box.”

Which style will suit you or your family best? Here’s a breakdown of the most popular house styles to consider. 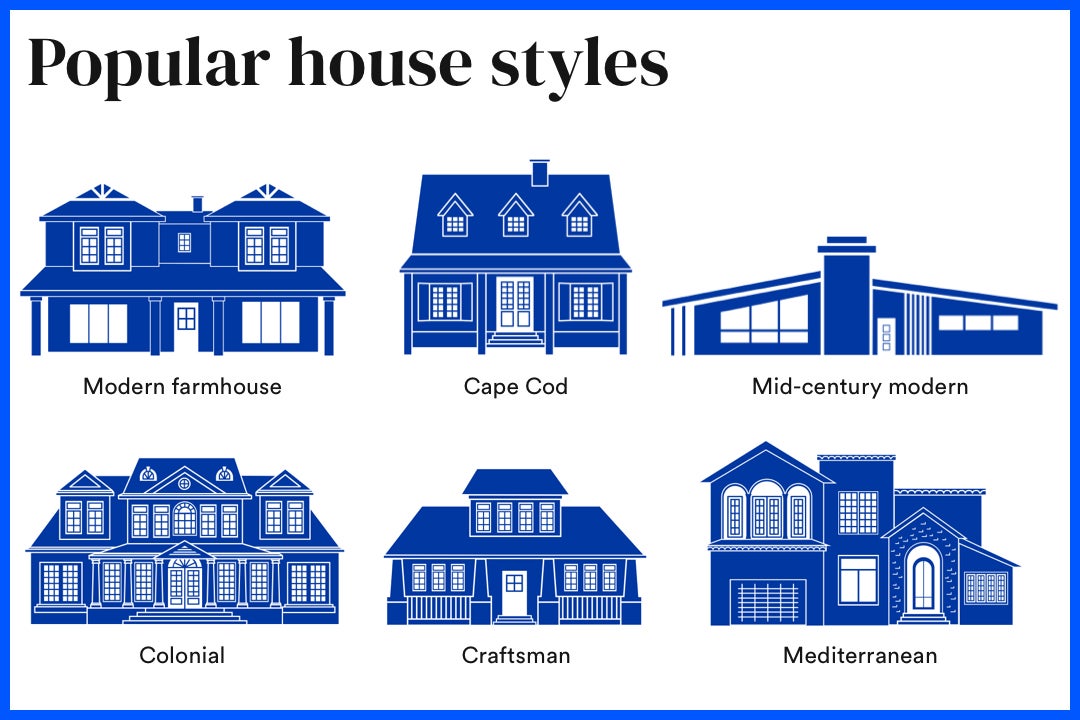 The modern farmhouse style reigns most popular in 42 states in the U.S., mainly in the Northwest, East and Southeast states, according to a recent survey of 5,000-plus Americans by Homes.com. Respondents said they were drawn to the modern farmhouse look because the style is “aesthetically pleasing but not boring.”

Other characteristics of this style include:

A Cape Cod-style home is a perfect starter home because of its simplicity, explains Michael Moritz, principal architect at Stonewater Architecture LLC in Summit, New Jersey.

“They have a cute feeling to them,” Moritz says.

The top qualities of a Cape Cod include:

The mid-century modern style came in second in the Homes.com survey, preferred primarily by those in the Midwest and in places like Arizona and Colorado. In mid-century modern homes today, you can expect to find polished granite floors or honed granite along with dark stained woodwork, Moritz says.

The look is best known for:

The British-inspired Colonial has been popular since settlers arrived in New England hundreds of years ago. Those who embrace the charm of yesteryear and a degree of symmetry might appreciate this style.

Some of the traits associated with a Colonial-style home are:

The Craftsman-style home, made famous by architect and furniture designer Gustav Stickley, became popular in the early 1900s. This style attracts buyers for its simple, non-ornate style.

Some features present in a Craftsman home include:

A Mediterranean-style home’s large windows beckon homeowners, especially in warmer weather climates. The vaulted ceilings inside lend a sense of luxury and spaciousness, along with its characteristic large patios and beautiful gardens.

Some of the Mediterranean style’s other distinctive qualities are: 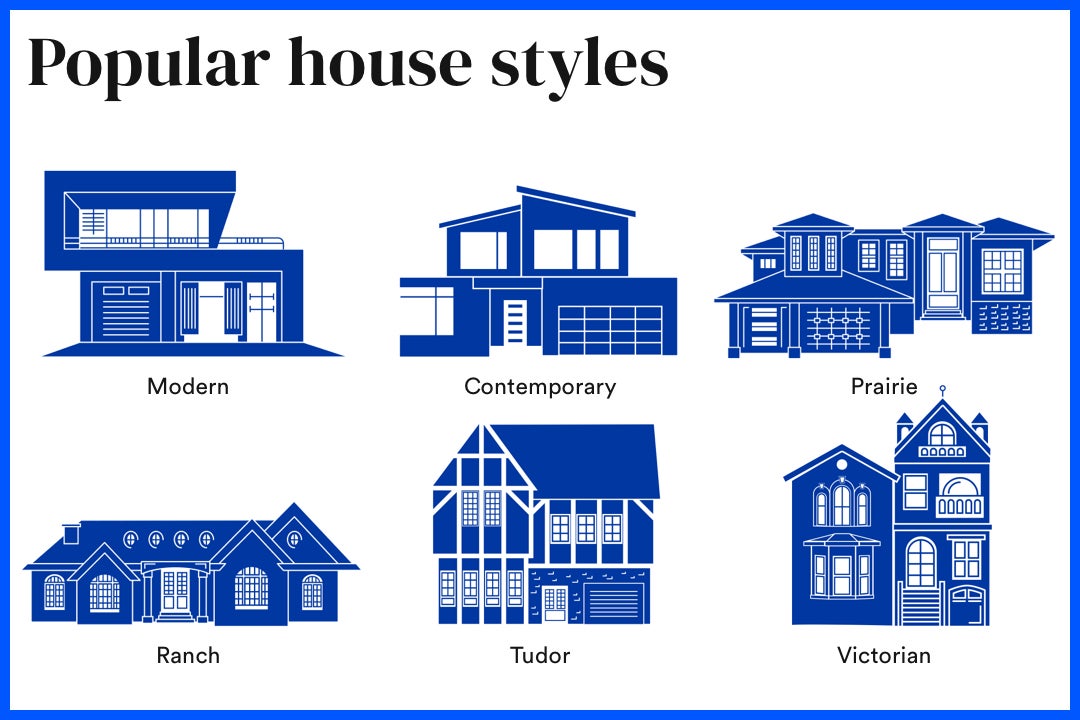 The essential features of a modern-style home vary depending on whether you live in a more urban or rural setting, but it typically includes a low-pitched or flat roof. This style tends to be attractive to trendsetters and people with lots of confidence, Patterson says.

The other qualities of a modern-style home might include:

The features of a contemporary-style home can also be fluid. Both Moritz and Patterson say it depends on the area you live in, and many times, the term contemporary is interplayed with modern to describe the style. Realtor Magazine describes contemporary as having “odd-sized and often tall windows” and a “lack of ornamentation.”

Contemporaries can also include:

The famous architect Frank Lloyd Wright popularized Prairie-style homes, which often include horizontal lines to mimic a flat setting. Those who don’t like segmented rooms and prefer an open floor plan might especially enjoy this style.

“We do a lot of work in Florida and Texas, and the ranch plan is king,” Patterson says.

Ranch-style homes appeal to those who want single-story living, and are ideal for those who don’t want to hear the pitter-patter of feet above them, Patterson says. Their construction usually allows for a wide open or semi-open floor plan, along with:

If you love the Gatsby-era of grandeur and expensive-looking millwork, then a Tudor-style home might be right for you, Moritz says. Some of this style’s details include:

Bright bay windows, ornamental chimneys and large porches give curb appeal to Victorian-style homes, Moritz says. These kinds of homes can appeal to anyone with a love of historical settings or woodwork.

Which is right for you?

Along the way, many architectural home styles have integrated different pieces of other styles, Patterson says, so it’s entirely possible to find a hybrid design that suits you well rather than a specific type.

One factor you should settle on, however, is whether or not you like symmetry or asymmetry, Patterson suggests. For instance, some homeowners prefer the front door centered between windows.

“That’s a very organized style and makes those who like it feel good, but others find that boring,” Patterson says. “There’s something out there for everyone.”