That’s the consensus from Bankrate’s First-Quarter Economic Indicator survey, which asked 21 economists from across the country where they see the Fed, interest rates and the broader economy heading in 2019.

Two-thirds of economists surveyed are predicting that the U.S. central bank will increase borrowing costs again this year, but their forecast for the 10-year Treasury yield – the benchmark for 30-year fixed mortgage rates –  averages at 3.04 percent, down from 3.44 percent in the prior quarter, the survey shows.

What caused the change of expectations? The same concerns that Fed officials have previously outlined. Global growth is slowing, while a U.S.-China trade deal is still up-in-the-air, hurting business and consumer confidence. Nearly 76 percent said these threats to the U.S. economy are tilted toward the downside, according to the survey.

“Even the Fed has admitted that risks are not balanced,” says Robert Brusca, chief economist at Fact and Opinion Economics and a former researcher at the Federal Reserve Bank of New York. “International organizations have cut their outlooks. The Bank of India just cut rates. The times, they are a changin’.”

For consumers, this means that carrying credit card debt is likely to get more expensive. But a stable Treasury yield indicates that mortgage rates will rise tepidly. 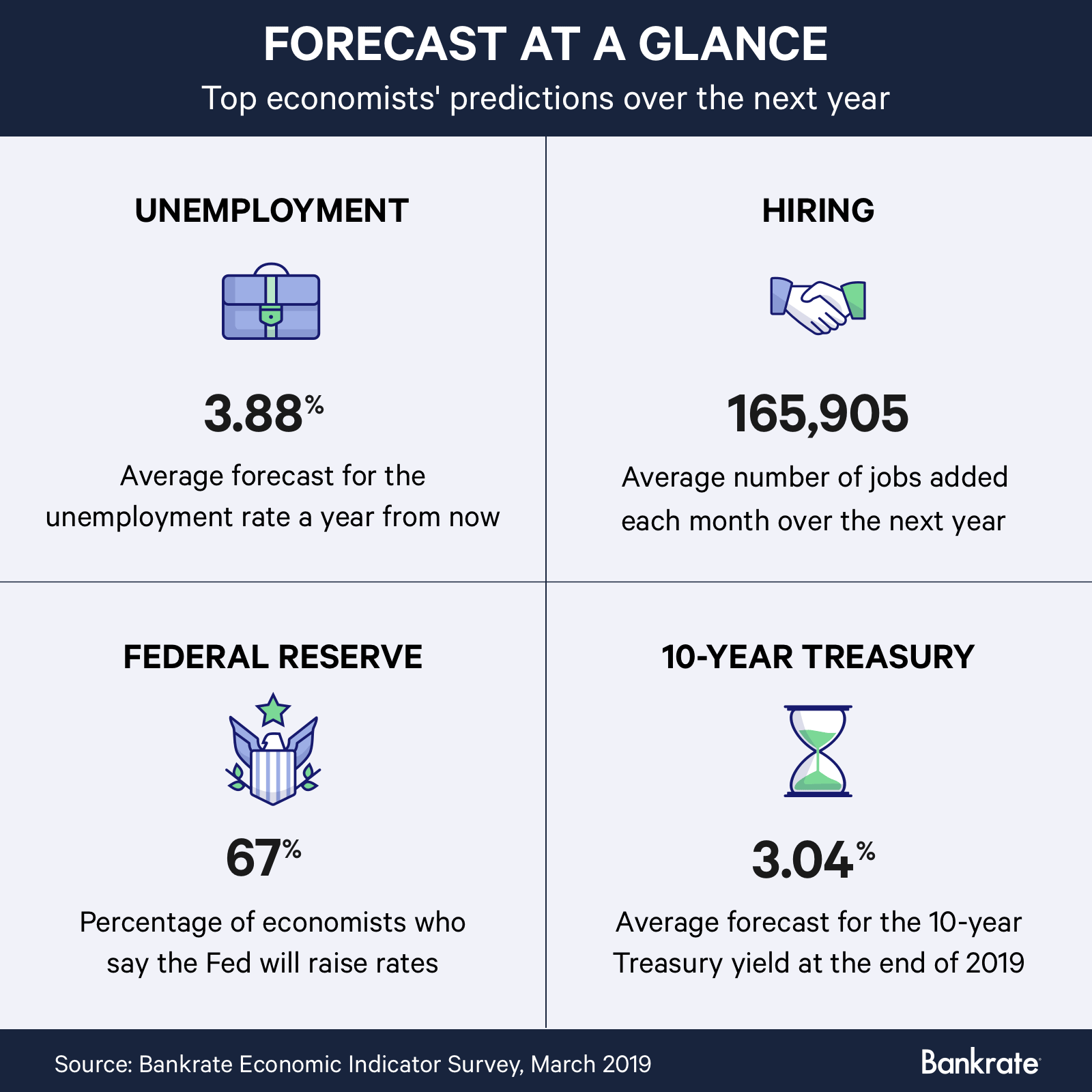 What will the Fed’s next move be?

Though two-thirds of economists surveyed for the indicator estimate that the U.S. central bank will sneak in additional rate hikes this year, the remainder (33 percent) believe rates will hold steady.

After voting unanimously at the January rate-setting meeting to keep borrowing costs unchanged in a range of 2.25 to 2.5 percent, Fed officials urged investors in their post-meeting statement that they’d be “patient” with further “adjustments” to the fed funds rate.

The tone shift has some investors now betting that that the Fed will cut rates, according to CME Group’s FedWatch tool. Even former Fed chair Janet Yellen said the Fed’s next move could just as likely be down as up.

But amid the global growth uncertainties, the U.S. economy still has some steam, economists in the survey noted.

The economy expanded by more than forecast during the fourth quarter, according to the Department of Commerce’s most recent gross domestic product report released Thursday. This brought President Donald Trump close to his 3 percent growth target for the year.

Meanwhile, the Fed’s preferred gauge of inflation – personal consumption expenditures – shows that prices have held just below the Fed’s target, the Department of Commerce also reported.

These factors have led economists to believe that rate cuts won’t happen this year, according to the survey.

Lawrence Yun, chief economist at the National Association of Realtors, says the current backdrop warrants a patient approach to adjustments. “Very low inflation and steady economic growth means no need to nudge the economy one way or the other,” Yun says.

Bernard Markstein, president and chief economist at Markstein Advisors, on the other hand, is one of 14 economists who think that the economy’s current performance will warrant additional hikes at some point this year.

“The economy is still strong enough to absorb one or two more increases,” Markstein says. “The Fed is likely to raise the fed funds rate at least once around the middle of the year and possibly a second increase in the fall. That should be the end of rate increases unless the economy shows greater strength than I am forecasting.”

What will the 10-year Treasury yield be a year from now?

Mortgage rates likely won’t take off this year, if Bankrate’s survey is any indication. Nearly 95 percent of respondents said the 10-year Treasury yield will hold below 3.5 percent, a sharp drop from last quarter’s results of 38 percent.

The survey showed only one cluster of agreement, with a third of economists predicting that the 10-year Treasury yield will be between 3 and 3.1 percent. Only one economist expects the rate to reach 3.5 percent, according to the survey.

The average of the 21 responses forecasts a rate of 3.04 percent.

A possible reason for this spread: Experts are still eyeing those global concerns. Only one economist said risks are evenly balanced, while 76 percent said economic risks are tilted toward the downside, according to the survey.

The report, however, did show that optimism is slowly growing. Nearly 19 percent of those surveyed said the risks are tilted toward the upside, compared with none in the prior quarter.

That’s because some of the uncertainties clouding the outlook are likely to become clearer in the coming weeks, says Dec Mullarkey, managing director of Sun Life Investment Management.

“Chinese stimulus will have kicked in, trade disruptions should be closer to resolution, the U.K.’s Brexit path should be clearer and European growth should improve as demand stabilizes,” Mullarkey says. “The second half of the year should see risks mitigate and global sentiment improve.”

What will job growth and the unemployment rate look like a year from now?

Amid the uncertainty, one aspect of the U.S. economy continues to fire on all cylinders: the job market. Employers added 304,000 new positions in January, the labor market has now grown for 100-straight months and the unemployment rate is near a 50-year low of 4 percent, according to the Department of Labor.

Employers continue to echo that there aren’t enough workers to fill vacant positions, indicating that the labor market is tight. Fed Chairman Jerome Powell said during his semiannual testimony to Congress that the labor force still likely has some slack, which could spur more job creation by encouraging more people to get back to work.

This largely aligns with what economists are expecting, according to Bankrate’s indicator.

While job growth above 300,000 may not be likely, the average forecast says the economy will add 165,905 new positions each month, consistent with the previous three surveys. The unemployment rate is also expected to hold at historic levels, with the average forecast calling for 3.88 percent.

What this means for you: Boost savings and reduce debt

The year is shaping up to be relatively healthy, and the economy looks poised to reach its longest-expansion on record this year, if Bankrate’s survey is any indication. Take advantage of continued strength in the job market by boosting your savings contributions, says Greg McBride, Bankrate’s chief financial analyst.

“Make hay while the sun shines and ramp up contributions to a high-yielding online savings account, so you’ll be better prepared whenever an economic downturn should materialize,” McBride says. “With the job market staying strong, this will continue to be an environment where people are working and earning more.”

At the same time, expectations for the benchmark 10-year Treasury yield have fallen off dramatically amid a period of economic uncertainty. Those shopping around for a home loan should compare mortgage lenders to make sure you’re getting the best rate for your situation.

“If the economy stays strong, mortgage rates will rise,” McBride says. “But the prevailing uncertainty about economic growth and trade disputes will keep a lid on the increases.”

Meanwhile, debt is still likely to get more expensive, as the Fed is widely expected to raise rates again. Rate hikes are typically good for savers, leading to higher yields on savings accounts and certificates of deposit, but bad for those carrying credit card debt. A rate hike would mean a higher annual percentage yield.

The bottom line: Consumers and borrowers should forge ahead with healthy financial habits. 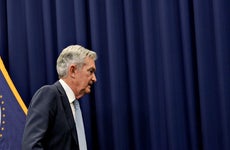 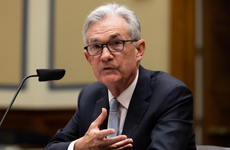