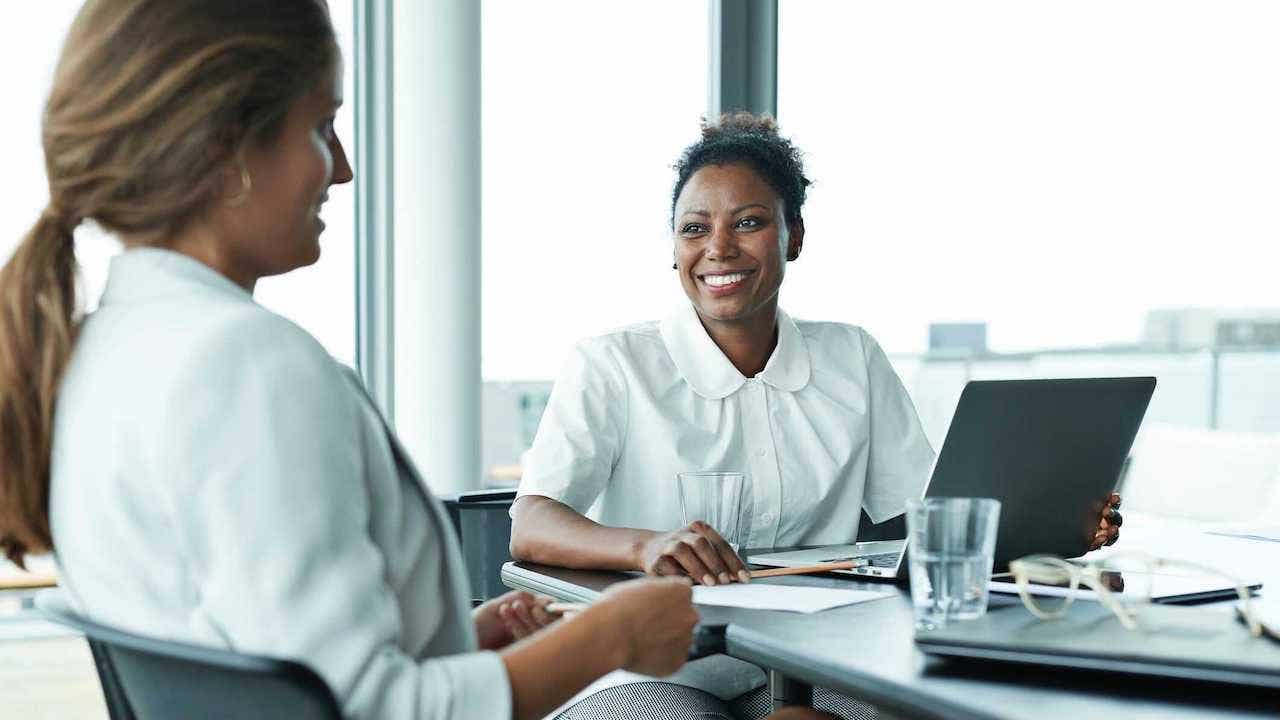 With the economy and job market as they are, many feel lucky just to have a place to call work and a steady paycheck. But if you’ve been working hard and picking up new responsibilities and haven’t yet seen a bump in your paycheck, it may be a good time to ask for a raise.

Sure, asking for more money can be risky when the economy and the job market are struggling — you don’t want to appear demanding when your company may be hurting. But good employees deserve to be paid based on their value to the company and there are ways to talk to your boss about pay without rocking the boat.

Here are some tips for asking for a raise, along with alternatives if you’re unsuccessful.

Know the state of the company

“Be cognizant of where the company is financially,” says Dr. Roshawnna Novellus, CEO of EnrichHER. “If you have access to financial statements, use it, and prove you’re aware of the situation and that your proposed raise fits the current budget.”

If it’s well known that your company is financially struggling, then it’s probably not the best time to ask for a raise. However, if you know that the company is in a secure financial position — and you’ve contributed to that — then highlight your contributions and the value they’ve added to the company’s success.

“If you haven’t done your homework and proved your successes with hard metrics, it’s probably not the right time [to ask for a raise],” Novellus says.

Start the conversation before reviews

Make your desire for a raise clear before your next performance review rolls around. By starting the conversation early, your manager will be aware of your professional goals and will hopefully help you reach them.

Ashley Stahl, a career expert at SoFi, suggests setting up a meeting with your manager at the start of any quarter. In this meeting, you should discuss your salary and the potential for a raise.

“Ask for a list of achievements that would really exceed his or her expectations,” Stahl says. “This way, when the performance review arrives, you have already set things in motion and crossed achievements off a list of actions they requested. If you wait, it’s possible the budget will already be set in stone for the year, without your raise included.”

When it comes to asking for a raise, there’s one major thing everyone should do beforehand: Come prepared with information and performance metrics to justify your ask.

You have to be your biggest cheerleader for career advancement. Novellus suggests keeping track of your performance metrics against the company’s central key performance indicators — combine quantifiable metrics with more qualitative data like letters of support from clients that speak to your abilities and relationships.

“This combination of data will prove that you are both well-rounded and good at your job,” Novellus says.

SoFi’s Stahl recommends spending time creating a list of the projects and results you have completed that link your work to an increase in revenue somehow.

“Make sure to outline quantitative results in your conversation, because no matter what your role is, you are always contributing to the bottom line of the organization,” she says.

It’s a strategy that works.

How one woman got a 10 percent raise

Novellus put this advice into action early in her career and was able to secure a 10 percent raise as a result.

At the time, she was program manager at a financial company and had access to the billing rates of everyone who worked on any of her projects. This access gave her insight into what others were making and she made the upsetting discovery that she was making significantly less than her white male counterparts.

However, she knew that this fact alone wasn’t enough to warrant a raise. So that’s when she started to keep track of her work with qualitative metrics like how many clients renewed contracts with her and other examples of her success in the role.

Prior to her meeting with management, she compiled all of this data along with letters of support from clients. After presenting  the metrics and letters, she asked for a 20 percent raise and was met in the middle with a 10 percent raise. While she may not have gotten the raise she had originally asked for, she still managed to secure a significant raise by coming prepared and being knowledgeable of the performance metrics.

Novellus’ experience with asking for a raise exemplifies Stahl’s advice of keeping a list of ongoing projects and results to make your case. The important thing to remember, however, is that this shouldn’t just be a list of things you’ve done or worked on. Instead, focus on the results of your work and how it has benefited the company.

Don’t limit yourself to base salary adjustments

When you think about asking for a raise, you’re probably hoping for a base salary adjustment — but don’t get stuck on that number alone.

“Think about your overall quality of life, particularly if the core values of your organization mention things like health and mindfulness or work/life balance,” Novellus says. “In that case, it’s more than reasonable to bring a request to the table that includes fitness memberships, access to doctors, physical therapists, or psychiatrists, or childcare vouchers/reimbursements, depending on what your needs are and what your organization already provides.”

A salary isn’t the only thing that can be negotiated; think about the other aspects of your life that could use a raise.

Don’t be afraid to ask for a raise

The idea of asking for a raise can be scary in itself, but don’t let that hold you back from actually asking for it because the odds of you getting one are more in your favor than you may have thought.

In fact, according to a survey by career site PayScale, only 37 percent of workers have asked for a raise. And yet, 70 percent of those who did ask for a raise, received one.

This just goes to show that it truly never hurts to try. The worst thing that could happen is that you’re met with a “no,” “not right now,” or a smaller raise than you had originally asked for.

What not to do 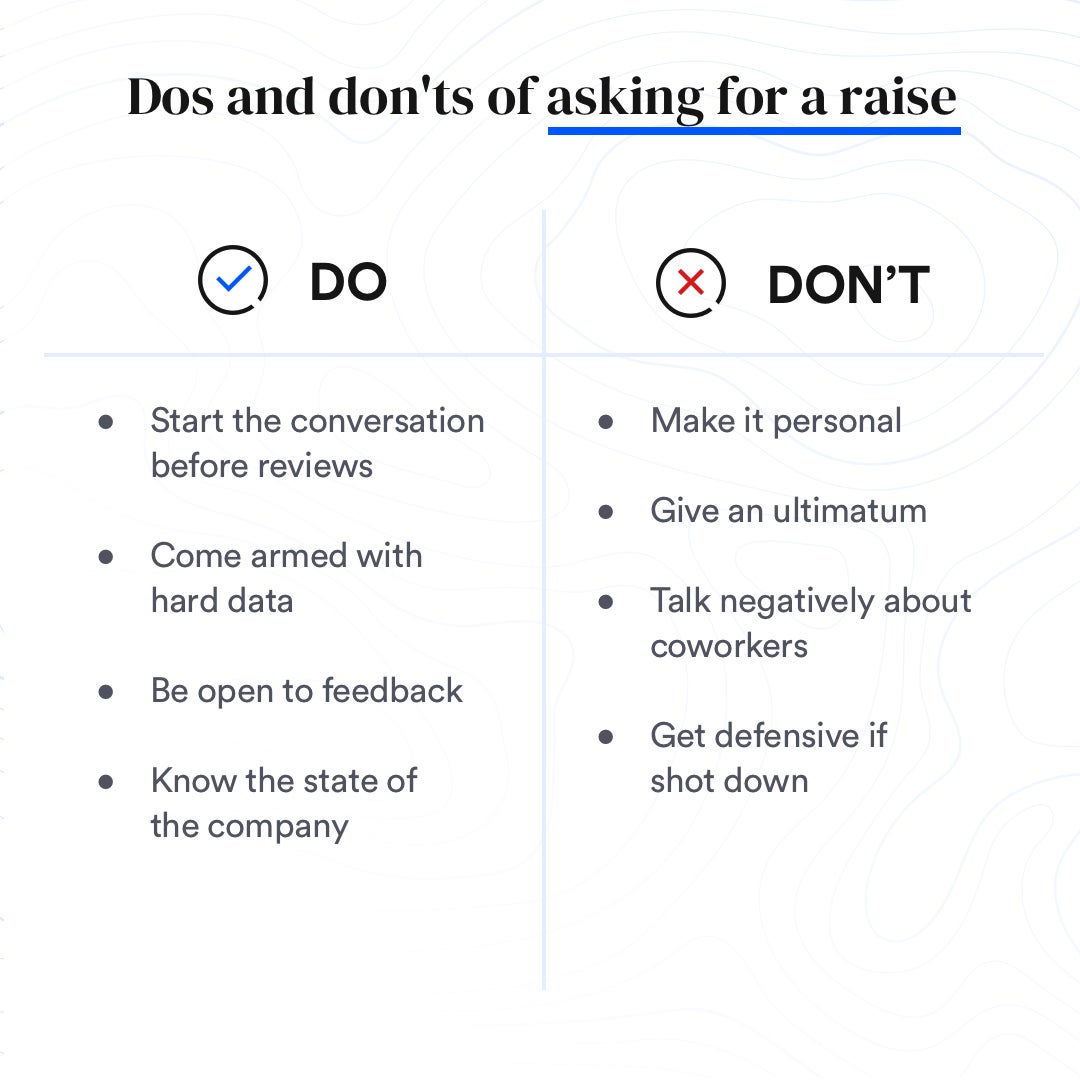 While it doesn’t hurt to ask, it does depend on how you ask.

“Leave your personal expenses and needs out of the conversation,” SoFi’s Stahl says. “Your paycheck is only about your contribution to the workplace, and the ROI you bring.”

This can be a tough topic to avoid, especially if you are struggling during this tough economic time, but try to focus on the contributions you’ve made and how they’ve added value to your company.

By coming prepared with hard data to drive the conversation, Stahl says you will avoid making things personal and the decision to give you a raise becomes an easier one.

Finally, avoid negative comments regarding other employees or giving ultimatums as these types of comments will undoubtedly put a bad taste in your manager’s mouth.

What if you get shot down?

Sometimes your best effort isn’t enough to net you the pay bump you deserve. If this happens, there are a few things you can do.

First, be receptive to feedback and don’t get defensive. A “no” could just mean “not right now.” Instead, ask what you can do to improve your chances for a raise between now and your next performance review or other agreed upon time, Stahl recommends.

If your boss is willing to give you a list of objectives to work on, you’ll be better positioned the next time you discuss compensation.

“Your worth is not wrapped up in your job or the money you earn,” EnrichHER’s Novellus says. “If you receive honest constructive criticism in this meeting, try to incorporate it as best you can in your future performance.”