If you’re looking to reduce your out-of-pocket college costs, scholarships and grants should be your first option. Unlike federal and private student loans, they’re both a type of gift aid, meaning you don’t have to pay them back. Here’s what to know.

Scholarships and grants are a type of gift aid (money that doesn’t have to be repaid). They’re the second-largest source of financial aid, covering over 25 percent of students’ college costs.

Scholarships and grants are a type of gift aid (money that doesn’t have to be repaid). They’re the second-largest source of financial aid, covering over 25 percent of students’ college costs.

Scholarships and grants by recipient

When it comes to scholarships and grants, aid is distributed almost evenly across students from different backgrounds, as shown in the chart below. The most notable difference is between Black and Asian students. According to the National Center for Education Statistics’ most recent figures, 88 percent of Black students received some form of gift aid in 2015-16, while only 66 percent of Asian students received some form of gift aid.

Scholarships and grants by household income and type of institution

Besides that, students with a household income of $48,000 or less tend to get substantially more gift aid at both public and private universities, as shown below.

How to apply for scholarships

You can also get scholarships by meeting certain criteria, such as majoring in a certain field, being a first-generation student or being a member of the LGBTQ+ community. Likewise, there are scholarships for women, Latino students and many other groups.

Both forms help your school and other entities determine whether or not to give you additional funding based on your financial circumstances and needs.

Merit-based scholarships, however, require you to do more digging, as private entities and businesses often provide them. You can find hundreds of these using scholarship search engines such as Scholarships.com and Fastweb. Although requirements may vary, they usually include:

Although this can be time-consuming, it’s worth it. You could secure thousands of dollars worth of aid just by filling out a form and tracking deadlines.

How to apply for grants

Applying for grants is usually fairly easy. Most of them are need-based, meaning that they’re awarded based on your economic need, and you can get them from the federal, state and local governments, as well as from your university.

The most famous and generous grant available is the Pell Grant, which currently has a maximum award of $6,895 for the 2022-23 academic year. To apply for grants, you typically need only complete the FAFSA and the CSS Profile. Not all schools use the CSS Profile, so check first.

Both forms will ask questions regarding your family size, living situation and household income to determine your eligibility.

What to do if your financial aid package falls short

As skyrocketing inflation makes everything more expensive and college tuition prices rise, scholarships and grants may not cover your costs. Federal student loans may not be enough to make up the difference.

If your financial aid package falls short, you can use private student loans to bridge the gap. However, unlike federal student loans, private student loans are issued based on credit. It’s important to shop around for lenders and compare quotes before you sign on the dotted line, to ensure you’re getting the best terms and interest rates available for your situation.

If poor credit keeps you from accessing the best rates, you aren’t stuck with a high interest rate forever. You can always refinance your private student loans once your financial situation and credit have improved. Refinancing may make your debt more manageable and save you money on interest.

SHARE:
Written by Heidi Rivera
Read more from Heidi
Heidi Rivera is a student loans writer for Bankrate. She began her journey in the personal finance space in 2018 and is passionate about collecting data and creating content around higher education and student loans.
Edited by
Helen Wilbers
Edited by Helen Wilbers
Helen Wilbers has been editing for Bankrate since late 2022. He values clear reporting that helps readers confidently land deals and make the best choices for their finances.
Helen Wilbers 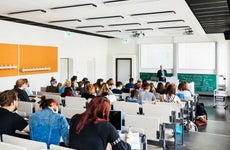 Scholarships for Students Facts and Statistics 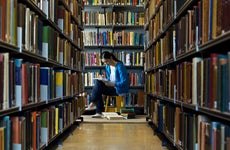 Paying for college when you have no money in savings 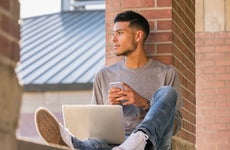 The cost of attending college as a DACA student 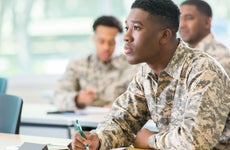 Tuition waivers: What to know and how to qualify