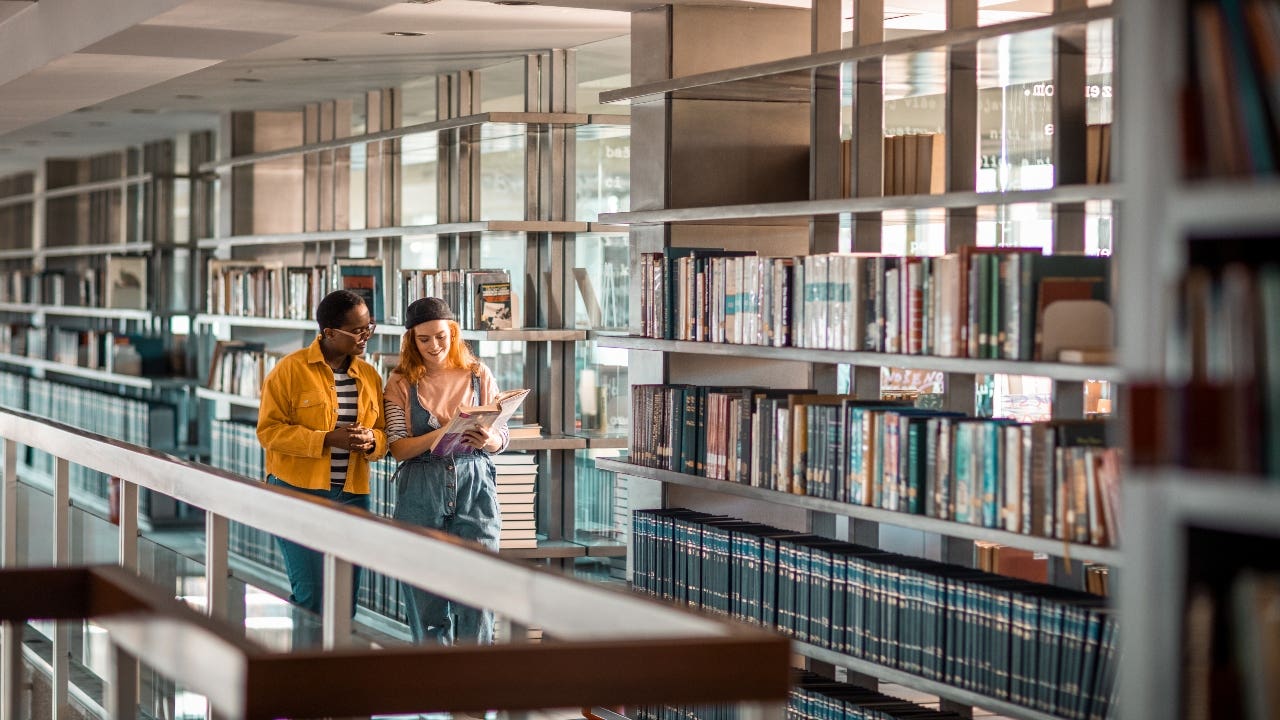 Americans collectively owe more than $1.74 trillion in student loan debt — a number that keeps rising as tuition costs continue to increase. Not only that, but a recent Bankrate survey found that 70 percent of millennial and Gen Z borrowers have put off major milestones, like saving money for retirement, paying off high-interest debt and buying a house, because of their student loans.

The current state of student loans is the result of many years of policy and legislation. Here’s a complete timeline of what led to the creation of student loans, as well as their evolution throughout the years and what you can expect from them moving forward. 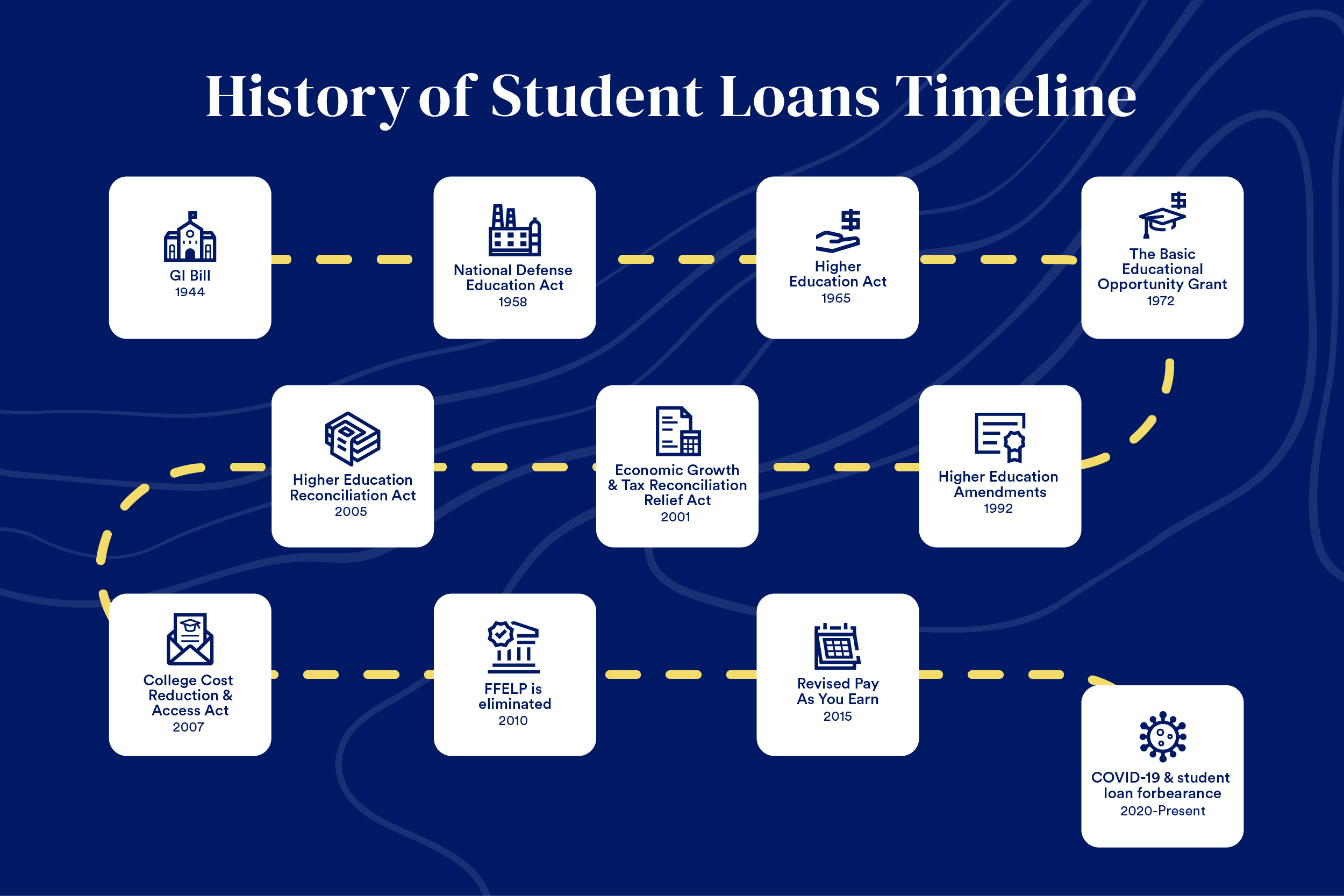 The process of getting a student loan has changed over the decades, as have some of the associated risks and benefits. Here’s what to know.

In the summer of 1944, President Franklin D. Roosevelt signed the Servicemen’s Readjustment Act in an effort to help World War II veterans transition back into society. This law, commonly known as the GI Bill, made it easier for veterans and service members to go to college or vocational school by significantly reducing their tuition costs, among other things. To this day, service members can receive financial assistance through the GI Bill.

World War II sparked a fierce competition between the U.S. and Russia, particularly when the latter launched the world’s first space satellite, Sputnik, in 1957. Naturally, this caused concerns among Americans that they were falling behind — technologically speaking.

In an effort to make higher education more affordable and amp up the system to meet the nation’s technological and defense needs, President Eisenhower signed the National Defense Education Act in 1958. Among its provisions, this law offered grants, scholarships and student loans to those majoring in engineering, math, education, science and foreign languages.

During his presidency, Lyndon Johnson urged Congress to enact a law that made postsecondary education more accessible to both low- and middle-income families, stressing that education was “no longer a luxury, but a necessity.”

Congress listened, and in November of 1965, the Higher Education Act became official. This law significantly increased federal funds for colleges and universities and created numerous scholarships and grants for students with “considerable” financial need.

Created in 1972, the Basic Educational Opportunity Grant was designed to reduce the cost of college for low-income students pursuing their first undergraduate degree. Today, this grant is known as the Pell Grant, after it was renamed in 1980 in honor of Democratic U.S. Senator Clairborne Pell of Rhode Island, who was the driving force behind its approval.

The Pell Grant is considered a fundamental part of students’ financial aid package, with a maximum award of $6,895 for the 2022-23 academic year.

A revision to the Higher Education Act in 1992 resulted in a significant expansion of the federal student loan program. Up until this point, all federal loans were subsidized, meaning that the government absorbed the interest while students were in school.

With the Higher Education Amendments of 1992, the federal government began to offer unsubsidized loans to all students — regardless of their financial need — as long as they were enrolled at least half time at a qualifying institution.

These amendments also created the Free Application for Federal Student Aid, or FAFSA, and a pilot program for income-sensitive repayment.

In his presidential campaign in 2000, President George W. Bush promised a series of tax cuts to stimulate the American economy and put an end to the recession. This was materialized in June of 2001 when he signed the Economic Growth and Tax Reconciliation Act.

Among other things, this law eliminated the time limit for how long borrowers could deduct student loan interest from their taxes. The limit on how much interest could be deducted was also raised to $2,500, where it still sits today.

During his second term, President George W. Bush signed yet another law to help student loan borrowers. With the Higher Education Reconciliation Act, graduate students became eligible for PLUS loans. These loans have higher interest rates than other federal loans for graduate school, but they do allow students to borrow up to the total cost of attendance.

The act pledged to reduce interest rates over a five-year period and increased the Pell Grant program’s funding by $11.4 billion. In addition, both the Income-Based Repayment Program and the Public Service Loan Forgiveness Program (PSLF) were born to make student loan repayment more manageable.

The Department of Education made changes in 2015 to the Pay As You Earn repayment plan to include all borrowers, not just those who took out loans on or after Oct. 1, 2007.

These changes resulted in the creation of the Revised Pay As You Earn repayment plan, which caps your monthly payments at 10 percent of your discretionary income.

In 2020, the world got hit by the COVID-19 pandemic, which led to massive layoffs and a recession. As a response, President Trump signed the CARES Act on March 27, 2020. Among other provisions, this law granted temporary relief to borrowers by placing all federal student loans on administrative forbearance, interest-free.

Although payments were scheduled to restart that same year, borrowers got six more extensions, with the latest one approved by President Joe Biden back in April and set to expire on Aug. 31, 2022.

The Biden administration has also made substantial changes during the past year to federal programs to bring more borrowers closer to forgiveness. These include expanding borrower defense, removing taxes from any forgiven balances until 2025, automatically waiving federal student loan interest for service members and automatic forgiving debt for disabled borrowers.

The chart below shows how the nation’s student loan balance has grown over the last decade, going from $1.05 trillion in 2012 to nearly $1.75 trillion today.

The future of student loans

While on his presidential campaign, Biden promised to cancel up to $10,000 in federal student loans for each borrower. Sen. Elizabeth Warren, Senate Majority Leader Chuck Schumer and Congresswoman Ayanna Pressley have also advocated for student loan forgiveness in recent years, insisting that Biden can and should forgive at least $50,000 in federal student debt per borrower. In addition, the administration has been working on updating some of its income-driven repayment plans to correct errors in the system and potentially introduce new plans.

But these proposals, and others, are still up in the air.

“If the Administration tries to waive loan obligations, there will be a court challenge to the Administration’s authority to do so and there appears to be wide opposition in Congress to such an activity,” says Scott MacDonald, founder of the MacDonald Community Scholarship Program and author of “Education Without Debt: Giving Back and Paying it Forward.”

Stuart Siegel, financial aid specialist and founder of FAFSAssist, agrees with MacDonald. “The fact of the matter is that until the Biden administration makes their position public, anything is possible,” he says. “But I’m thinking there will be legal challenges that could delay repayment from starting up.”

In the meantime, Siegel encourages borrowers to explore these options to make their payments more manageable:

Student loans have come a long way since they first became available in the 1950s. Although some changes are happening to make the system more efficient, there’s still a lot of work to be done. Until then, the best thing you can do is explore your options so you can choose the one that best suits your financial circumstances and needs.