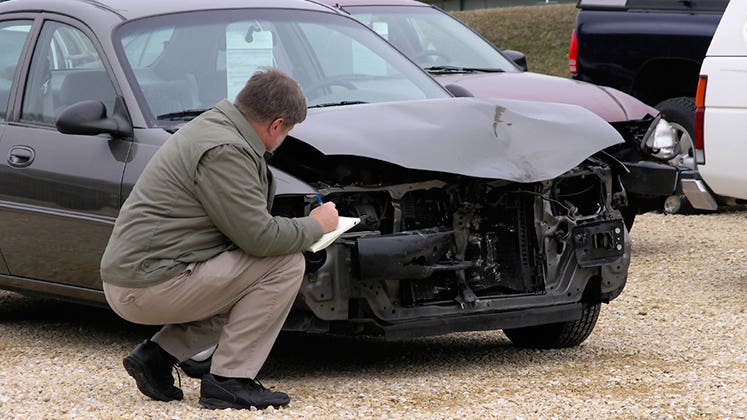 Ever wonder what it’s like to be an insurance claims adjuster? We asked New York-based Scott Congiusti, assistant vice president of claims for HUB International insurance brokerage, to take us behind the scenes of a claims adjuster’s life.

A lot in common with being a cop

I was working as a police officer in New Jersey when I fractured my back in an off-duty accident. During my recovery, I started looking at what I could do in the private sector and wound up hiring on with Allstate, handling automobile claims. It was a good mental fit because I like figuring things out and I function best under high stress. A mundane, sedentary job would drive me nuts. Strangely enough, a lot of adjusters have a criminal justice degree; they just might not like shift work or carrying a gun.

Every day starts with the hotline

You come in every day and you have a list of automobile claims assigned to you from the 24-hour hotline. If I was lucky, I’d have two or three, but it was usually more. Still, I had more information from the hotline than I did in law enforcement, where somebody would call and say, “There’s a fight in progress,” but you didn’t know what caused it or how many were involved.

Absolutely the most important tool is a digital camera, cellphone or tablet to capture photos. You also need a lengthy tape measure, and maybe a moisture meter to detect standing water behind walls or under floors. In a catastrophe, you need protective gear and a ladder in case you have to climb on a roof. And regardless of technology, I still carry a notepad, because depending on where you are, it’s not always practical to carry a $2,000 tablet around with you.

There are definitely differences between working for a publicly traded, stock-held company and (and working for) a mutual company where the clients own the company. Stock-owned companies are a little more black and white on procedures, because they’re large and have thousands of adjusters. With mutuals, the policyholder is also a shareholder, so they tend to be a little more flexible. I wouldn’t say one is better or worse than the other. They both get to the same place, just from slightly different angles.

How are we perceived by the customer? Typically, you’re the answer to their call for help. With an automobile claim, they might need a rental car or body-shop estimate, so it’s more immediate, whereas with someone’s home it is very, very personal — you’re going to be in their house. But at the end of the day, you’re seen in this positive light as the person who’s going to make their life good again.

The rarer the claim, the greater the appeal

The one claim no adjuster can ever fix

On the auto side, absolutely the worst claims are fatalities. I’ve dealt with quite a few of those. There’s nothing you can say or do to make it better. I can pay them $10 million on a policy or buy them a new car or build them a new house, but it’s never going to replace the person who passed away. It’s never going to fix it, and you’re often left with this sense that you didn’t do enough, because you can’t.

Toughest part about being an adjuster?

The hardest part of my job? That’s easy: living on call. For the last eight years of my career, my cellphone has only been off when my two children were born and anytime I’m on an airplane. Otherwise it’s either on silent or just on, period. My wife’s used to seeing my phone ring at 2 or 3 in the morning and me waking up and going to get my laptop. It seems to be a reoccurrence every single Christmas Eve.

By now, I’m used to it; my family’s used to it. But for somebody coming from a typical 9-to-5 job, it can be very hard to adjust to. The trade-off for me is, I don’t work shifts anymore. Being awakened at 2 in the morning for half an hour is so much better than working midnight to 8 and trying to sleep when everybody else is outside enjoying the sunshine.