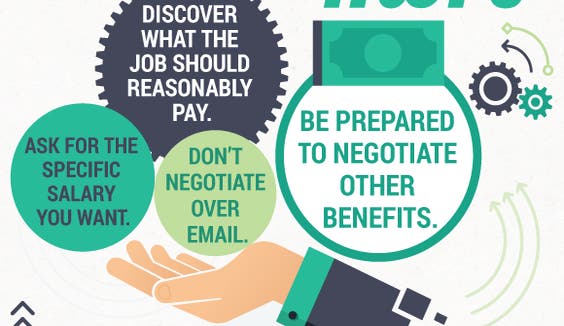 According to Salary.com, 84 percent of employers say they expect job applicants to negotiate salary. But similar research, this time from CareerBuilder, found that only half of applicants actually do, instead taking the first offer extended to them. This is a clear mistake.

Research shows that employees who negotiate can increase their starting salaries by an average of $5,000. That figure is, of course, compounded over the course of a career, as one salary builds on another.

Bottom line: It almost always pays to counteroffer in case there’s room to move, says Karen James Chopra, a career counselor in Washington, D.C. “Most employers are aware that if they start out at the top of the salary range, it’s going to be harder to be accommodating in a negotiation,” Chopra says. How do you get what you’re worth? Here are four steps you should take.

Do some research. You should go into any negotiation knowing exactly what you want. Many employers will include a salary range in job postings — that means not only do you know what to expect going into an interview, but you can search to see what other jobs requiring the same skill set and level of experience are offering. Chopra also suggests reaching out to your network and asking them to give you a ballpark guess of what they’d expect a job like the one you were offered would pay. “Most people will say they don’t know, but ask them to ballpark it based on what they make and what they pay other people. It won’t be exact, but if you ask everyone you’re networking with, you’ll have a nice clustered range,” Chopra says.

Choose your words carefully. What you don’t want to be is aggressive, says Rosemary Haefner, vice president of human resources at CareerBuilder. “The appropriate way to ask is to be specific. Say, ‘I really appreciate the offer, and I’m very excited. Based on the conversations we’ve had, you’ve said that the most important qualities for this job are X, Y and Z. This is what I bring to the table. Based on that experience, I really think I’ll hit the ground running, so would you consider adding $5,000 to the salary?'”

Read the room. Chopra says you always want to negotiate in real time, either on the phone or face-to-face — never over email. “Otherwise, you allow the employer to cherry-pick. If you list your demands in order, they may give you the least important instead of the most. You also can’t keep track of how the employer is reacting and change your approach.”

If you’re talking, you can ask for one thing at a time, read their feedback, and continue pressing the issue only if they continue to seem open to the negotiation. You can tell when you’ve pushed too far.

Have a backup plan. Some employers may truly be tapped out when it comes to their budget for salaries. If you still want the job, be prepared to negotiate for other benefits. Perhaps you’d like to telecommute one day a week, or increase your bonus potential, be vested in the employer retirement account earlier, or ask that the employer pay for you to attend an MBA program. “Pretty much anything can go into the negotiation pot,” Chopra says. She’s even had clients negotiate to work only four days a week when they thought they could complete the work in less time and the salary wasn’t enough to cover five.