Study: BMW drivers are the worst 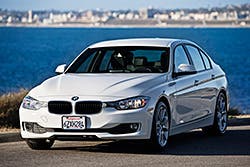 Maybe  “Glengarry Glen Ross” writer David Mamet was onto something when he had Alec Baldwin’s abusive and famously foul-mouthed character brag about his “$80,000 BMW.”

Turns out there’s substantial scientific evidence that BMW drivers are some of the most aggressive and selfish on the road.

A study conducted in 2012 by researchers at the University of California, Berkeley, and the University of Toronto examined driver behavior at a four-way intersection and crosswalk on busy roads in California. Drivers were graded on criteria such as whether they cut in front of other drivers or stopped for pedestrians in a crosswalk.

In general, luxury-car drivers were the least likely to be kind to other drivers and pedestrians, but BMW drivers earned a special mention from Berkeley researcher Paul K. Piff.

“One of the most significant trends was that fancy cars were less likely to stop,” Piff told Benjamin Preston of The New York Times. “BMW drivers were the worst.”

Maybe that penchant for aggressive driving has something to do with why the BMW 3 Series and BMW 7 Series hold spots on the Insurance Institute for Highway Safety’s list of the top 10 models that generate collision insurance losses for car insurance companies.

So the next time you’re walking or driving down the road, you might want to give any cars with blue and white roundels, and their drivers, a wide berth.