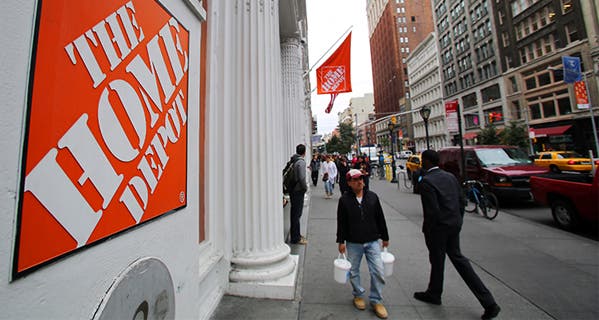 Hackers may no longer be stealing information from Home Depot, but the effects of the massive data breach in the retail company’s stores continue to hang over the banking industry. The Independent Community Bankers of America reports that community banks have been forced to reissue nearly 7.5 million debit and credit cards due to the data breach. Issuing all those new pieces of plastic has cost a pretty penny. The ICBA estimates the data breach has cost community banks upward of $90 million.

Buhrmaster and the ICBA are lobbying Congress to reevaluate how much retailers should pay when their systems are hacked.

“We continue to advocate that the costs associated with data breaches be borne by the party that experiences the breach,” Buhrmaster said. “Communities and customers should not suffer for the faults of retailers.”

It’s been a troublesome year for anyone worried about keeping personal financial information secure. From Home Depot to Staples to the U.S. Postal Service, some major companies have suffered serious cyber attacks while hackers have profited from debit and credit card numbers. As those criminals grow ever more sophisticated with their efforts to steal sensitive data, other members of the banking industry have also stressed that retailers should shoulder more of the costs when a data breach occurs.

“While these breaches are costly for all banks, they have an especially significant impact on community banks that experience disproportionately higher card reissuance costs,” Frank Keating, President and CEO of American Bankers Association, wrote in an editorial letter to The Economist in November. “Worse still, institutions generally receive almost no reimbursement from retailers.”

Are you doing enough to keep your data safe?

Hackers seem to be getting better at cracking payment systems, but many consumers are not improving their efforts to keep their account numbers confidential. A recent survey conducted by IT firm EMC shows that 45 percent of consumers have not changed their debit or credit card behaviors, and 69 percent say they use the same password for more than one mobile device or website. As retailers continue to work to fend off hackers, you can take additional steps to safeguard your information, too. Check out “7 Ways To Protect Yourself From ID Theft.”