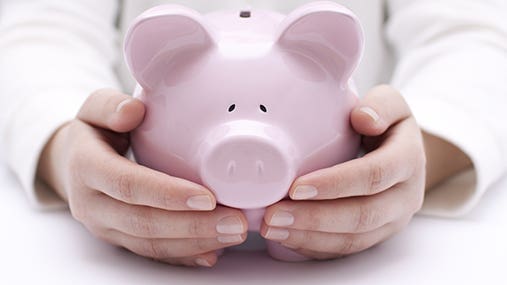 In less than three years, Carrie Rocha and her husband, Marco, paid off $50,000 of nonmortgage debt and accumulated a six-month emergency fund and other savings by clipping coupons, buying store brands and reducing unnecessary expenses.

Rocha, of Maple Grove, Minn., says the couple realized they were spending more than they made and started cutting expenses across the board. But rather than tackle huge expenses, they started small.

Thrift gurus long have espoused the wisdom of pinching pennies because of its potential to add up to big savings.

But do clipping coupons and just saying “no” to the daily $4 latte really make a difference in the long run? Or is it big stuff — such as downsizing a house or getting rid of one car — that really helps families save?

The answer depends on your circumstances, tolerance for doing without and self-discipline.

Danny Kofke, author of “How to Survive (and Perhaps Thrive) on a Teacher’s Salary,” is a big believer that trimming small expenses can add up to big savings and better spending habits.

Kofke and his family of four in Hoschton, Ga., have been able to live exclusively on his $37,000 a year salary — and save money — by making adjustments to small expenditures, such as switching to cheaper cell phone plans, using the library instead of buying books and making their own coffee at home.

Saving money on little things has a snowball effect that can lead to better financial habits, he says. Once people cut down on a few things and see the positive financial impact, they are often motivated to cut back on the big stuff.

“Small steps are the best way to form habits that will stick,” Kofke says.

Saving money is like losing weight, Kofke says. Trying to make drastic, wholesale changes can quickly become discouraging. However, if you cut back a little at a time, you’ll have better success.

“Small steps are the best way to form habits that will stick.”

While he acknowledges that big expenses can pose outside risks to a person’s financial stability, he contends that it’s a mistake to overlook the power of trimming back on smaller spending.

“I know many people who got into trouble because they bought big-ticket items they could not afford,” Kofke says. “But I think those smaller everyday purchases also played a major role in our country’s economic problems.

“Little things do add up.”

However, not everybody subscribes to the smaller-is-better approach.

“Pinching pennies is the most emotionally draining way to save,” says Rebecca Schreiber, a Certified Financial Planner with Solid Ground Financial Planning of Silver Spring, Md.

What works better — and faster — is to downsize big expenditures in life. Schreiber says savers get a bigger bang for their frugal buck by moving out of a big house and into more modest digs, or selling a second car.

“Small savings, aka ‘the latte factor,’ are largely false economizing and have led many Americans into their current financial crisis,” says Yeager, a full-time writer who previously worked for 25 years in Washington, D.C., managing nonprofit organizations.

Penny-pinching alone is “cut from the same cloth as fad diets” and does not fundamentally change a spender’s habit of living beyond his or her means, Yeager says.

“Small savings … are largely false economizing and have led many Americans into their current financial crisis.”

Instead of penny-pinching, Yeager recommends scaling down in more dramatic ways. He recommends never trading up from your house and instead paying off your current home as fast as you can. In addition, he suggests living on roughly the same amount of money year after year despite any increases in income.

“Unlike our peers who have gone to bigger and more expensive houses, we’re still in our starter home,” says Yeager, 51, who is married with no children.

He and his wife, Denise, have finished paying the mortgage and carry zero consumer debt. Lacking a mortgage payment, the couple was able to quit their jobs and work at what he calls “selfishly employed” ventures they love.

While Yeager says he is not opposed to pinching pennies — he will rarely buy food that is over $1 a pound — he says that his philosophy is to pinch the dollars ” … and the pennies will pinch themselves.”

“There are endless discussions about coupon clipping and saving 10 percent off this and that … but the question is really this: Do we really need all this stuff? What happens if we don’t buy it?” says Yeager, who adds that the key to saving is simply to spend less than what you earn.

Of course, if you want to supercharge your savings, it may pay to both penny pinch and downsize.

“Everyone should pinch pennies no matter what your situation to ensure you live well below your means,” says Harrine Freeman, a personal finance expert, speaker and author of the book “How to Get Out of Debt.”

Living a frugal lifestyle no matter what your financial situation will prepare you for any money crisis that may hit without having to make drastic lifestyle adjustments, she says.

Start with small steps, Freeman says. That includes everything from saving coins in a jar, using coupons, shopping the sales, eating at home — and, yes, even forgoing the $4 latte.

Eventually, savers can graduate to bigger steps, such as downsizing a house or car, or eliminating luxury expenditures such as expensive vacations.

Rocha agrees that ultimately, a healthy dose of frugality both in the little and big stuff really makes savings pile up.

“For most people, it is not how much you make, but rather how well you plan and spend your money that leads to financial success,” Rocha says. “This philosophy has enabled us to save and live a very wealthy life on a moderate income.”