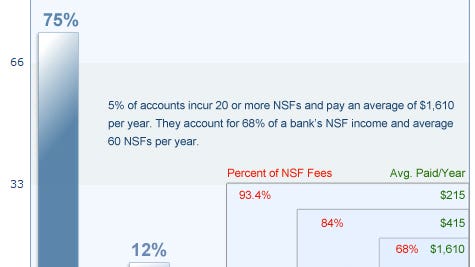 Banking customers may have already received notices alerting them to the fact that their bank account may be a little different this summer.

Beginning July 1 for new accounts and August 15 for existing accounts, banks will no longer automatically provide ATM and debit card overdraft protection. Instead, customers will have to opt in, or sign up specifically saying that they want the service.

Overdrafts triggered by checks and ACH transfers, for instance payments to bills, will still be automatically covered.

That means when making a debit card purchase or withdrawing money from the ATM, your transaction will be declined if it will put your bank account balance into the negative.

Most consumers will feel little impact

The move will be welcome news for anyone who’s forgotten about a check and racked up five or 12 overdraft fees on debit card purchases. People like that are in the minority, however.

For most Americans, the new overdraft protection regulations will have little to no direct impact beyond affording them a bit more control over their overdraft options.

In fact, most of the population has never had an overdraft at all according to Bill Handel, vice president of research at Raddon Financial Group, a financial industry consulting firm in Lombard, Ill.

The firm has found that consumers fall into one of three categories of overdraft behavior.

“Some people are very good at managing their money, they never have any overdrafts ever. They make up about 70 (percent) to 75 percent of U.S. population,” Handel says.

Another chunk of the country, approximately 15 percent to 20 percent of the population, falls into the incidental overdrafters group. They tend to rack up, on average, about six overdraft incidents per year.

And then there are the habitual overdrafters who have seven or more overdraft incidents per year.

They only make up about 10 percent of the population, says Handel.

And the amount of money banks take in from overdraft fees is not insignificant.

Further, the study projects that the new regulation will cost financial institutions about $7.3 billion in fees.

A return to customer service?

Though a minority of accounts pay the majority of the fees, any strategies to make up the shortfall in fee income will affect a broader swath of the population.

How banks will charge to mitigate the lost revenue remains to be seen, though there are many theories on what will happen.

In advance of the changes, banks are communicating with their customers to convince them to opt in. But its unlikely that they’ll get 100 percent of their clients onboard.

“All evidence from banks and financial institutions is that it’s a very slow process to get their customers to sign up for something, even things that are in the customer’s best interest,” says Handel.

“Things like electronic statements — they make sense for the consumer but it takes a long time to get acceptance and I think you’re going to find the same thing with this. Banks are going to have a big gap with their income stream and its coming at a difficult time for them,” he says.

Handel anticipates banks taking a three-step path in response to the new rule.

The first will involve educating customers on the opt-in process and bank overdraft protection. Some people appreciate the service and banks will find them.

“Step two, they are going to have to take a look at how they have structured their checking accounts, the issue of free checking is very cyclical in nature,” says Handel.

“The reason it’s been able to survive was because of the income generated from NSF (nonsufficicient funds) and overdraft programs,” he says.

Instead of a no-strings attached checking account, customers may find some strings; for instance, a required number of debit card purchases per month, direct deposit or a minimum required balance.

“The bank has to say, ‘Well if I can’t use that income to make my bottom line work, let me get back and sell better products,'” says Handel.

Bert Ely, principal at Ely & Co., an Alexandria, Va.-based consulting firm to financial institutions, believes it could take some time before the full impact of the changes settle in.

“We’ll see a variety of experiments. It’s going to take a couple of years for things to settle down in retail banking in terms of cost and price implications of these new rules,” he says.

With a diminishment in those fees, something has to change for banks to keep their own accounts in the black.