How will the presidency of Donald Trump affect the global economy? 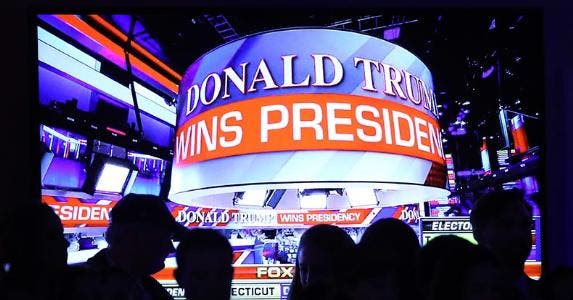 This is not just a U.S. thing. People around the globe are wondering what the election of Donald Trump will mean for them.

There’s a reason for that — even more so than in past presidential elections. The president-elect has proffered major positions on trade, immigration, defense and climate change, among other things that impact those outside U.S. borders.

Let’s start with what may have shaken investors abroad first thing Wednesday morning, when the results of an unexpected Trump win were finalized. The Dow Jones industrial average tumbled 800 points in futures trading. The S&P 500 dropped 5 percent overnight and trading was halted.

Then, the Dow recovered and soared near record levels, finishing up 250 for the day. That’s a much faster recover than when trading plummeted for two days after Britain’s Brexit vote in June.

The dollar in play

Still, there’s plenty to worry about if you’re a global player in investment and finance.

“Given the dramatic shifts in political power, there are swings in the economic outlook, with trade, the U.S. dollar, the Fed and fiscal spending being the primary drivers of the near-term economic effects,” says Sam Rines, senior economist and portfolio strategist at Avalon Advisors LLC.

Indeed, the euro, peso and Canadian dollar were trading lower against the dollar after Trump’s election.

“The U.S. dollar is a wild card,” Rines says. “This is noteworthy given that China is likely to allow the RMB (its currency, the renminbi) to fall significantly at some point.”

He says if China perceives that its trade with the U.S. is threatened, it would be well served to begin a devaluation sooner rather than later.

“China has been labeled a currency manipulator during the election, and this gives it little reason to hold the line. China’s reserves would also be buffered in the case of a trade war,” Rines says.

In addition to the dollar, trade and fiscal rhetoric, health care and tax reform and the Federal Reserve “will be the linchpins to understanding how the global economy unfolds in the next couple of months,” Rines says.

Trump has pledged to increase trade protectionism and reduce immigration — policies that would simultaneously weaken economic growth and increase inflationary pressure. It would seem like the Trans-Pacific Partnership (TPP) and the Transatlantic Trade and Investment Partnership (T-TIP) would be easy targets.

“It is plausible that the new administration will not ramp up tariffs on Mexican and Chinese imports — content instead to bury the prospect of new trade agreements and make more use of enforcement clauses in existing agreements,” Lawson says.

RATE SEARCH: If you’re moving to a job with higher wages, and are looking for a house, you’ll find the best mortgage rates today at Bankrate.com.

Jack McIntyre, CFA and portfolio manager at Brandywine Global Investment Management LLC, says Mexico might even see a boost in the long run from a Trump presidency, with the U.S. as its biggest trading partner.

“If a Trump administration is supportive of better economic growth … Mexico with its trade linkage should benefit from an acceleration in growth in the U.S.,” McIntyre says.

Still, Bob McMillan, chief investment officer of Commonwealth Financial Network, worries about the consequences if Trump takes his positions on trade to the extreme.

“Trade policy will be a particular area of concern, as what actions Mr. Trump plans to take on NAFTA, for example, could impact the supply chains of many companies and therefore affect the market,” McMillan says.

To be sure, if protectionist policies take hold not only in the U.S. but around the world, it could blunt economic recovery in the European Union, China and Japan where central banks have tried to inject their economies with cheap money.

“Undoubtedly, the anemic recovery will get even more so. The world simply has become much smaller,” says Jeff Reeves, analyst and executive editor at InvestorPlace.com.

“Governments — well, voters — are primarily concerned with protecting their home turf. But the more walls and protections that you build around your nation, the less opportunity there is for a rising tide to lift your boat,” Reeves says. “And, sadly, the Western world is not living in a time of plenty.”

The risk of uncertainty

Avalon Advisors’ Rines says if there is volatility in global asset markets as well as in the value of the dollar and in economic growth, the Federal Reserve may have to back off any plans to raise interest rates until 2017. The world also will be watching who will run the Fed, as Federal Reserve Board Chair Janet Yellen’s term ends in 2018.

Greg McBride, CFA, chief financial analyst for Bankrate.com, says the real impact on global trade is still to be determined. But where Trump can have an immediate effect is on the risk of uncertainty.

“In times of uncertainty, businesses don’t spend and consumers cut back. Greater clarity on policy will alleviate uncertainly and its headwind on the economy,” McBride says.

Greater clarity on policy will alleviate uncertainty and its headwind on the economy.

Flesh out a stock-picking strategy?

“I’d avoid this notion of projecting forward for four years based on initial market reaction to the election of Donald Trump,” McBride says. “A growing economy is what will ultimately boost corporate profits and stock prices.

“And bonds are a risky proposition in an environment where yields are low, inflation is picking up and central banks are scaling back their stimulus. Little to none of that is contingent on who the president is,” he says.

Perhaps the biggest reason that it is so hard to predict Trump’s impact on the global economy is Trump himself.

“We don’t know who the real Donald Trump is just yet,” Brandywine Global’s McIntyre says.