4 min read Published August 16, 2022
How is this page expert verified?

About our Review Board
Written by
Cathleen McCarthy
Written by Cathleen McCarthy Senior Editor
Cathleen's stories on design, travel and business have appeared in dozens of publications including the Washington Post, Town & Country, Wall Street Journal, Marie Claire, Fodor’s Travel, Departures and The Writer.
Cathleen McCarthy
Edited by
Brady Porche
Edited by Brady Porche Editorial Director
Brady Porche is an editorial director for Bankrate Credit Cards and CreditCards.com. He has two decades of professional experience as a writer and editor.
Brady Porche
Reviewed by
Liliana Hall
Reviewed by Liliana Hall Associate Editor
Liliana is an editor and journalist with a background in feature writing on the Bankrate Credit Cards team.
About our review board
Liliana Hall

Long-distance relationships can mean a lot of hours (and money) spent in airplanes and airports. But with the right credit card or two, all that flying can net some serious travel rewards.

What better way to use those rewards than to book a luxe vacation for two on a tropical island – or, better yet, two Greek islands and a tour of Athens?

That’s what Bankrate senior director of SEO James Sackor did this year, by combining the rewards and perks earned from two of the best American Express cards. Here’s how.

Sackor was accumulating points by using The Platinum Card® from American Express to book flights every month. “My girlfriend and I live in different states, so getting 5X points on every flight booked to visit her was very helpful,” says Sackor. “And the points were starting to rack up.”

Sackor had been an Amex Platinum member for a few years. He used his Membership Rewards points sparingly, so he had quite a pile stashed away.

Then Amex raised the annual fee on the Platinum card from $550 to $695 last year.

“I happily stomached the $550 because the opportunity to earn rewards points and special member benefits were worth it to me,” he says. “I was not happy with the increase to $695 in 2021, but decided to keep the card. I still think the value of the benefits are worth it.”

The Amex Platinum benefits Sackor uses the most include:

All these benefits come in handy with a long-distance relationship, especially if you redeem the rewards for overseas travel. Spread over four years, the Global Entry fee saves Sackor $25 annually. Added to the rest of the perks he uses most, that comes to $784 worth of benefits per year. Add the cash he saves with Amex Offers and Pay with Points, and he comes out well ahead of the $695 annual fee.

Those hotel upgrades and Global Entry turned out to be especially useful on the trip to Greece, and travel is one of the best ways to redeem Amex points. He now has two-thirds of the Amex trifecta, but these two cards may be all he needs to maximize his international travel dreams.

Combine Membership Rewards from another card

“I was looking for a new card and in my research, I realized Amex allows you to stack points from multiple cards,” he says. “So I signed up for the Amex Gold, with the goal of collecting that sign-up bonus and combining it with my current Amex points to use for a big travel purchase or upgrade.”

The Amex Gold came with a $250 annual fee, but its rewards and benefits — including $120 in dining credits, $100 in credits with The Hotel Collection and up to $120 in Uber Cash — complement the Platinum nicely.

“What I like most about the Amex Gold is the 4X points on restaurants and grocery stores,” says Sackor. “With that and the Platinum travel benefits, I’m earning rewards for most of my daily purchases.”

As soon as he banked his bonus, he and his girlfriend started scouring vacation deals online and found a two-week trip to Greece that included multiple flights, hotels and transfers.

“Given that we were bouncing between Athens, Santorini and Mykonos, we quickly saw the value in just booking everything at once and paying one fee to one company,” he says.

In the week leading up to the trip, however, they took a closer look at the accommodations included in the package, and began to lament the hotel they’d booked in Santorini. “It didn’t seem like a bad hotel, but given the beauty of the island, we wanted our lodging to match the beauty around us,” Sackor says.

So he started exploring options on the Amex website to see if he could use his points for a resort stay instead.

“I started looking through the Amex Travel portal, searching their Fine Hotels & Resorts Collection options, and came across Andronis Concept Wellness Resort,” he says. “This place looked amazing! And it would really be an upgrade from what we already had booked.”

He had enough points left to book three nights, and they were thrilled on arrival. The Adronis has an infinity pool, 24/7 concierge, on-site restaurant with fine dining and sunset views. Their suite had a private balcony facing the ocean. “It was unlike any place either of us have ever stayed,” Sackor says.

Since Sackor booked the hotel with his Amex Platinum, they were also given a $100 credit to the restaurant, a $60 spa credit and a welcome gift of wine and cookies. “We truly felt welcomed and got to live a taste of the luxurious lifestyle in a way neither of us could afford in our day-to-day lives, thanks to the Amex points I accumulated,” he says.

Sackor is looking forward to exploring other ways to book travel with his Amex Platinum. This trip to Greece reminded him why he has rewards cards in the first place: to allow himself (and his girlfriend) to travel in style. “This is my main purpose for using my cards,” Sackor says. “I want to accumulate points for travel upgrades, particularly to experience the world in ways I would not be able to normally.”

SHARE:
Written by Cathleen McCarthy Senior Editor
Read more from Cathleen
Cathleen's stories on design, travel and business have appeared in dozens of publications including the Washington Post, Town & Country, Wall Street Journal, Marie Claire, Fodor’s Travel, Departures and The Writer.
Edited by
Brady Porche
Edited by Brady Porche Editorial Director
Brady Porche is an editorial director for Bankrate Credit Cards and CreditCards.com. He has two decades of professional experience as a writer and editor.
Brady Porche
Editorial Director
Reviewed by
Liliana Hall
Reviewed by Liliana Hall Associate Editor
Liliana is an editor and journalist with a background in feature writing on the Bankrate Credit Cards team.
About our review board
Liliana Hall
Associate Editor 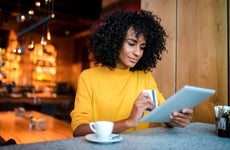 How to maximize spending with Amex Offers 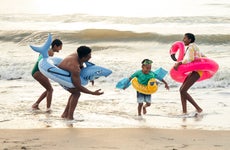 How to use your Amex Platinum points for a summer vacation 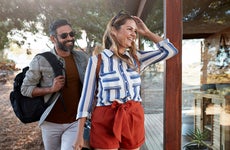 How to maximize your rewards strategy with the American Express trifecta 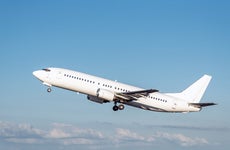 How to maximize your Amex airline fee credit