Strike it rich (or not) with a prize-linked savings account 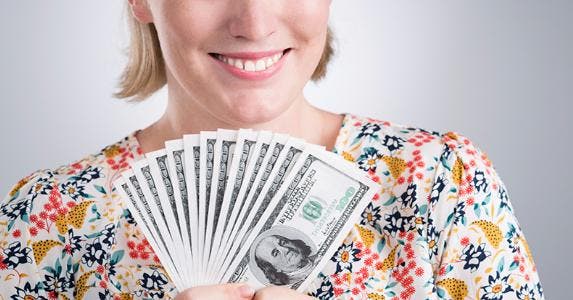 What if you could purchase a lottery ticket without spending any money?

With a prize-linked savings account, you could actually win big bucks just for saving a few pennies. And programs that give people prizes for saving money could be coming soon to a bank near you, thanks to federal legislation signed into law at the end of 2014.

The American Savings Promotion Act allows banks and thrifts to establish prize-linked accounts in any state that approves these programs. Previously, federally insured banks were forbidden from offering savings promotion raffles because of rules aimed primarily at organized crime.

Prize-linked savings isn’t a new phenomenon. The practice has flourished in other countries, and the U.K. has allowed lottery-driven savings for more than 50 years.

In the U.S., these accounts were first offered starting in 2009 at select state-regulated credit unions. Prize-linked savings is now available in 10 states.

Organizations built these programs on the idea that people would rather spend their money on lottery tickets than on personal savings. In 2014, Americans spent more than $70 billion on lottery tickets, according to the North American Association of State and Provincial Lotteries. Meanwhile, about 1 in 4 Americans has no emergency savings, according to a June 2014 Bankrate survey.

“A big challenge is that saving is not much fun. For a lot of us, it’s the antithesis of fun,” says Timothy Flacke, executive director of the Boston-based D2D Fund Inc. D2D helped design Save to Win, the nation’s first large-scale prize-linked savings project.

How it all works

The winnings and rules vary, but most programs raffle off cash and prizes to individuals who contribute to a savings account.

Every time you save a certain amount, you earn a chance to compete for various prizes. In the Save to Win program, each $25 deposit earns you an entry into the prize drawings, and you can receive up to 10 entries a month.

Anyone 18 or older can open a prize-linked savings account, but the programs have been especially popular with lower-income individuals who struggle to save.

The programs are designed to help participants develop a regular saving habit.

“This gives people a safety net. So when the inevitable bumps in the road do come along, it’s not a catastrophe. It’s just an inconvenience,” says David John, senior strategic policy adviser for AARP’s Public Policy Institute and co-author of a report on prize-linked savings for The Heritage Foundation.

Because it is not an investment account, there is no earned interest on prize-linked savings. “The fact that you did not receive $1 or $1.50 for every $100 you put in is offset by the fact that every two or three years you win $25 or $30,” John says.

Prizes come in many sizes

It might not be the Powerball, but winnings can be substantial, with most programs awarding five-figure grand prizes and a few offering six- and even seven-figure jackpots.

Often there’s one grand prize a year, but there are dozens of smaller monthly and quarterly prizes ranging from $10 to more than $1,000.

“It feels like found money. It’s not something that’s going to make anybody rich, but it’s enough that people who receive these winnings are genuinely thrilled,” John says.

A $2 million jackpot is on the table for participants in the San Francisco-based for-profit SaveUp program, which awards members for saving and paying down debt.

The program also raffles off vacations, merchandise and other cash prizes. The odds for winning the $2 million jackpot are 1 in 170 million (only slightly better than the odds of matching the winning numbers in Powerball), but 1 in 4,133 for a $10 prize.

As with all cash awards, winners of any program still have to pay state and federal taxes on their prize money.

“Save some money, and you’ll be rewarded with a small, large or no prize,” D2D’s Flacke says. “But even if you don’t, you still have your savings, and you’re better off.”

They’re not everywhere, yet

The American Savings Promotion Act has set the stage for large banks and other financial institutions to use prizes to encourage savings. But it could take some time for these programs to go mainstream.

The AARP’s John says prize-linked savings likely will be of interest first to small to midsize credit unions that serve a low-income population before any of the major financial institutions start to offer them. And because of the lottery aspect of these accounts, institutions will have to adapt to new accounting methods.

But you don’t have to wait if you live in one of the 10 states where prize-linked savings programs have been in place for a few years. Institutions already offer them in Connecticut, Indiana, Maine, Maryland, Michigan, Nebraska, North Carolina, Rhode Island, New York and Washington.

Fees are unlikely … for now

There are no known monthly service fees attached to the existing prize-linked savings programs available through credit unions.

But even though you might not have to pay to play now, there’s no telling whether monthly service fees will come into play once the big banks get involved.

“Frankly, I’m always a little bit nervous about consumer protection. And the financial service industry is set up in large degree to be contrary to the best interest of the average investor,” says Brad Klontz, a CFP professional and clinical psychologist with Occidental Asset Management LLC in Burlingame, California.

Different states will design their laws in different ways, but the marketplace could

also dictate whether there’s a place for fees. Whether or not banks introduce fees could hinge on what other savings options are available in the marketplace.

“In many markets there are good, solid savings options in place today. So if a product comes to market with excessive fees, people are not going to want to use something like that,” Flacke says.