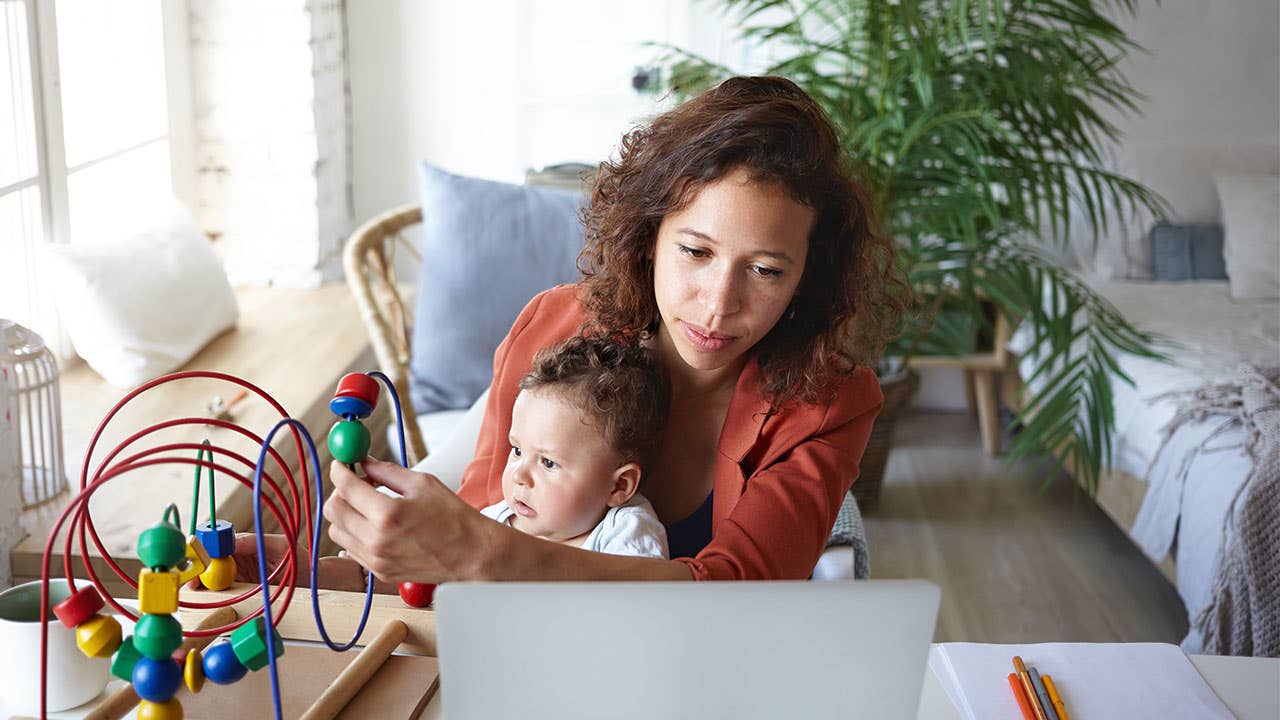 If you haven’t opened an online savings account, you’re likely missing out on extra cash.

Without the overhead expenses that come with operating a branch, digital banks can pay more interest. Today’s best online savings accounts pay more than 2 percent APY. By opening one of these accounts, the average American could earn up to $200 more in a year.

But according to Bankrate’s latest survey, nearly 7 in 10 Americans (69 percent) have accounts paying less than 2 percent APY.

Earning more interest on your savings is easier than ever, but many of us are choosing instead to keep our money in accounts that make it harder to quickly reach our financial goals.

Missing out on free money

Bankrate polled 1,000 consumers across the country to find out how much interest they’re earning on their savings. In addition to the consumer survey, we pulled data on 60 federally insured online savings and money market accounts from 57 different financial institutions. Nearly all of the accounts (92 percent) are available to customers nationwide, and most (87 percent) pay at least 2 percent APY. Despite their widespread availability, however, few Americans are taking advantage of these high-yield online accounts.

Just 14 percent of Americans report having savings accounts paying more than 2 percent APY. That’s slightly higher than the proportion of savers who had these accounts last year (just 6 percent had them in 2018), but it’s an indication that most bank customers are leaving money on the table. 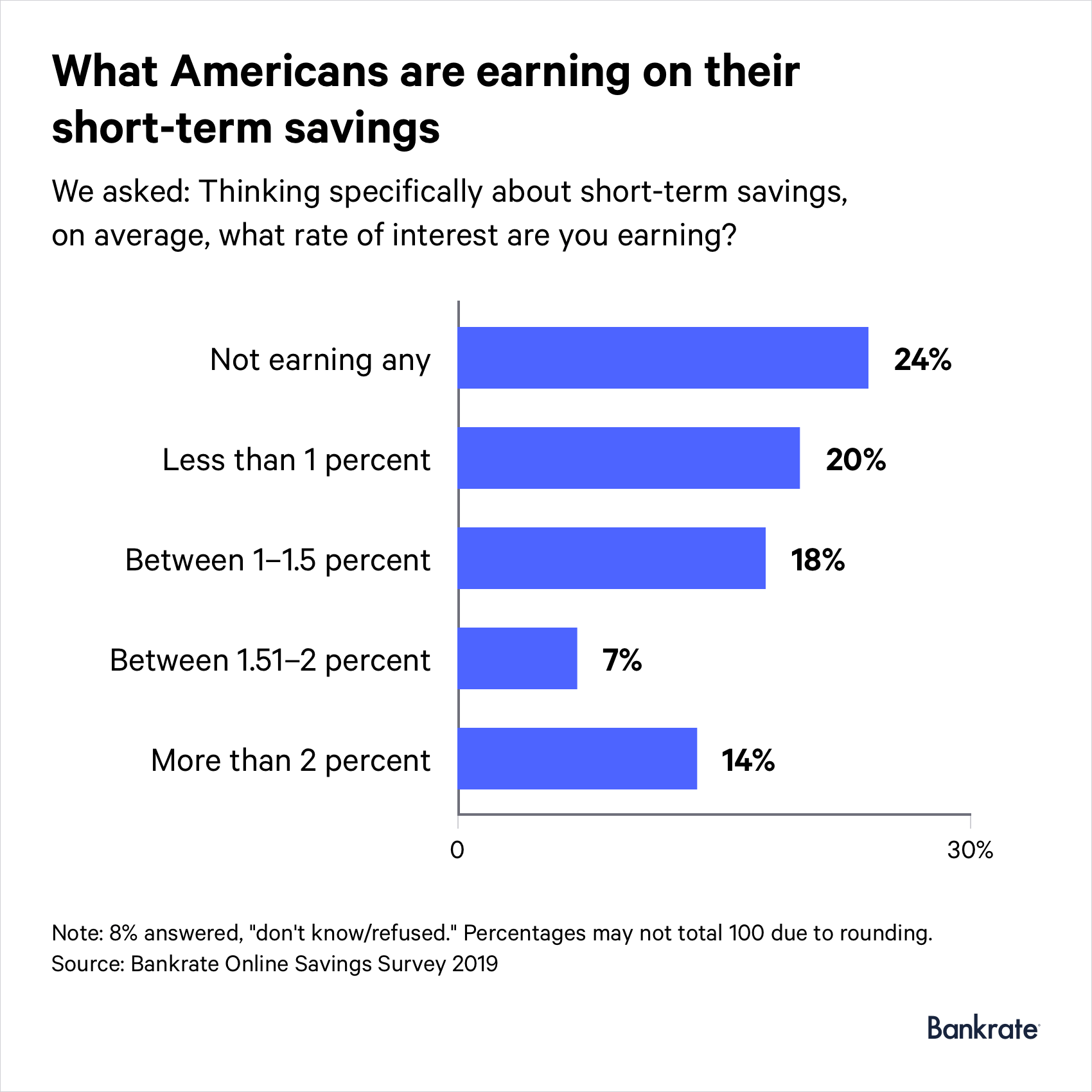 One in 5 Americans earn less than 1 percent APY. Nearly 1 in 4 (24 percent) aren’t earning any interest at all. In the long run, this could be a costly mistake.

According to the Federal Reserve, the average savings account balance in America is $8,863. If your bank pays 0.03 percent (an interest rate offered by some of the nation’s biggest banks), our savings calculator shows that the most you could earn over the course of five years is about $13. Compare that with the nearly $1,180 you could be earning over the same time through an institution paying 2.5 percent APY, like Customers Bank or WebBank.

“Beyond it being real dollars, it’s also about voting with your money. Leaving your savings in a low-yield account is basically like giving money to the bank for their bottom line, not yours,” says Catherine New, editor-in-chief at a mobile bank called Varo Money. “So it’s a kind of buried fee you’re paying.”

The most common reason Americans aren’t earning more interest: They’re comfortable with their current bank or credit union. Nearly 4 in 10 Americans (36 percent) say that’s the case. Nearly just as many survey participants (34 percent) say they would prefer to have access to a local branch.

“Good news: You don’t have to leave your current financial institution to have an online savings account,” McBride says. “Just link it to the account at your primary institution and you have the best of both worlds.” 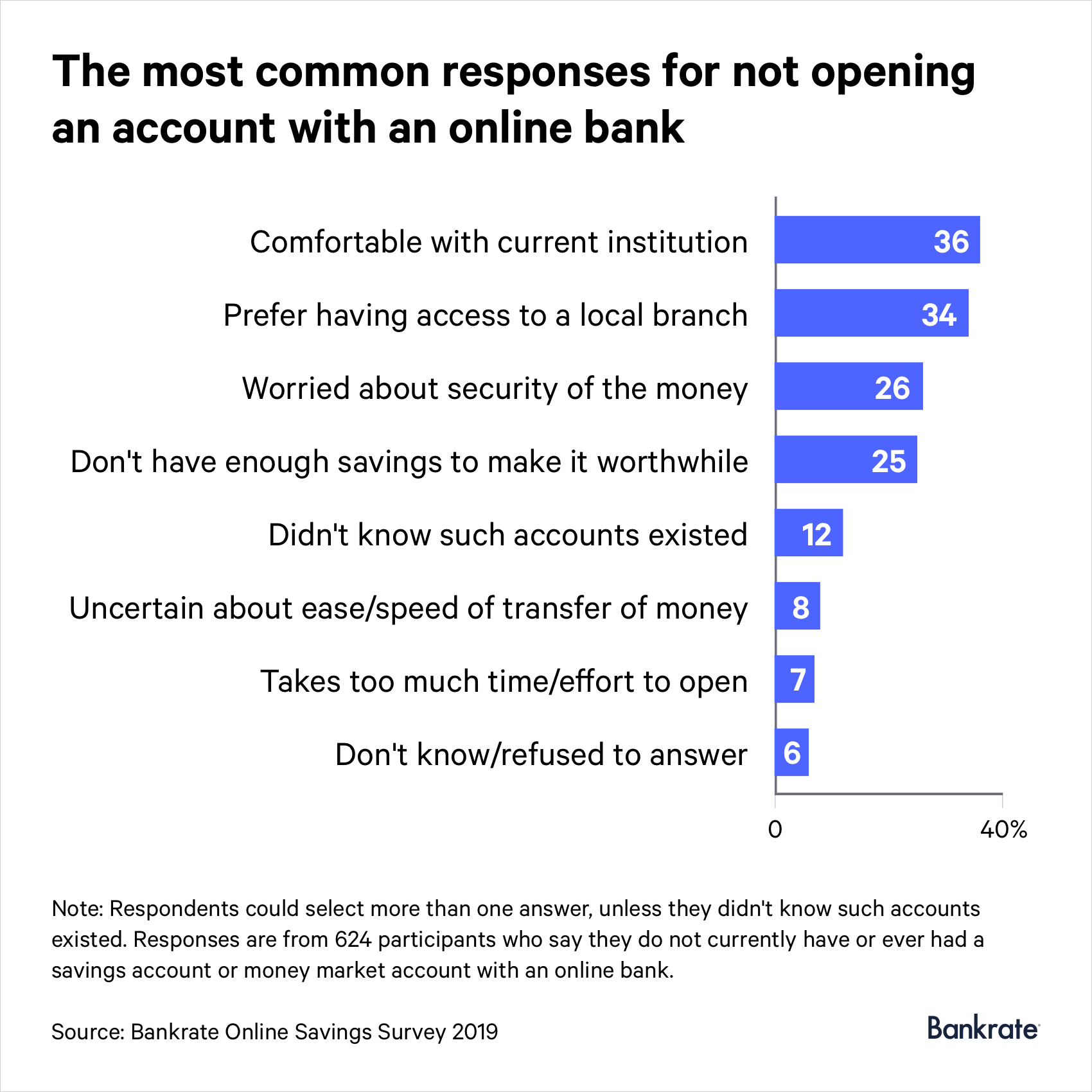 Others (26 percent) haven’t considered putting their money into online savings accounts because of some misconceptions they have about the safety of their money. But as long as the accounts are insured by the Federal Deposit Insurance Corp. or the National Credit Union Share Insurance Fund, your money is safe. If a bank does fail, you’ll be insured at least up to the standard deposit insurance coverage limit ($250,000 per depositor, per insured bank, per ownership category).

Meanwhile, 1 in 4 say they don’t have enough savings to set aside in the first place. A recent Bankrate survey found that most Americans wouldn’t cover a $1,000 emergency using their savings. But even if you barely have anything to save or you’re struggling to pay off debt, move your money into an online savings account anyway.

“Even though you don’t have the funds now, take advantage of that account,” says personal finance coach and podcaster Fo Alexander. “Get the penny because the penny is more than you had. So take the penny and make it a long-term play and watch your money grow over time.”

Failing to open a high-yield online savings account would be less of a big deal if these accounts were hard to find or had a high minimum balance requirement. In reality, it’s just the opposite.

“There is no excuse for not putting your hard-earned savings into a better-yielding account,” McBride says. “More than one-quarter of the accounts surveyed are literally available to everyone — they’re available nationwide, have no minimum deposit or balance requirements, no fees, and pay a return of 2 percent or better so you’re preserving the buying power of your savings and not losing ground to inflation.”

More than half (52 percent) of the accounts in Bankrate’s survey have a minimum opening deposit of $100 or less. And 35 percent of the accounts have no minimum deposit requirements, meaning you could get started with just 1 cent. The average yield among all accounts surveyed is 2.18 percent. 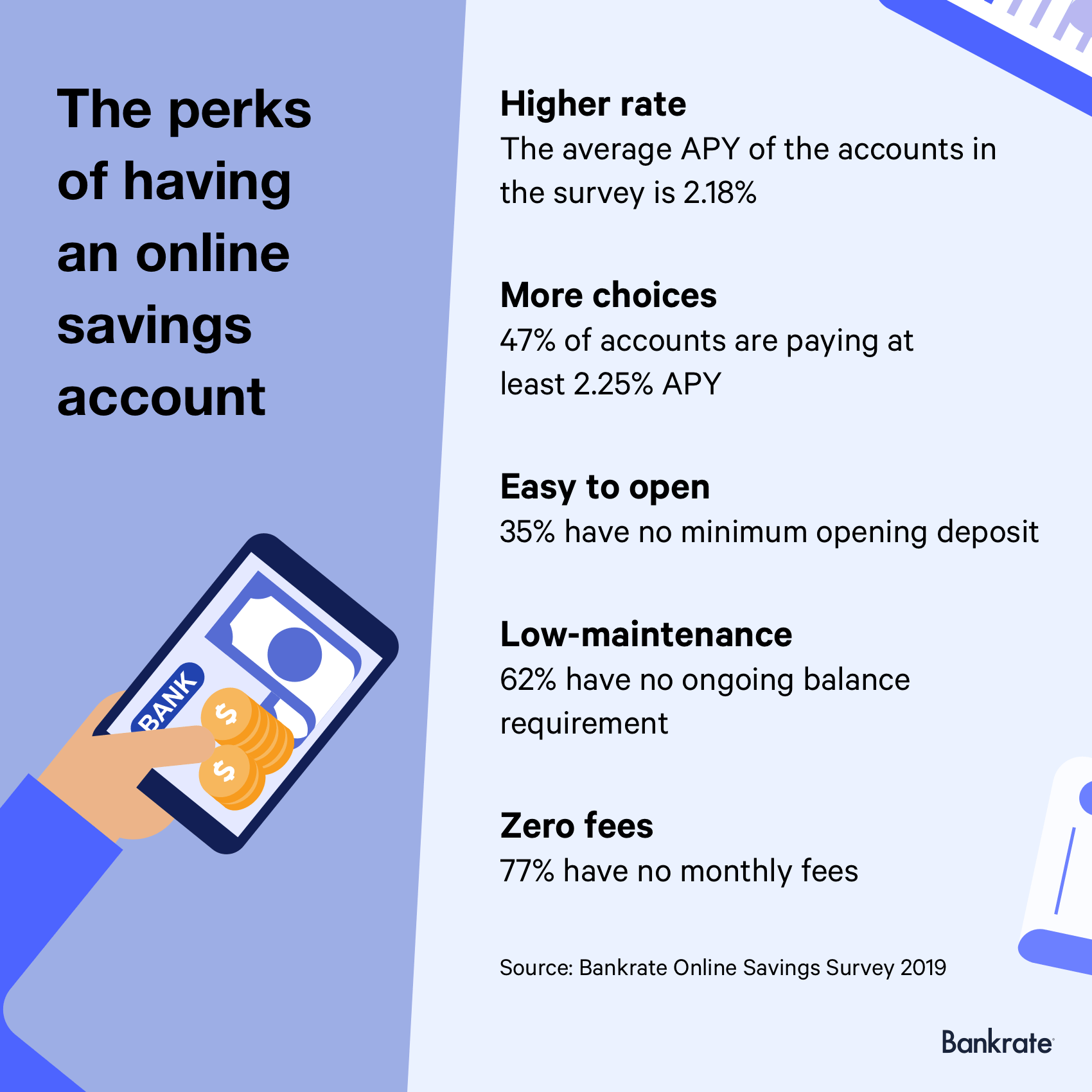 Opening an online savings account can also help you avoid fees. Ten of the 13 accounts with the highest yields don’t charge a monthly fee regardless of the size of your account balance.

If you’re concerned about accessibility, note that most of the accounts (90 percent) come from banks with a mobile app. That will allow you to check your account balance or transfer money at any time from anywhere.

“Checks may likely never completely disappear, but they will become something more rare,” says New from Varo Money. “If they are something you use several times a month, then by all means, it’s something to look for with a bank account. However, many people — especially millennials — are not using checks to make payments.”

Before you make the switch

An online savings account is the perfect place for your emergency savings fund, which experts say should ideally cover at least six months of living expenses. In addition to giving you money to turn to in a crisis, a savings cushion also helps you avoid racking up additional debt, Alexander says.

Alexander recommends doing your research and making an informed decision regardless of whether you’re opening an account online or in a branch. Indeed, while most of the accounts in the survey charge no monthly fees and have no ongoing balance requirements, it’s best to read the fine print so there are no surprises. They’re rare, but some accounts (7 percent) included in the survey have introductory savings rates that only apply for a limited time before they potentially drop.

The consumer poll was conducted for Bankrate via telephone by SSRS on its Omnibus survey platform. The SSRS Omnibus is a national, weekly, dual-frame bilingual telephone survey. Interviews were conducted from April 30-May 5, 2019, among a sample of 1,000 respondents in English (963) and Spanish (37). Telephone interviews were conducted by landline (360) and cellphone (640, including 416 without a landline phone). The margin of error for total respondents is +/-3.62 percent at the 95 percent confidence level.  All SSRS Omnibus data are weighted to represent the target population.